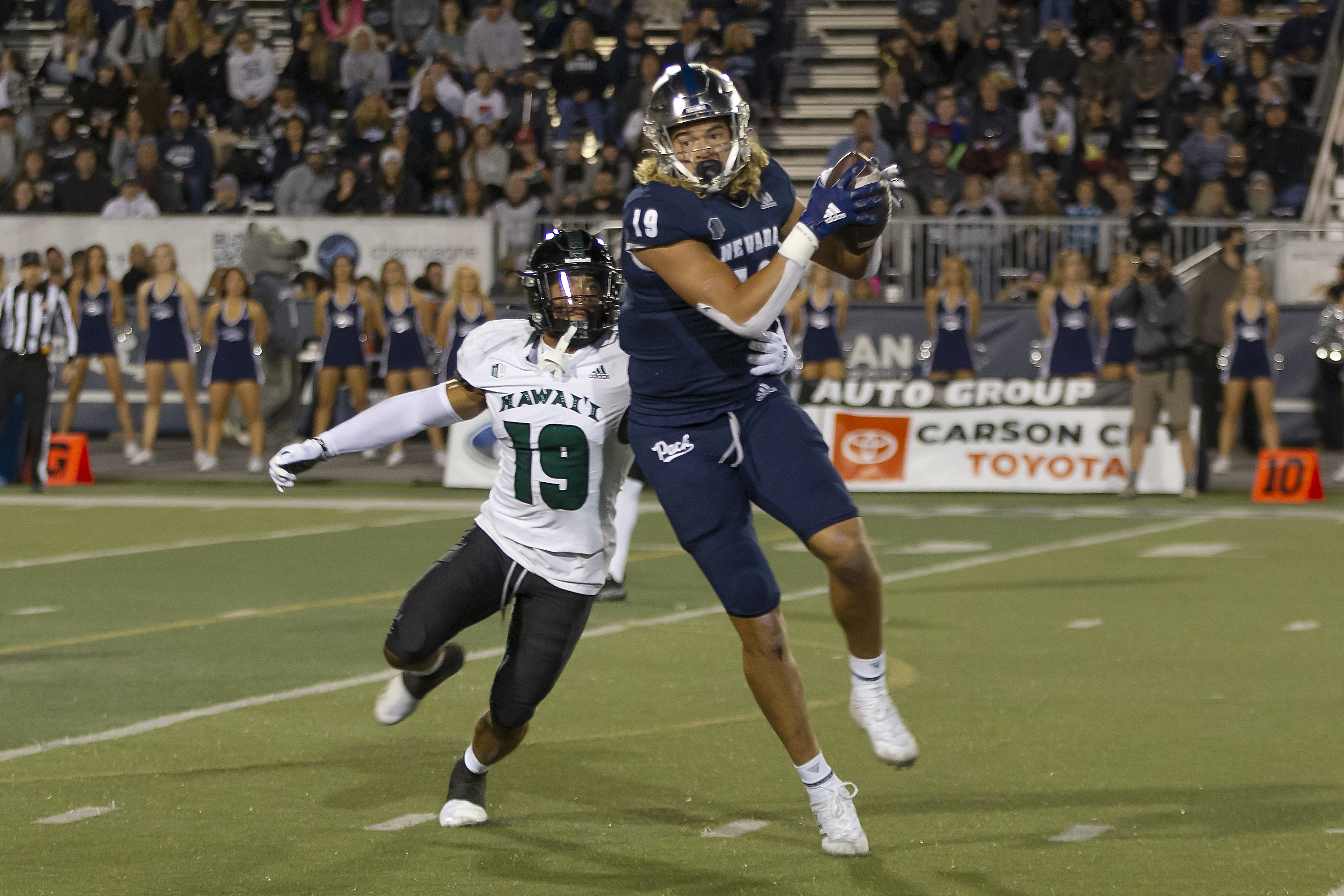 Photo by Tom R. Smedes-Associated Press
Cole Turner is one of those prospects that caught my eye watching film of Nevada Wolf Pack football as I was watching Carson Strong and this tight end just kept making phenomenal plays and his tape and production for the Wolf Pack shows that he's one of the best tight end prospects in the draft. At 6'6" and 240 lbs., Turner brings excellent length, and receiving skills to the tight end position. He has a huge catch radius even for his size and it made life for his quarterback very easy when having to quickly get rid of passes in his direction with likelihood of coming down with the pass. He's an exceptional contested catch receiver even among tight ends with his 19 touchdowns in his last 20 games and NFL teams are going to love him as a redzone target. He's a good route-runner for his size and knows how to set up his defender to get behind them and make a play. He knows how to read zone coverage and finds holes in the defense and can be a very reliable receiver when it comes to moving the chains.He's jump ball nightmare cornerbacks and safeties not because he can certainly just out reach them with his phenomenal length but he has tremendous hands as well as that haul in passes outside his frame and hold onto the football through contact and contention. He has pretty good speed for his size as well and if he gets a runway he can burn defenders deep. He's lined up at outside receiver, slot receiver, and in-line next to the offensive tackle which gives him good versatility at the tight end position. He's pretty good at boxing-out defenders when the field is shortened, such as in the red zone, and can catch difficult passes and keep his feet inbounds which is often why he's one of the best red zone targets in the draft. He's fearless going over the middle and will make dangerous catches look routine on occasion and I can honestly say that Carson Strong relied on him quite a bit when he got into trouble showing his reliability and toughness to get the job done for his team however he can.

He's an average athlete at the position and probably isn't going to scare defenders with his speed, agility or strength. While certainly a willing blocker, he lacks the power and technique to become a highly reliable presence in the run game at this point in his career and certainly is a work in progress in this area. His frame certainly needs more muscle and adding 10-15 lbs. will certainly benefit him in the long run. While catching passes in traffic certainly is a non-issue for him his somewhat slight frame can get knocked around a bit with ease both in the air and at the catch point and bigger safeties might be able to contest catches against him if they play with some rigor against him. I would like to see him get more separation at the top of his routes as most of his catches are contested with very little opportunities for him to catch and run. More straight-line speed than overall quickness and agility and rarely finds himself fooling corners and safeties on his routes. Not much of an open-field nightmare to tackle as he somewhat lacks the explosiveness and creativity to make defenders miss and some might consider him a possession receiver. He's been largely successful lesser defenders in the Mountain West with very little opportunities to prove himself against Power 5 competition.

Cole Turner should be considered a top 100 player teams draft boards and with 32 teams in the NFL I find it hard to imagine that he doesn't find a home in Day 2 or early in Day 3. A great combine performance could be what rockets him up teams draft boards but if they are paying any attention to Nevada Wolf Pack tape I find it hard that he can go unnoticed. He's got tremendous potential as a possession tight end in the NFL and if a team can improve his blocking and get up to around 250+ lbs. he could be a steal in the draft.