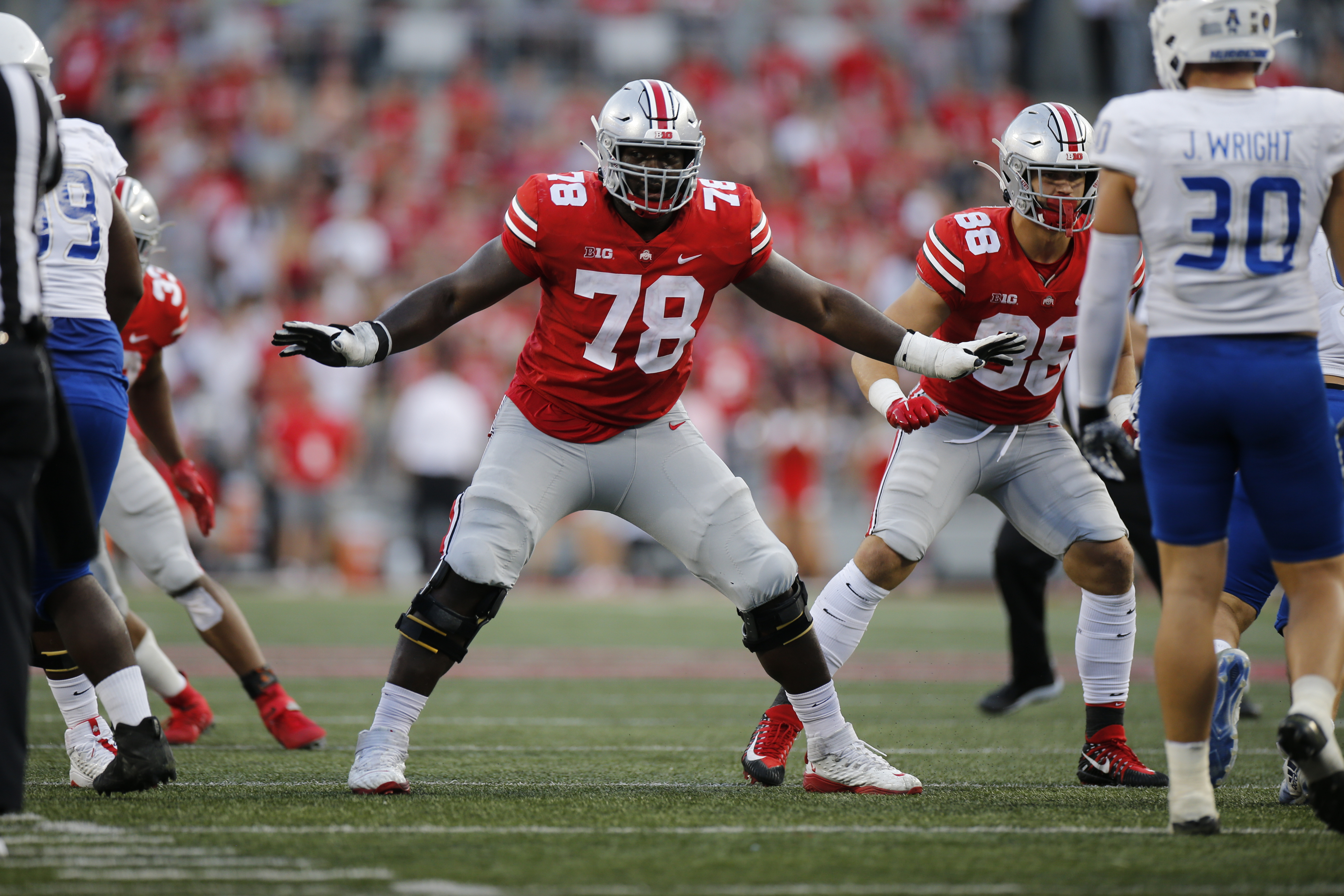 Photo by Jay LePrete-Associated Press
Ohio State's quarterback C.J Stroud had a Heisman worthy season in 2021 but Nicholas Petit-Frère sure helped keep his blindside very clean this season as well as ensure a consistent run game off the left side of the line. Petit-Frere brings excellent size at 6'5" and 315 lbs., with great athleticism and technique for the position. He possesses a very powerful and muscular frame for the offensive tackle position which makes sense considering he has gained a reported 40+ lbs. of solid muscle since he arrived in Columbus. In pass protection, displays great explosiveness out of his kick slide with good pad level off the snap. He's very agile and light on his feet and has shown to be very effective at mirroring edge rushers without giving up his inside gap. He's very good at riding defenders out of the pocket with his lateral agility and power and does a great job of staying with them and competing through the whistle to ensure a clean pocket for his quarterback. He's light footedness allows him to stay in front of his edge rusher if they attempt to cutback into his inside gap. He's a very technically sound hand fighter with great use of power and length to not only keep himself clean from edge rushers and defensive lineman but quickly grab a hold of chest pads and lock onto his opponent. He has very strong hands that can be difficult to break away from when he's got a fist full of chest pad and often can be a game ender for defenders once he has them. He has excellent power in his punch that he uses with great accuracy and timing, often resulting in edge rushers and lineman being knocked off balance or at least stunned in their rush. He has excellent blitz recognition on the edge who can pick up and neutralize blitzers without giving up his leverage on his outside rusher. His technically sound footwork and powerful base give him a great anchor against bull rushers and there are very few occasions that he finds himself ever getting walked back to the quarterback. He's very good at neutralizing stunts and twists targeted towards his gap and does a nice job of calling them out at the line. As a run blocker, he displays exceptional power in his drive and technically sound fundamentals. He comes off the ball with excellent pad level and explosiveness, often bull dozing his man off the line early and creating excellent holes for running backs to either run through or cut back into. He's at the point of attack when making contact with his opponent and will run him out of the play as far as he can until the whistle blows. He's highly effective on double teams with his leg drive and pad level and is very good at breaking off from blocks and attacking the second level. He has more than enough agility and quickness in his base to make blocks against linebackers and safeties in the second level of a defense and many of Ohio State's big runs in 2021 came off of blocks by him 10-15 yards downfield on such defenders. He has experience at both tackle positions and with his technically sound skill set I wouldn't count him out as a potential fit at guard in the NFL if teams need him to play in the interior. He possesses a very high football IQ given his advanced technical prowess and fundamentals as well as his decision making on the field and he's a very competitive high effort player as well, all of which should earn him immense praise in both workouts and interviews with teams.

He can take poor angles on blocks in the run game which can mitigate his power at the point of attack as well as leave him vulnerable to losing his balance. He can be flat-footed at times in pass protection when he neutralizes bullrushes which can compromise his ability to keep high motored defenders out of the play. He plays on an immensely talented offense with exceptional weapons and quality lineman next to him, allowing his potential shortcomings to be masked. C.J. Stroud's dual threat ability as a quarterback helped Nicholas Petit-Frère a great deal with his ability to scramble out of trouble and pick up yards with his legs, limiting the overall sack column of both he and his fellow lineman. Not a consistent block finisher or mauler in either the pass or run game and developing more overall nastiness as a player would truly benefit his career at tackle. He had a rough day against Michigan's elite pass rush lead by Aidan Hutchinson and David Ojabo, both of whom are guaranteed Day 1 selection in the 2022 draft, and while they are elite prospects and it's expected that he would struggle against them it showed that he hadn't played against real competition up until that point.

Nicholas Petit-Frère is as technically sound a prospect as you'll find in the draft with exceptional athleticism and traits that the best NFL offensive lineman possess. His only real concern is his blocking angles at times, his underwhelming nastiness, and performances against elite competition, outside of that he's squeaky clean as a prospect and should be an excellent addition to a starting lineup Week 1 of his rookie year. He's a high floor offensive lineman that can be a plug-n-play stalwart tackle in his career and if he fixes his issues and adapts well to the NFL he could be a potential pro bowler at some point in his career.