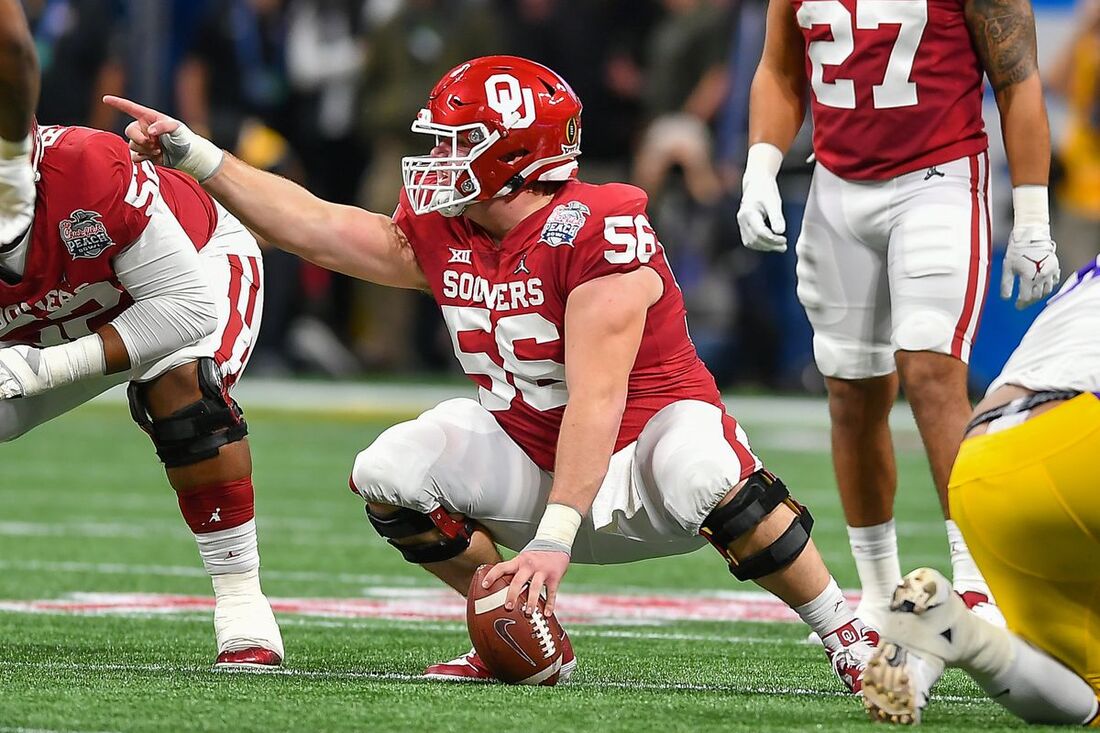 If Creed Humphrey had entered last year's draft, he would have been the first interior offensive lineman off the board and likely would have been a top 20 pick in the draft but after returning for his senior season he could be a potential top 10 pick if he turns in another season like he has for the past couple years. He's easily the best center in college football and he has the tape to back it up. He's elite level size for the center position at 6'5" and 320 lbs. with incredible athleticism and some of the best leadership skills you'll see from an offensive lineman. He's probably the strongest center in the draft with immense strength throughout his whole body and it's on full display when tasked with blocking nose guards. He is the only lineman in college football to neutralize star LSU nose guard Tyler Shelvin in 2019 and was a big reason for why Oklahoma was still competitive in that game. He possesses one of the strongest bases in college football and is a nightmare in the run game. When Oklahoma needed short yardage, they ran it right up the middle behind Humphrey as he would consistently create a hole or simply drive his man off the line. He always seems to be the low-man in the trenches and rarely finds himself getting stood up. He comes out of his stance with incredible explosion and brings the pain when initiating contact against his opposing defensive lineman. He's very good at using his opponent's momentum against them in the run game by grabbing and turning his man out of the hole and creating an open rushing lane. He rarely needs help with his man but does do a great job on combo blocks. He's very good in the second level as he's quick enough to effectively take on linebackers and safeties and takes great angles when blocking to effectively take them out quickly. He plays with anger and violence when leading the charge power runs and ISO plays and will pancake defenders when given the opportunity. In the passing game is where he truly pulls away from the pack because he's going to immediately contribute in the passing game. He has easily the highest IQ's among centers and has been the biggest reason for Oklahoma's successful passing game. He's been responsible for calling out blitzers, making adjustments at the line, directing his line when suspecting stunts and twists, and making sure his fellow lineman are on the same page. He's been a quarterback's best friend since taking the field for the Sooners and is responsible for Kyler Murray, Baker Mayfield, and Jalen Hurts success in the system considering that he did a significant portion of the work. He's easily the best pass blocking interior lineman in this draft with exceptional quickness and agility in his feet to not only mirror pass rushing defensive tackles but quickly make contact with delayed blitzers in his gap. He does an immaculate job of neutralizing stunts and twists in his gap and rarely, if ever, gets caught off guard. He has very good flexibility and balance on his hips and feet and is one of the best in college football at halting bull rushes. He has a lengthy background as a wrestler which helps him a great deal with man-handling his opponent. He knows how to get his man off balance and use angles to plant them into the ground. He's easily the best hand fighter among interior offensive lineman with his wrestling background. He doesn't allow defensive lineman to get into his pads and has enough arm length to keep their hands at bay. He possesses a great punch that's powerful and accurate. He has some of the strongest hands in college football and when they latch onto a defensive lineman's chest, the play is over. He has tremendous leadership skills from the center position as he's been the rock in what seems to be an endless flow of offensive lineman he's had to deal with and has made his fellow compatriots look better than they are.

While he's usually consistent with his balance in his blocking, he is prone to lunging and overextending to make blocks which can leave him vulnerable. Defenders with longer arms are what have given him the most trouble in his college career and especially defenders that know how to use their length. He has lost more than once to quick swim moves and stutter steps although you have to sift through a lot of film to find them.

He's easily the best center to come out of college since Ryan Kelly and among all the interior lineman in this class, he possesses one of the highest floors for success. His ceiling is also very high for a center as well and I would be shocked to see him become the apple of an owner's eye in the 1st round for a team in need of center help.