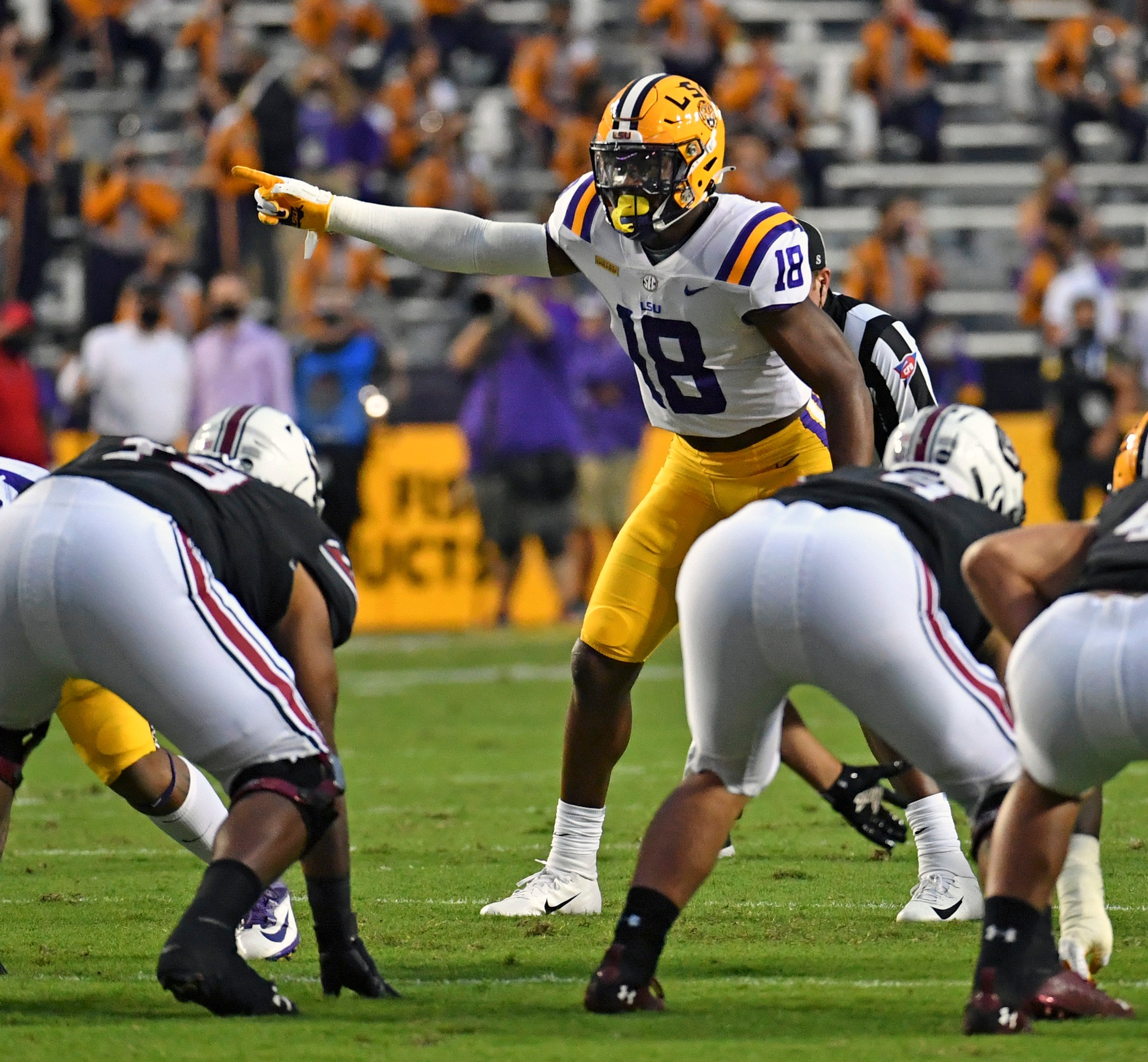 Photo by Hilary Scheinuk-The Advocate
Damone Clark was given the vaunted LSU #18 jersey in 2021 which is given to players that LSU believes represents the program on and off the field in a high character fashion and what he did on the field of LSU in 2021 certainly gives credence as to why he earned the number. At 6'2'' and 239 lbs., Damone Clark plays with excellent athleticism, football IQ and instincts. Speed is the name of the game for Damone Clark and he certainly shows that extra gear on tape to run down ball carriers at will in run defense. He's got sideline to sideline speed to make plays quickly from the other side of the field and was very good at doing so for a very poor LSU Tigers team in 2021. His muscular build and lengthy arms allow him in run defense to quickly snatch and wrap up ball carriers of all shapes and sizes and rarely has found himself getting dragged for extra yards. He's very patient and analytical in run defense as he allows the trenches to develop and not jump in hastily into the fray to make a stop and often finds himself catching the running back as he's cutting back. He's very good at weaving through the trenches in run defense when asked to blitz and often has gotten in the opponent's backfield for a loss. His excellent length for his size allows him to maintain some separation from blockers trying to get their hands on him and also allows him to stack and shed very effectively. He attacks the football when he makes tackles and had quite the uptick in forced fumbles in 2021.  He's relentless in his pursuit of ball carriers and takes excellent angles when closing in on his target. As a pass rusher, he's very explosive out of his stance at his inside linebacker position and has enough quickness and agility to make himself a tough target for offensive lineman to pin down effectively. When he gets into the backfield he's proven to be effective at chasing quarterbacks as he has enough agility and quickness to turn on a dime. In pass coverage, he plays with excellent football IQ and instincts that make throwing in his direction in coverage challenging. In man coverage, he displays enough size to match up well with tight ends in the slot and at the line of scrimmage. He does a great job of using his length to disrupt passing lanes and batting away passes. In zone coverage, he's good at recognizing passing patterns and is careful not to overstep or make false movements. He covers his area well with good explosion and has had success with timing his jumps on the football to either quickly tackle his man or disrupt the pass. His motor and competitive fire runs super hot and even on a bad LSU team that was filled with turmoil from the coaching staff and to the players he still played and performed at a tremendously high level. His receiving of the #18 jersey shows that he brings tremendous leadership qualities and should be a phenomenal addition to a teams locker room. He came up clutch in the Mississippi State game coming up with two sacks on the final two plays of the game and effectively ended the game with a win for LSU and showed his football IQ and motor as he chased down the quarterback and brought him down.

Damone Clark can be a very reactive linebacker and too often he's on the wrong end of plays that utilize deception. He can sometimes run himself out of position on bootlegs from the offense and often leaves openings for running backs to take check down throws and go for bigger yardage than they should. He's been fooled by look-offs and pump fakes on occasion and tempering his reactivity to offensive movements will need to be coached out of him. He needs a bit of a runway to reach top speed and while he certainly isn't lacking in speed it could be an issue for him when it comes chasing down NFL offensive weapons. I don't see him level players with enough physicality and having become a more physical linebacker could certainly help him in his career. He can be hesitant in his run defense when attacking the line of scrimmage and teams are going to wonder if he's willing to jump head first into the teeth of the trenches to make a play. He could benefit from working with pass rush coaches in the NFL because far too often when he gets caught by offensive lineman he can get shut down completely. He can get second guessing his decisions at times in run defense and this can cause him to either be late hitting a gap or find himself giving chase to running backs rather than tackling them at the line. While I understand that SEC teams are basically conveyor belts for talented football players and often don't get 4 years of starting reps but his only year of production came last season and while I don't think he's a one year wonder, that small window of production he had in college is somewhat worrisome.

Damone Clark was one of the few bright spots on the LSU roster in 2021 and his effort and leadership for the LSU Tigers has certainly been known by NFL teams. He's got some minor issues with his level of physicality and some parts of his game that need cleanup but his issues are very coachable and his intangibles and passion for the game far out way his faults.
He's a talented linebacker with great potential to be a quality NFL starter and if he gets drafted by a team that can coach out some of his issues, he could be a very good NFL player.