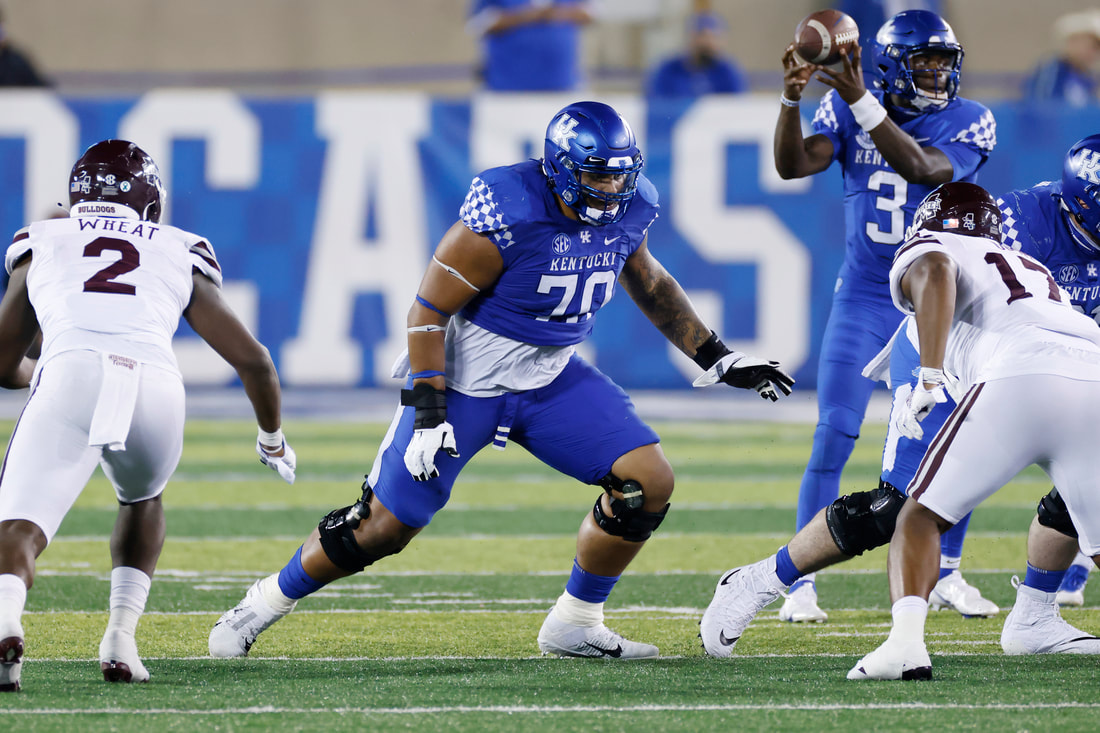 Photo by Joe Robbins-Getty Images-wildcatbluenation.com
Darian Kinnard enters this draft as one of the bigger draft sleepers as a potential Day 1 draft selection is one good combine away from shooting up draft boards. He's a massive offensive line prospect at 6'5'' and 350 lbs. with great power in his frame and great mobility. In pass protection, Kinnard displays a phenomenal anchor in his base when he's bull rushed and has yet to lose a battle on this move. He has a very powerful punch that can stall lineman at the snap and possesses adequate length in his arms to keep defenders from getting into his pads. He has great flexibility for 350 lbs. which both helps him take on bull rushes and take on contact and reestablish his base quickly. He's very nasty and aggressive offensive lineman and will get his chunk of flesh in the trenches. When he has played in pass protection at offensive tackle, he displays great quickness and agility to mirror off edge rushers. Kentucky has a power run based offense and many of their best runs came with Darian Kinnard. He's a mauler in the run game with many of his opponents more often than not being run over. He brings ridiculous power at the point of contact and often collapses the defensive line. He looks to plant defensive lineman when he smells blood in the water and will finish his opponents on a consistent basis. He has exceptional grip strength and when he locks his mitts onto an opponent's chest pads, he can be impossible to break away from. He does a great job of coming off the ball quickly when run blocking and his explosive first step can make quick work of interior lineman. He possesses excellent mobility and agility for his size and getting to blocks both on the second level of the defense and as a pulling guard. He's one of the scariest offensive lineman in the draft to see pulling on outside runs as he comes off the edge looking to run over defenders and serve up huge pancakes on defense. He hits like a semi truck when he makes contact with linebackers in the second level and often scares players enough to force them out of the lane. He's played right tackle and guard for the Kentucky Wild Cats which gives him excellent versatility for the NFL. He plays in the SEC which has some of the toughest defensive lines in college football and he has fought many battles against some of the best edge rushers and defensive lineman the NCAA has to offer. He's as tough as a tank when it comes to playing on the line and will give his team everything he has for 60 minutes of football.

His overall weight distribution in his frame needs work as he seems to carry more dead than teams like lineman to have and losing around 20+ lbs. would likely benefit his career greatly. His punch accuracy and timing is questionable at the snap as he can too often hit his opponents shoulders at the initial contact. He can play with sloppy pad level on occasion which can give defensive lineman opportunities to get into his chest and force him off balance early in his set. He can be guilty of lunging and when trying to drive defensive lineman off the line and lose his footing. He can duck his head in pass protection. He has some issues in the trenches when it comes to keeping his chest clean from defenders and will need to do a better job of hand fighting. He can overrun angles in the second level and can allow holes in the rush to open up for defenders. He played right tackle at Kentucky and  had issues with dealing with speed rushers and while he's a versatile prospect, his best path for success will be at the guard position. He has to win early in a rep for him to have success at times and facing more technically sound NFL pass rushers could lead to rough start in the NFL.

I wish Kentucky was more of a passing offense as I feel that they may have robbed Darian Kinnard of critical reps to showcase his pass protection but just watching him run over defensive lineman like a semi hitting a speed showed me enough about his ability, as just a run blocker, to warrant teams excitement over his ability as genuine and not misguided. He's one of the best run blockers in this draft with the ability to blast open holes in the defensive line very quickly and has the nastiness and power to survive in the NFL. Although he's played right tackle in college football, his style of play and skill set is much better suited to playing inside where his aggression, athleticism, and power all can flourish early. If he can showcase great potential as a pass blocker in workouts and continue to polish his technique in pass protection a team could have themselves a potential steal in the draft.