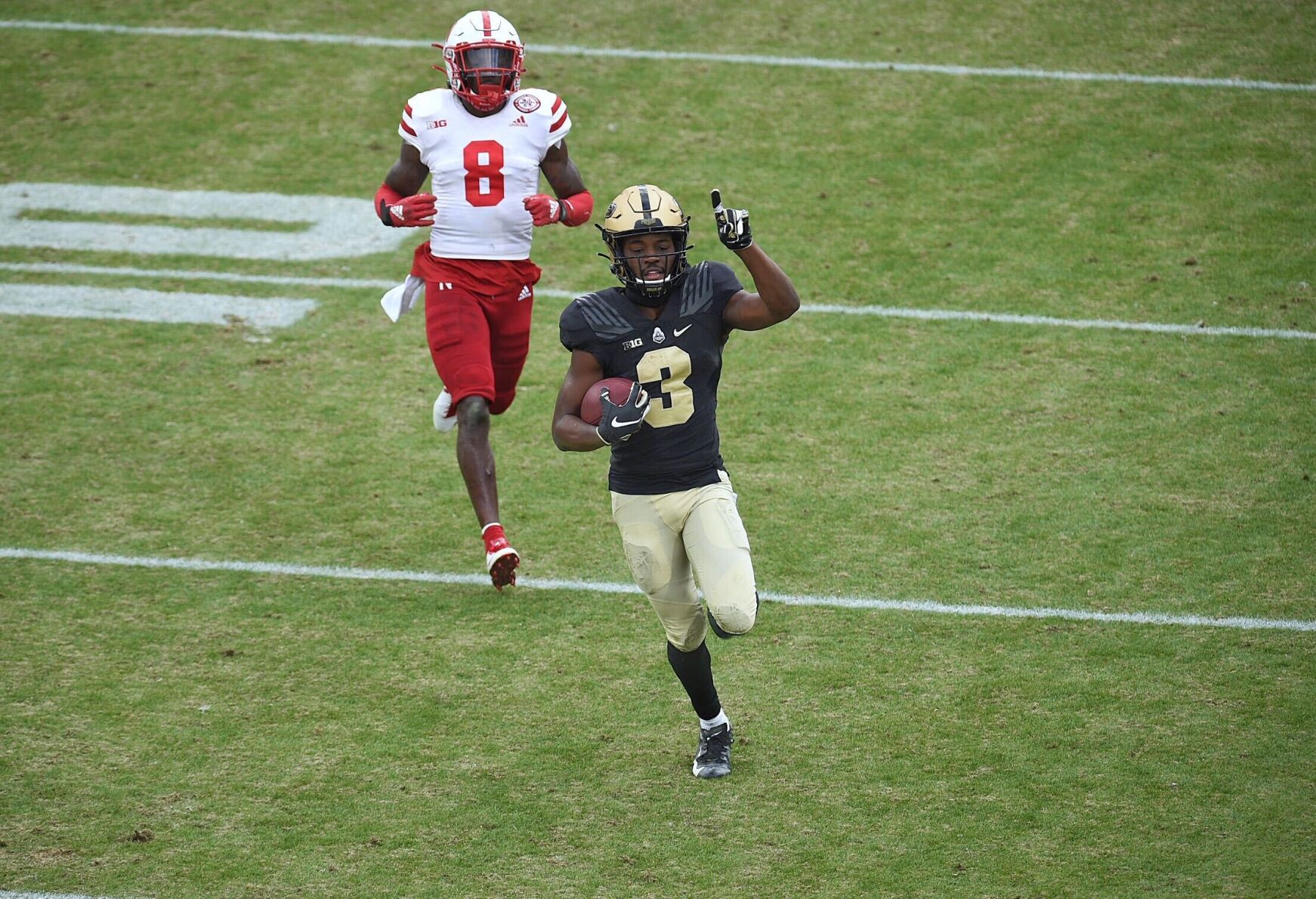 Photo by David Hickey-Purdue Exponent
The Purdue Boilermakers produced a very talented rookie receiver in 2021 in Rondale Moore for the Cardinals and now in 2022 they look to repeat their success at the position with David Bell. At 6'2" and 210 lbs., Bell brings excellent size, hands, and playmaking ability. David Bell brings the prototypical size to the position that NFL teams are looking for; he brings enough power to fight through press coverage with relative ease without getting burdened as a route-runner. As a route-runner he's crisp in his release and separation at the top of routes and has enough quickness in his feet to create windows for his quarterback. He's a nuanced route-runner who has polished his craft very well in his time at Purdue and often made him an early target for his quarterback. He possesses great arm length for his size and exceptional hands that can pluck passes out of the air and hold onto to them through heavy traffic and contact. He possesses a very good route-tree and showed at Purdue that he can get himself open without having to be schemed. His best trait is his playmaking ability when the ball is in his hands because he can make defenders miss with ease and he can break tackles with the best of him. When he jump-cuts defenders in the open field he takes their ankles with him due to his excellent timing when he makes moves to ensure his tackler can't double back and make plays. He has a phenomenal spin move in the open field that can break tackles as well as evade and he seems to have a "Spidey Sense" for incoming tacklers once he possesses the football and has spun away from a lot of human missiles on defense. He's a tough receiver to bring down by yourself as he possesses surprising power in his frame to fight through contact and carry defenders for extra yardage. He's very good on contested throws, which he has seen a lot of in college, where his size and physicality allow him to get into a position to catch and come down with the pass. He's very good as a possession receiver with his propensity to find the line to gain, create separation, and pick up the necessary yards to keep a drive going. He has phenomenal contact balance when he's hit which allows him to keep his feet and fight for an extra yard or two. He has great boundary awareness on the sideline and did a nice job of keeping his feet in bounds, especially on 3rd down situations, which shows his high football IQ. He's had his best games against his toughest opponents, Michigan State, Iowa, Ohio State, and Minnesota which shows not only that he comes prepared every week but he puts in the work off the field for his toughest challenges but he delivers when the lights are brightest. He's a tough competitor with his willingness to go over the middle and make plays in dangerous waters and his effort in doing so helped Purdue reach a bowl game this year.

He's a slightly above average athlete and while he proved at Purdue to be athletic enough to burn college defenders deep on occasion and be tough to catch up to when he has green grass in front of him, NFL defenders aren't going to be as easy to evade. He's not very twitchy or agile as a route-runner and cutting at the top of his routes to get separation has been an issue for him against more athletic corners. His average at best agility can be an issue in the open field because he doesn't time his jump cuts or spins perfectly he gets tripped up and tackled easily. He's too eager to push-off corners downfield on deep balls and that's going to get flagged often in the NFL tampering down his aggressiveness at the catch point will be crucial to his production. Most of his touchdowns came in one game this season, three versus UConn, and getting into the end zone with his average athleticism was a challenge in 2021 with defenders often chasing him down before he could put points on the board. Not much of a vertical leaper on contested catches due to his lacking explosiveness and that could be an issue in the red zone where vertical athletes really take over. While played all over the Purdue offense, I think his role will likely be limited to an outside receiver position with some slot plays made up for him due to his average athleticism and size.

I think he's more of a possession receiver than he was at Purdue because NFL defenders aren't going to be as easy to evade and break away from like college defenders. His toughness, route-running, football IQ, and size make him an easy target for quarterbacks in need of 7 yards on third and 6 and although I think his ability to make people miss will translate into the NFL gradually, his immediate value to a team will be a slot and rotational receiver role early in his career. NFL players with his average athleticism have had phenomenal careers in the NFL when they master their route running skills and if he can continue to polish and sharpen his route tree, he could be a high quality receiver on an offense.