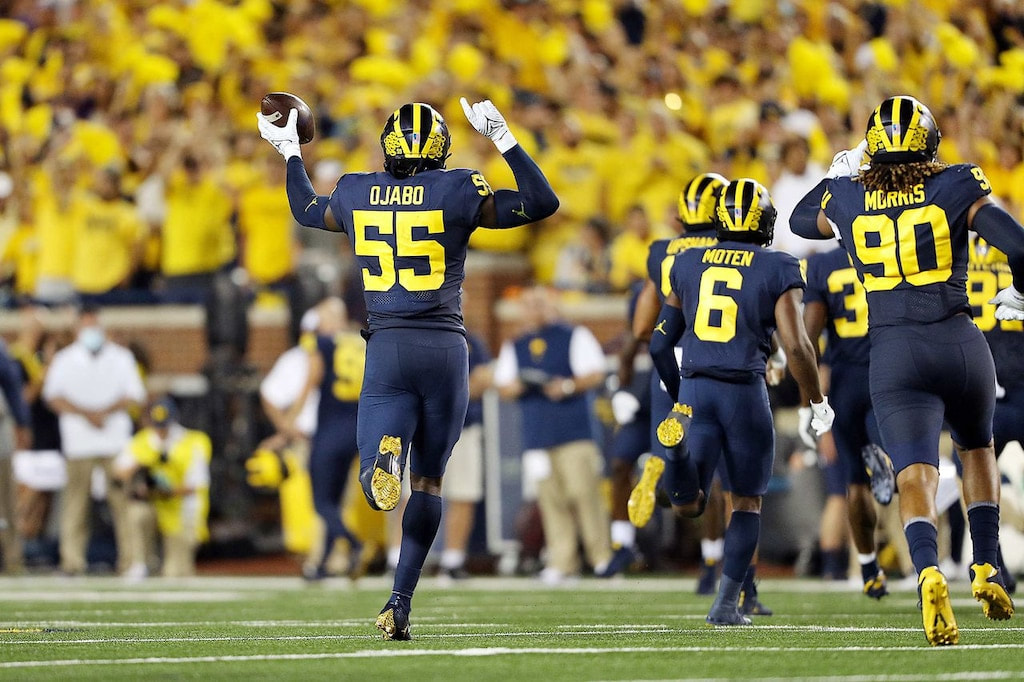 Photo by Mike Mulholland-mlive.com
While Michigan's Aidan Hutchinson has been the Wolverines MVP in 2021 after posting up one of the best defensive seasons in Michigan history since Charles Woodson, his counterpart on the other side of the line in David Ojabo certainly has earned himself considerable praise from coaches and scouts after dominating offensive tackles off the edge as well. At 6'5" and 255 lbs., Ojabo brings excellent length, size, and athleticism to the edge rusher position. He has a very impressive first step off the line with phenomenal speed to power conversion when he makes contact. He has exceptional agility for his size which allows him to land all sorts of pass rush moves on his opposing tackle. He possesses excellent power in his upper and lower body which gives him both a strong base in run defense as well as a potentially devastating bull rush. His go to move out of the gate is a quick, powerful, highly effective spin move that he has shown the ability to use both inside and outside the tackles frame and it has won many battles for him in his time at Michigan. He has a very potent and powerful push-pull move when he sinks his hands into an offensive lineman's chest pads and has shown little issues with shedding blocks. He has a very good stutter-swipe move on the outside that has proven to be highly effective at giving him the edge on the blindside. He possesses great flexibility in his frame and has shown little issues with bending the edge. He has a very powerful dip and rip move as well and allows him to run through offensive lineman rather than widen out his route to the quarterback. When his pass rush fails initially he does have the wherewithal try and bat passes at the line to keep himself in the game. In run defense,  he does a great job of holding his edge and often forces running backs to bounce outside, allowing his teammates to take advantage. He does a nice job of stacking and shedding offensive lineman on run downs and has more than enough power in his lower half to hold his ground. He possesses excellent pursuit speed when he locks onto the running back and his strong hands allow him to latch on and bring down backs very quickly. He does a nice job of wrapping up ball carriers when he makes contact and doesn't get broken off easily. What made him rocket up draft boards in the 2021 is not his phenomenal athletic ability or his exceptional intangibles but his ability to strip the football and create turnovers for his team as he clearly the distinguished himself in college football as the best edge rusher in the draft when it comes to putting the football on the turf. When passing rushing off the edge, you can clearly see that he's looking to punch or club the football out of the quarterback's hands which he did on a regular basis in 2021. He does an outstanding job of coming off the blindside with his outside arm free and trying to punch over the shoulder of the quarterback, trying to get the best angle at attacking the football in the quarterback's hands to try and take the ball away. He also does a great job of trying to punch and strip the football from running backs when he's making tackles as well. He has a knack for making game changing clutch plays on defense and has played his best when the lights are brightest at Michigan. He plays with a hot motor and relentless effort on the field which has allowed him to flourish in 2021.

He's played only one year of college football so far in his career and it shows on the field. He plays very high out of his stance and doesn't attempt to lower his pad level once he gets going. He gives up his chest too often off the line and has shown himself to struggle at getting himself free from offensive lineman when they latch on. He doesn't utilize his length as well as you would expect from a player of his caliber with a lot of those issues stemming from his poor pad level. He does have a reliable bull rush yet in his arsenal and his swim move can be hit or miss off the line. He has an inconsistent punch when it comes to accuracy and often can find himself stuck in a battle before getting an opportunity to make a play. He's underdeveloped as a hand fighter and often loses battles in the trenches because of it. He hasn't played many snaps with his hand in the dirt as he chooses to play standing up at the line and showing the ability to play in a 3-point and 4-point stance will benefit him greatly. He has benefited greatly from playing opposite Aidan Hutchinson as he demands a majority of the attention on defense, allowing David Ojabo to take advantage of having one-on-one matchups without worrying about being chipped by tight ends and running backs. He also has benefitted from playing with an excellent secondary which has given him more time to rush the quarterback and create havoc for offenses. He relies too often on his athleticism to make plays at times and while he has found success at the next level doing so, athleticism has proven to be not enough to succeed in the NFL.

David Ojabo has been easily the biggest surprise of the 2021 season with his phenomenal play opposite Aidan Hutchinson and gave Michigan the two-headed monster off the edge that has rarely been seen in college football. His athleticism, intangibles, and potential game-changing skillset will likely make him one of the most watched draft prospects in the draft. While he's admittedly raw in his technique due to his single starting season for the Wolverines, his issues can be coached out of him. He's a Day 1 draft selection, barring any background issues, and with the right coaching he can be a pro bowl edge rusher and stalwart defender for a decade.