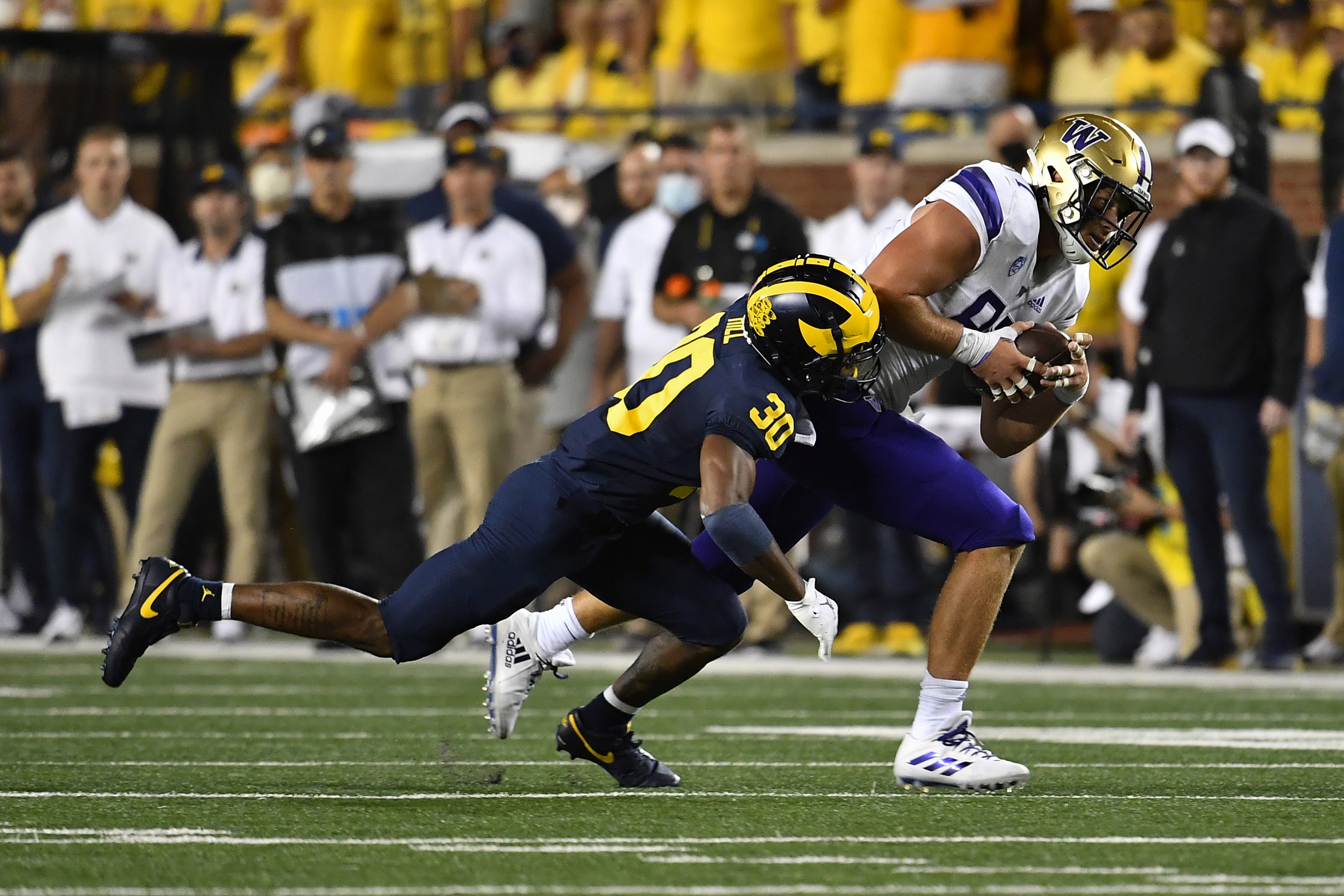 Photo Alika Jenner-Getty Images
The 2021 Michigan Wolverines had one of the best defenses in college football and Daxton Hill was certainly a big reason for their success. At 6' and 190 lbs., Hill brings ridiculous athleticism and excellent coverage skills. He has NFL bloodlines with his brother being Justice Hill, current Baltimore Ravens running back. Daxton Hill was a five star recruit coming out of high school and just by watching a couple plays of his you can see why. He's an unreal athletic specimen with his speed, agility, and explosiveness and all three are evident in his play. In zone coverage, you see a safety with astronomical range on the back with his ability not to just run after deep balls downfield with some of the fastest receivers in college football, but he can also give himself enough time to contest passes and force incompletions. He keeps his eyes locked onto the quarterback and does a great job of recognizing routes at the snap. His range and burst allow him to cover large zones and can force quarterbacks to rethink throws in his area on the fly, giving his edge rushers one second more to make a play in the back field. He takes excellent angles on throws when undercutting routes and if he doesn't come down with the interception, he's at least causing incompletions. He has been lined up at single high safety, strong safety, and free safety in zone coverage and has performed very well at all three positions. He's incredibly explosive vertically and combined with size and length it makes him a tremendous asset in coverage as he can play shallow zone if need be. Daxton Hill is one of the best man coverage safeties in this draft class and I wouldn't be shocked if teams look at him as a cornerback as well. He has an exceptionally fluid back pedal that's low to the ground, quick choppy feet to ensure he can plant his foot and burst on the football. He has phenomenal agility and explosiveness in his lower half which allows to change direction and jump routes quickly. He does a great job in man coverage of high pointing passes in the air often causing defended passes. He's very patient when giving his receiver cushion and refuses to bite on sluggos or quick hitches. He has grip hip flexibility to turn and run down field on deep balls and can go from 0-60 in a flash. He has the top end speed and acceleration to run down field with anybody in college and the pros and will be a sight to see at the combine during the 40 yard dash. He also has outstanding pursuit and make-up speed when in man coverage which shows a highly competitive player. He has great length for a defensive back prospect, good arm length and prototypical height as well. He has enough length and size to cover tight ends at the line or in the slot and enough athleticism to not be overmatched by the size and strength of bigger receivers. When asked to play press coverage, he demonstrates excellent power in his frame when jamming receivers at the line and does a nice job of running towards the boundary as well as making them work hard to run shallow inside routes. Michigan used Daxton Hill all over the secondary in 2021 with significant snaps at outside corner, slot corner, strong safety, free safety, and even single high safety on blitz packages, making him one of the most versatile defensive back prospects in the draft. Although Michigan rarely used him as a blitzer due to their relentless pass rush, when Daxton Hill got his chances to attack the backfield you see his elite athletic ability truly shine as he can get blitz through the line, weave through traffic, and make contact with the ball carrier in the backfield faster than any prospect in this draft. He will be a dangerous blitzer in the NFL if used correctly and sparingly all else fails. He's a good tackler that does a nice job of wrapping and bringing down ball carriers. He attacks low when making contact and does a nice job of tying up the legs. He made his bones on special teams at Michigan playing as a gunner and was very good at forcing fair catches his freshman year. He has great ball skills mainly from his ability to accurately time jump cuts on routes and high point footballs in the air. His versatility and coverage prowess with only two starting seasons under his belt show a player with high football IQ and an excellent work ethic.

The Michigan Wolverines in 2021 possessed the best pass rush in college football with Aidan Hutchinson, a potential Top 5 pick, and David Ojabo, a potential Top 25 pick, rushing off the edge and at times looked unblockable which gave quarterbacks much less time to throw which in turn gave Daxton Hill much more opportunities to make plays on bad passes. He's lighter than most teams would want a safety to be at 190 lbs. and adding more bulk to his frame would serve him well in the NFL. He doesn't try to attack the football enough when making tackles and must become more consistent at stripping the football. He doesn't try to tackle ball carriers head on enough, especially when they have a size advantage, and becoming more confident in his ability to bring them down heads up will help him in his NFL career. His hands are inconsistent when coming down with interceptions and unless he can make clean picks, he may struggle in the NFL at making the acrobatic catches. He can occasionally give receivers too much cushion in man coverage which can leave him vulnerable to underneath routes and force him to tackle quickly.

The last time I saw a player with this level of ability in coverage was Jalen Ramsey coming out of Florida State and while he was a bigger, stronger, and more aggressive player coming into the 2016 NFL Draft, Daxton Hill has coverage skills close to Ramsey's coming into the 2021 NFL draft. Daxton Hill has a very high floor and ceiling for a prospect and should be looked at as both a cornerback and safety coming into the draft. If he can polish his tackling and work on catching the football, Hill will be a special talent in the NFL and could be a potential pro bowl player early in his career.