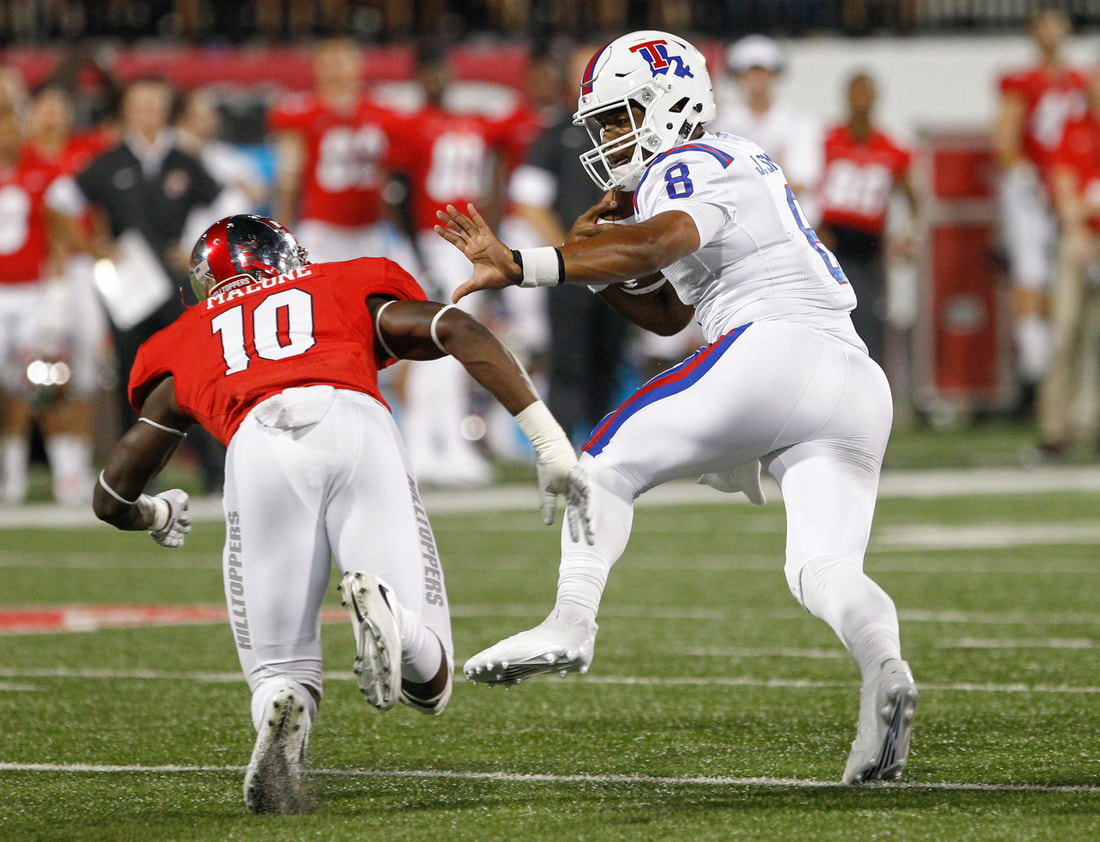 Photo by Michael Hickey-Getty Images
DeAngelo Malone has been a monster off the edge for Western Kentucky in his 5 seasons for the program and he's slowly but surely climbing up draft boards of NFL teams in need of an edge rusher. At 6'4'' and 240 lbs., Malone brings exceptional athleticism, rare flexibility, and tenacious style of play. As a pass rusher, very few in the draft can bend edge with the smoothness and fluidity that he can and it's a big reason for his rise up boards. He comes off the line with great explosiveness that can catch slow offensive lineman off guard. He's extremely quick and agile for his size and his dashing and stuttering early in his rep helps him create potential openings for him to squeeze through. He plays low to the ground when attacking the line of scrimmage and never finds himself losing the leverage game against offensive tackles. He can duck his shoulder and slide underneath tackles with some of the best in the draft and his ability to do so with such effectiveness is enticing to defensive coaches with complex defensive schemes that need chess pieces on defense. He has very good arm length for his size and can create distance between him and offensive tackles with some effectiveness. He has an explosive inside cut move on the edge when tackles expect him to bend and has effectively sacked quarterbacks with this maneuver. He has a good punch when he makes contact with offensive lineman and can jolt them enough to create separation for him to make a play. Contact balance when he's punched and knocked sideways is great and rarely finds himself back in the grass in games. When he can successfully bend the edge against offensive lineman he's good at cutting around at right angles to make a sack and when he attempts a sack, he's very good at trying to club the throwing arm to cause a football. In run defense, he proved to be very good at shooting gaps into the backfield to create early issues for the offense and he's also proven to be exceptional at punching and stripping out the football in the run game. He's scrappy in run defense and does play bigger than his size suggests. He will fight, scratch, and claw to get free from offensive lineman when he has a hold of his pads and sometimes he's proven to be too much of a fight for lineman to contain effectively. When he can get into the backfield opposite of the play's direction, he possesses enough pursuit speed to quickly run down ball carriers and tackle them for loss. He's a tough and competitive edge rusher that has shown slow but steady development in his career at his position and you be sure that he'll do everything on the field when the game is over.

He relies too much on his athletic ability to get into the backfield and when faced against offensive tackles that aren't overwhelmed by his ability, he's usually in for a tough outing. He lacks the desired mass in his lower half to plant his feet in run defense and hold his ground in the run game and may only be suited to play standup linebacker in a 3-4 scheme because of this. His weight is my biggest concern with him being at most 240 lbs. and any team that drafts him is going to want his playing weight at least in the 250's. He struggles to shed blocks from offensive tackles, especially if they have a good grip on him and will find himself struggling against NFL pros. Not enough leg drive to collapse the edge as an edge defender and may be relegated to simply a schemed gap shooter in the NFL. He can get ragdolled if he leaves his chest exposed and his lack of power and size in his frame doesn't help either. Not a lot of rush moves in his arsenal outside of him bending the edge and learning some pass rush moves and developing a pre-snap plan will benefit him in the long run. Too many finesse moves in his game with very little power used in his rush and developing more in his game is a must for career longevity. His tackling ability is highly questionable as a whole as he can take bad angles when in pursuit as well as struggle to wrap up and bring down ball carriers, although some of the blame can go to him wanting to strip or punch out the football. I worry about him heading to the NFL and facing the learning curve that is professional football after playing for the Hilltoppers in the very weak CUSA conference. I rarely saw him go into coverage in college and I don't think he has much of a ceiling playing linebacker in 4-3 as some have suggested he can do. Not a versatile prospect with very few reps with his hand in the dirt or plays that see him drop back and cover likely will be situational pass rusher exclusively.

He's a very poor man's version of Von Miller coming out of college and teams with a crafty defensive coach that wants a pass rusher that can move on around the front seven and attack mismatches may have him higher on their boards than most. He offers a great deal of physical traits in his game that can make him a productive pass rusher in the NFL similar to a Hasson Reddick but he'll need to develop his pass rush technique quite a bit before he can even see the above mentioned players. He'll be highly reliant on scheme and coaching to realize his potential to be a productive defensive player.