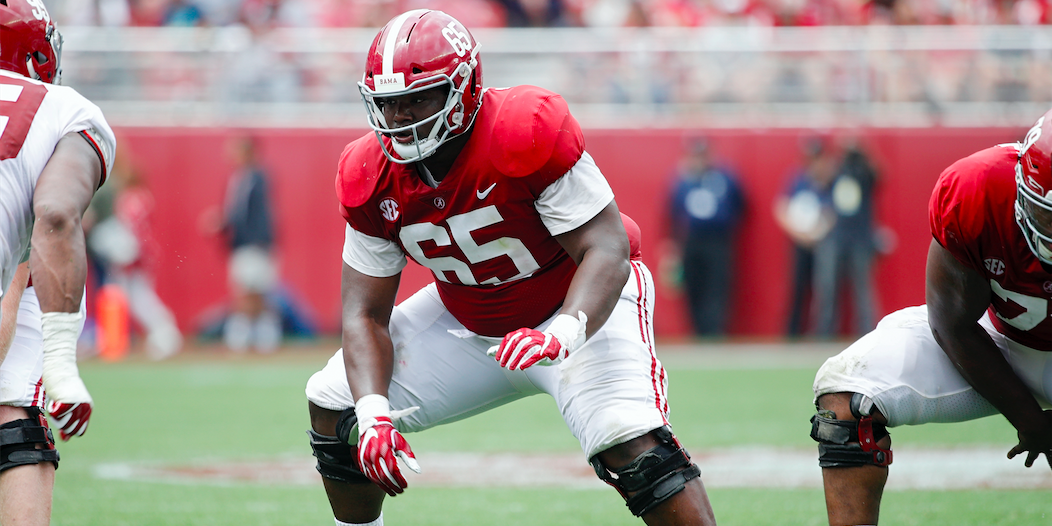 Deonte Brown is everything an Alabama Crimson Tide interior lineman is supposed to be; big, nasty, athletic, and tough. Deonte Brown is a huge guard at 6'4" and 340 lbs. with tremendous power and strong hands. He's a force when he comes off the ball and usually is walking his guy backwards about 5 yards before he can reestablish his base. He's very good at turning defensive lineman out of the play and opening up a hole for a running back to burst through. He's a mauler and a finisher in the run game and is no stranger to trampling his defender and landing on top of them. He took on 2020's 7th overall draft pick Derrick Brown when they played Auburn and he held his own through the hole game. He's got some impressive power in his punch that's going to be very effective in the NFL. He's one of the most devastating pulling guards in the draft with his size and athletic ability when coming around the corner and anybody that gets in his way is going to get hurt. He's very good once he reaches the second level as he has enough athletic ability to make blocks and create lanes against linebackers and safeties. He's got very good pad level when driving guys off the line of scrimmage and is a great to run power run plays through on short yardage plays. In pass protection, he displays great power in his base which helps him swallow bull rushes, a skill he probably does better than most in college football, and he knows how to properly set double teams against pass rushing tackles. He has ample foot quickness and good footwork which allows him to effectively mirror pass rushing defensive lineman and keep them countering out punches. He doesn't fall for twists and stunts very often and does a good job of negating them when the happen.

His arms are shorter than most would like for an offensive lineman and they are a real problem for him when he faces defensive lineman that can out reach him. He too often goes for the kill shot as a blocker and will look to plant his man rather than trying to effectively neutralize him. Flexibility is a huge issue for him and he sometimes can find himself going backwards if a guy gets underneath his pads. Consistency from game to game can be an issue as he can sometimes play up to his opponents as well as play down to them.

​He's a massive offensive lineman that's going to be an effective run blocker early in his career and will likely develop further in pass protection as he acclimates to the NFL. He's a quality player with lots of potential and if put on the right team he could be an absolute steal.