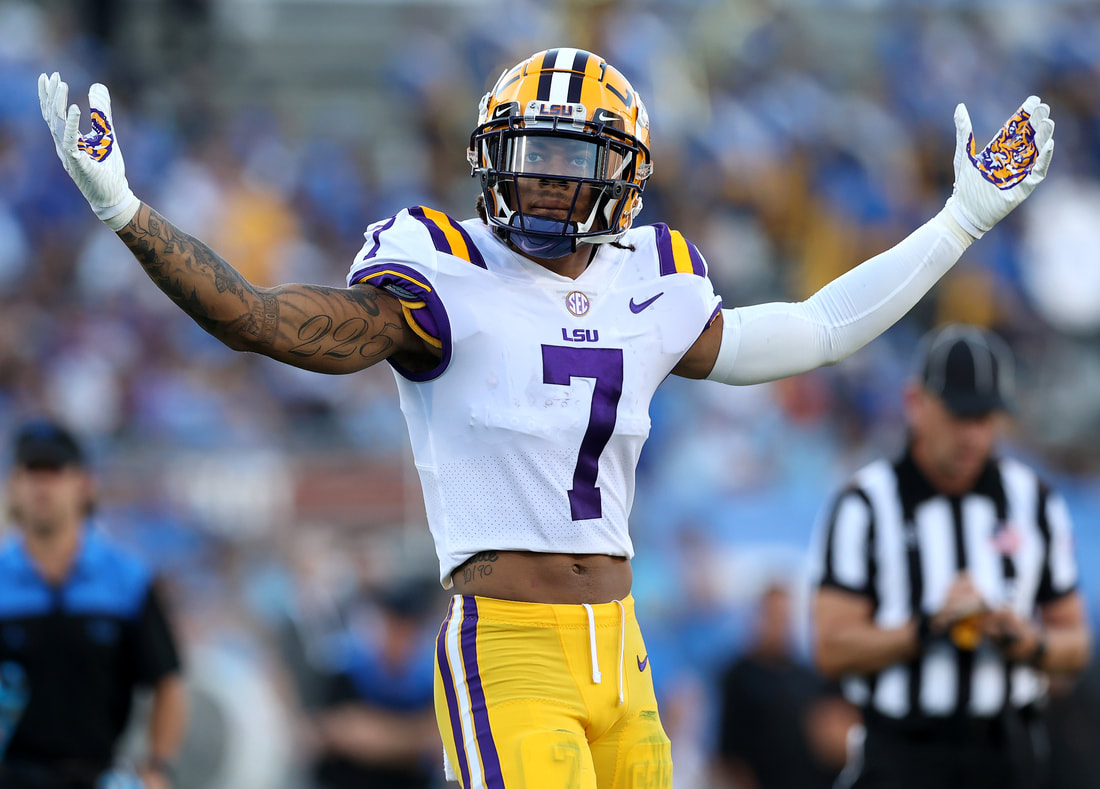 (Photo by Jonathan Bachman/Getty Images)
In a draft class that features exceptional talent at the cornerback position, Derek Stingley Jr. still stands head and shoulders above everyone else in this draft. Derek Stingley Jr brings prototypical size at 6'1" and 195 lbs. with elite level athleticism and rare competitive intensity. For a player that came into college as a five star recruit with a monstrous hype train out of high school, he still managed to exceed expectations of his coaches and struck fear into the hearts of college quarterbacks and offensive coordinators after his phenomenal freshman season that saw him snag 6 interceptions and become the premier cornerback in college football as well as being a key cog in an LSU championship title. Stingley Jr. is a 3rd generation football player whose father played in the Arena football league and grandfather, Darryl Stingley, played for the New England Patriots which shows tremendous bloodlines which more often than not translates to NFL success. Stingley Jr. is a supreme level athlete at outside cornerback who has the speed and agility to match up on electric deep threat receivers and shutdown deep passes. Being around the sport his entire life has given him phenomenal football IQ and it shows on the field with his ability to quickly diagnose routes, adjust his game on the fly, and always being around the ball on defense which is a skillset that separates the good players from the best. He possesses exceptional quickness and explosion in his lower half which allows him to change direction and adjust to routes and throws with ease. He's at his best playing man coverage on the outside where his intangibles make him a nightmare for a team's best receiver. While he has rarely been asked to play zone coverage he has shown the ability to play and thrive in zone which makes him a great fit for all 32 NFL teams in the draft. He possesses surprising strength in his frame which allows him to lock up receivers early at the line and prevent early separation. His back pedal and footwork is phenomenal and it shows that he takes pride in perfecting his craft. He does exceptional work when in press coverage and has proven to be a handful for receivers that thrive off of their size. He doesn't cause penalties and rarely finds himself grabbing onto his man downfield since he rarely has. He's a phenomenal run defender at the cornerback position who is not only not afraid to tackle bigger backs and tight ends heads up, but he can bring the pain to ball carriers and smack them backwards. He's always looking to cause turnovers when making tackles which further goes to show that he's a defensive playmaker. He plays cornerback like a star basketball player and has that "Mamba Mentality" made famous by the Late-Great Kobe Bryant, and it shows up on the field when he takes on the best receivers in college football and shuts them down. He possesses elite level ball skills and is always a danger to come down with the ball even against the best offensive players in college football. He returned punts for LSU and was a very good return man for them which goes to show his level of ability when the ball is in his hands. He has exceptional hands for cornerback and doesn't drop passes that he can catch. He fights and claws for the ball like an NBA center snagging a rebound and more often than not comes away with a pick or a defended pass. He plays in the SEC which is widely regarded as the best conference in college football which has seen immense talent emerge at the receiver position throughout the conference. Stingley Jr. has practiced against exceptionally talented offensive players at LSU such as with most of them going in the 1st round of the respective drafts and finding success in the pros which goes to show that Stingley Jr. has played and feasted on tremendous NFL talent in college.

While he was a turnover machine in his freshman year, he has done much in the turnover column since then which isn't entirely his fault considering his surrounding defense got worse, and offenses have pretty much avoided the last two years due to his astronomical ability. He can play in the slot but rarely has been able to, which hinders teams views of his versatility. He's not a cornerback that should be asked to play safety as he's primarily an outside man coverage cornerback. He can get a little handsy at times against the bigger receivers mainly due to his competitive nature rather than lack of technique. He suffered a nagging foot injury in 2021 and while it is no cause for concern when projecting his NFL career, it should at least be monitored by teams throughout the draft process.

He's a guaranteed perennial All-Pro in his career and should be a massive favorite for rookie of the year in the 2022 NFL season. There's at least a few players that are can't miss players and he certainly is one of them and I don't see him falling out of the Top 3 in the draft. He's got everything a team could want in a prospect and if he plays to his level of talent, I wouldn't be shocked to see him wearing a gold jacket after his career.