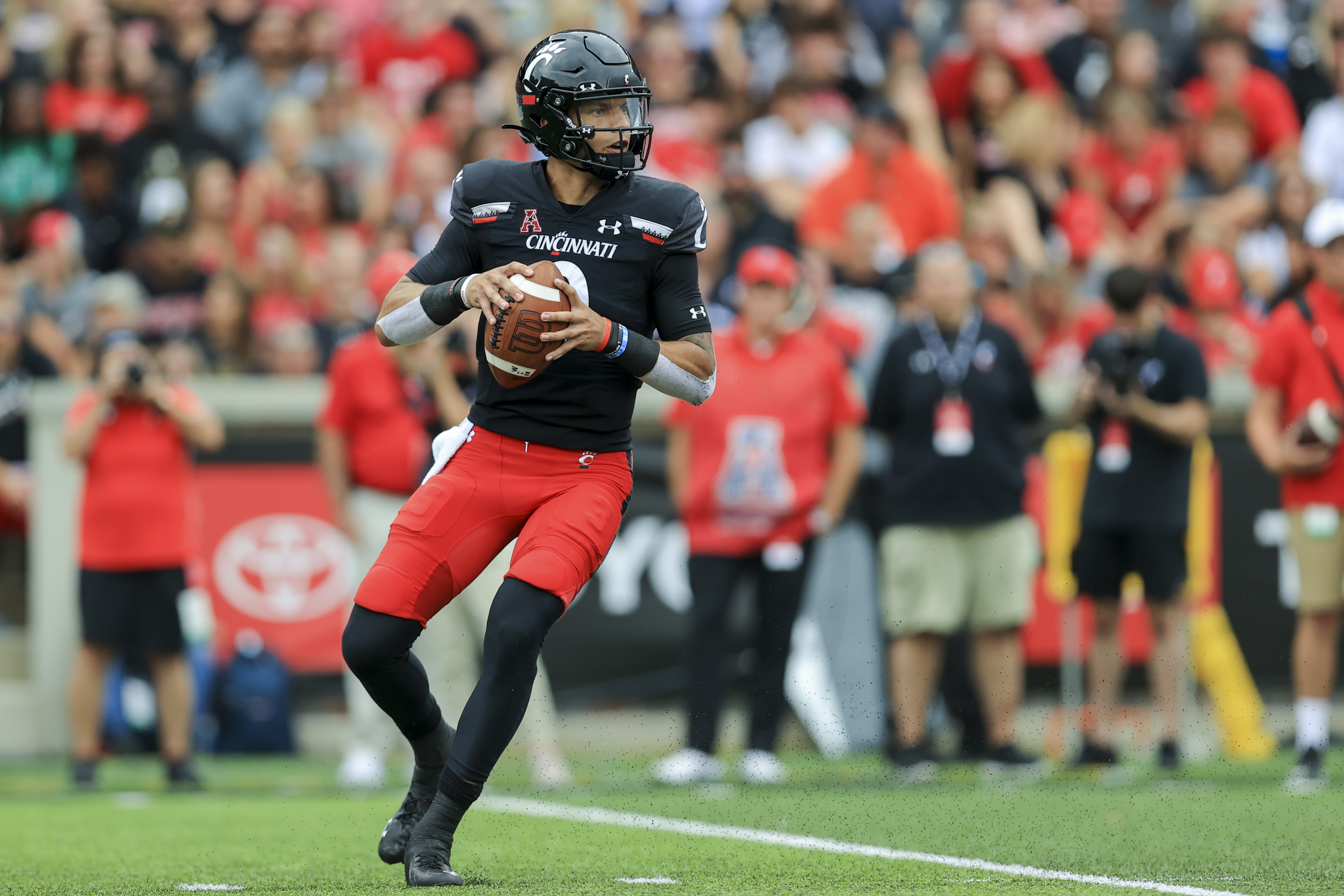 Photo by Aaron Doster-USA Today Sports
The Cincinnati Bearcats were easily the biggest surprise of the college football season by going undefeated against good teams during their season and even making the college football playoffs and while every expected them to eventual lose to the more talented Alabama, they still managed to make a game out it and brings one of the best season in Cincinnati Bearcats recent history to close. At 6'4" and 215 lbs., Ridder brings excellent height, athleticism, and arm talent. Desmond Ridder brings a tall and athletic frame that has the potential for more bulk and power to be added to it. Ridder is a very good athlete that can and has taken read-option runs for big gains in college football. He can turn on the jets if need be and run down field for yardage and if the defense is behind him on his runs they usually stay there. As a pocket passer, Ridder has good mobility in the pocket and can maneuver within it without getting an urge to escape and take off. He does a nice job of reading his first couple keys before improvising and when he does improvise it's usually as a last resort. When scrambles he's very capable of breaking tackles and occasionally putting the moves on defenders and often forces the opposing defense to use a spy on him for fear of his legs. As an arm talent, he's probably got one of two arms in the draft because the ball comes out of his hand like a laser and can get down field very quickly if need be. He can hit all three levels of the field with ease and an NFL offensive coordinator or quarterbacks coach is going to love trying to work with his cannon arm. He has nice touch on his throws and rarely finds himself rocketing passes on short routes which shows good control over his strength. He's a four-year starting college quarterback who's been a remarkable leader for this football team since he stepped on the practice and his leadership skills are outstanding. He's highly mature for a prospect which is what NFL franchises seek more than anything in quarterback and he's also a loving father whose background and upbringing suggest a player that maximizes his opportunities. Ridder's Bearcats went up against Notre Dame and beat them soundly which led to their undefeated streak and Ridder did remarkable job in 2021 of limiting his turnovers and letting the team with him rather trying to win it for them.

Desmond Ridder is a skinny quarterback that needs to add at least 15+ lbs. to his frame by the time the NFL season starts up. He had a very talented roster to say the least and it would be fair to say that he benefited from their ability to create plays as they did from when it came to his steady presence in the pocket. Decision making has been and still is an issue for him because the turnovers don't make that claim of bad decision throws, he certainly put his team in jeopardy on many occasions this year. His accuracy is inconsistent to say the least and needs receivers to be schemed open rather than thrown open. He survived off of a highly potent run game at Cincinnati that allowed him to run bootlegs and keep his opposing defense honest when playing. More of a straight line speed athlete rather than a mobile quarterback and I would be worried as a coach if I saw him in the open field trying to take on defenders. There is a Brett Favre complex in him in that he thinks he can make every throw and tempering that desire to try and make plays on every play will be key to his NFL development. He's not your classic quarterback that reads through progressions and throws the football to the open man. Not a quarterback I would trust making many throws the run and can struggle to throw accurate passes when he rolls out in play action. His mechanics need work as he can make some throws flat footed and his mechanics are also a big reason for his accuracy issues. He benefited a great deal from his bigger bodied receiver Alec Pierce and his excellent tight in Josh Whyle both of whom are highly successful at jump balls and contested catches which are often the case for them when Ridder is throwing passes in their direction The Cincinnati Bearcats defense was elite in 2021 and often the field given to Ridder was near the 50 than in their own 20 yard line and when you have a run-based offense like Cincinnati did, it's hard to lose in that scenario.

Desmond is much more of a project than a finished product just based on his film and the way the Bearcats utilized him by incorporating him in both the run and pass game as a dual threat quarterback and while dual threats have been a risky business in the NFL, they can be very high reward if they hit in the NFL, just ask the Ravens. Ridder needs heavy coaching and he may need a RPO and play action scheme to find productivity in his career. If a team throws him into the fire and expects him to not get burned they will end up with Daniel Jones but worse as their quarterback because he's not ready yet to play in a pro-style offense. He's a boom or bust quarterback prospect and if put in the right situation and with the right coach, he could be a very exciting quarterback.