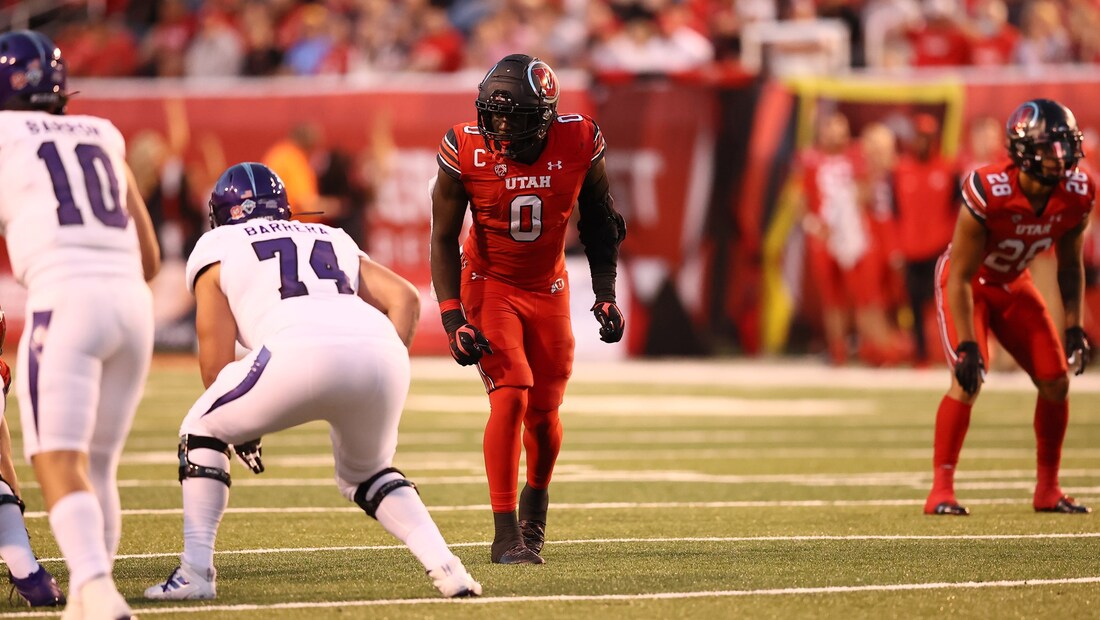 Photo by Bryan Byerly-Utah Athletics
The most influx position group heading into the 2022 NFL draft linebacker with no clear front runner among the group but after Devin Lloyd's ridiculous season which saw him take control of the defense and absolutely wreck PAC-12 offenses all year. At 6'3" and 235 lbs., Lloyd brings excellent athleticism and extremely high football IQ. He has great length for his and a very rocked up and muscular build that has room for more. He possesses legit sideline-to-sideline speed and his acceleration from a stand still position when he locks onto running backs is ridiculous. He has on countless occasions run down quarterbacks and running backs in the backfield like a Cheetah catching an antelope and he makes it look easy. As a blitzer, Lloyd brings rare pass rush ability to the linebacker position with his length and burst and he should at Utah that he has some edge rusher in him. He has a good punch for a linebacker that brings sufficient power behind it and has enough upper body strength to shed blocks. He has more than enough quickness and agility in his feet to stutter and burst through gaps in the line and does a great job of beating running backs and tight ends trying to chip him. He has great swim moves for a linebacker that's quick and has good power behind it and it's made even more effective by his ability to maintain his speed when making contact with offensive lineman. He has great flexibility and fluidity in his frame to squeeze through gaps to make plays in the backfield as well as phenomenal tackling ability. He was a highly productive blitzer in college despite not living on the defensive line like some other linebackers in this draft and his ability to get into the backfield quickly allowed him to change games like no other linebacker in college football. When he doesn't get home when he blitzes, he's very good at getting his hands up in the air and swatting passes, something he did very well in 2021. In run defense he has yet to find a running back that can beat around the edge and when he wraps up ball carriers, they go down on the stop. He's a big hitter when he has a shot on them and shows zero fear when he's about to make contact. He has incredibly strong hands for a linebacker and when he clamps down on ball carriers he doesn't let go. He takes phenomenal angles when making tackles and his pursuit speed also helps him cut running backs off if they have a step on him. He's very good at diagnosing offensive line movements in run defense and is one of the best in college football at weaving through traffic and making tackles in the run lane. He flows with the offensive line very well in run defense and is very good at avoiding pulling guards and tackles and making plays behind them. He's an excellent open field tackler and never seems to fall for becoming misdirected by jukes or spins. He's a heads-up tackler that has stood up to some of the toughest running backs in college. He tries to rip and punch at the football on a consistent basis which should help him in the NFL when it comes to making game-changing plays. He's excellent in both man and zone coverage. He has good range for a linebacker and understands how to diagnose routes and route concepts from his time playing receiver in high school. He's more than athletic enough to cover slot receivers enough in zone to scare off quarterbacks and does a nice job shrinking their passing windows and he has sufficient size to cover tight ends in man coverage, either at the line or in the slot. He has very good hands and ball skills for a linebacker and has made two house calls in his college career. He's crazy competitive, a high effort player, a relentless worker, and model citizen on and off the field and should find himself impressing coaches in interviews as well as in workouts. He was a team captain his last two years at Utah and showed himself to be the unquestioned leader of a very productive and stout defense.

Devin Lloyd is one of rare players that's faster than he is quick and while I don't think it's due to any lack of agility I think it might be that he doesn't want to play out position at times and it forces him to make minimal movements when diagnosing plays, especially when reading run plays and trying to weave through traffic to tackle the back in the hole. He has the tendency to bite on read-options and misdirection plays occasionally but cleaned that up more as the season went on in 2021. He can be too enticed to go for the big hit at times in run defense rather than wrap and bring down ball carriers and can take less than ideal angles on tackles as well that can give ball carriers a chance to break away or power for more yards.

Outside of a few blemishes in his play, Devin Lloyd is easily the most complete linebacker in the NFL draft and it's not very close in my opinion. He was an absolute game-wrecker for the Utes in 2021 and even when offenses had to account for him on the field he couldn't be stopped. I would say that Devin Lloyd is the biggest reason for the Utah Utes bowl eligibility as well as PAC-12 South Champions and NFL scouts and coaches will be chomping at the bit on draft day to add him to their defense. He's a high floor NFL prospect that will be a fixture on an NFL defense for over a decade and I expect him to become a perennial Pro Bowler in his career.