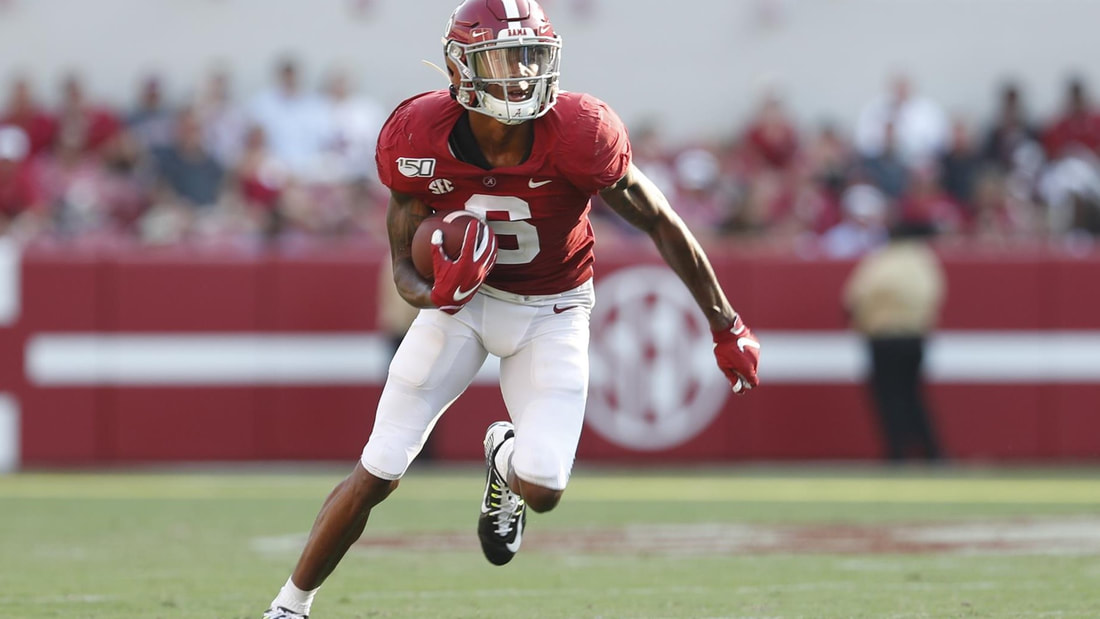 Alabama's Devonta Smith really burst onto the scene last year with his electrifying play and earned himself a potential early selection in the 2021 NFL draft. He's the first receiver since 1991 to win the Heisman Trophy and was instrumental in Alabama's 2020 College football championship run. He's a lean and muscular receiver at 6'1" and 175 lbs. with long arms for his size and electric athleticism. He's got elite level quickness and agility and it is extremely tough for any defender to handle in college football. He's a lot stronger than he looks and it's on display when he breaks low tackles by rip-ping through arms and powering through. He's a very good route-runner with plenty of branches on his rote tree and one of the best receivers in college football at creating separation from his man. He's psycho competitive as a receiver who will lock in on his opposing cornerback and look to dominate them all game. He's very explosive and doesn't need much room to hit top gear and can turn a football field into an unfair track meet very quickly. He's got exceptional speed to be a deep threat in the NFL and his elusiveness after the catch has gotten him a litany of fired Alabama fans riding his hype train. Elite level hands allow him to bring difficult passes and his good catch radius makes him an easy target. Easily one of the best vertical jumpers in the draft and is going to be a phenom in jump ball catches. His run after catch ability is among the best in the draft with more than a few highlights of him taking  the short dump off pass to the house. Always makes the first guy miss after the catch and always works to get up field. He can light up defense if they don't account for which is where his killer instinct as a receiver comes to fruition, just ask Ole Miss.

His overall size scares me if I am a team looking to draft him in Day and have be my #1 because 6'1" and 175 lbs. is a dangerous weight for a receiver to play in the NFL with a new level of defenders looking to hit him. He struggles mightily in press coverage due to his lack of size and is prone to getting thrashed around the field. He had last year's 5th overall pick in Tua Tagovailoa throwing him the football which gave him catchable passes on every throw and Mac Jones had a great 2020 as well throwing accurate passes. He played with 10th overall draft pick Henry Ruggs, 15th overall draft pick Jerry Jeudy, potential 1st round pick in this years draft Jaylen Waddle, and the #2 running back currently in the draft Najee Harris which goes to show that he has on many occasions fed off of the weak link of the defenses chain and was allowed to destroy a teams likely #3 cornerback or worse which means his overall stats might be inflated. He doesn't do a good enough job of avoiding contact and he doesn't incorporate enough juke or spin moves to his game, solely relying on his athletic ability and underrated strength in his frame to make things happen.

Devonta Smith was magical in 2020, showing elite level speed, route-running and RAC instincts that few can match and it wouldn't shock me at all to see him be the first receiver taken in the draft. His skillset, athleticism, and competitive fire make him such an exciting prospect in this draft. If he can gain some weight in his frame to protect his longevity in the pros because his current size could lead to problems. He's going to find himself taken very high in the draft likely to do recency bias but it would be well deserved.