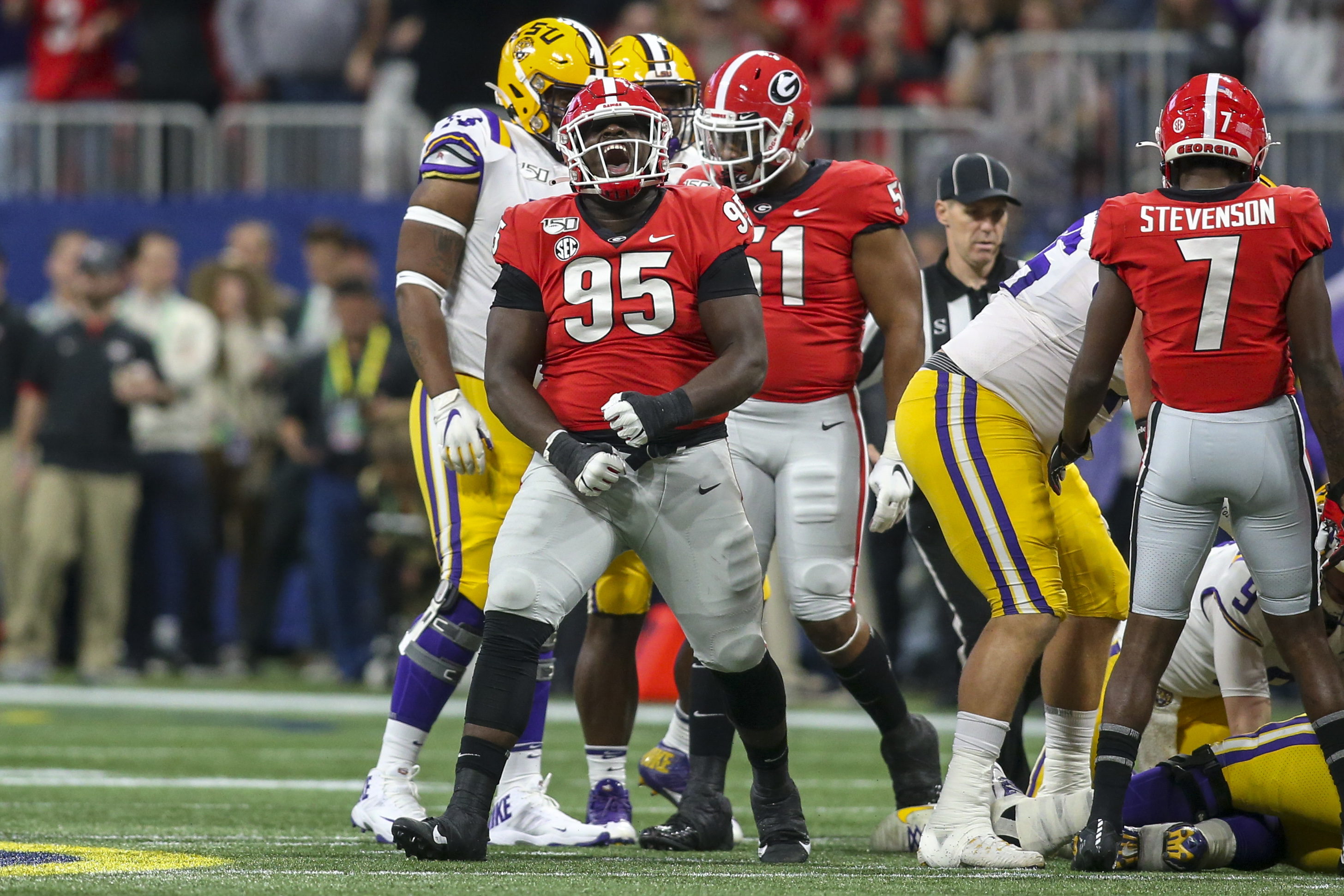 Photo by Brett Davis-USA Today Sports
Georgia Bulldog defensive tackle Jordan Davis rightly gets a large amount of credit for the dominance in the interior of the defensive line but Devonte Wyatt turned a great defensive front into the Great Red Wall of Athens that was impenetrable in run defense and nightmare for offenses when Georgia blitzed. At 6'3" and 315 lbs., Devonte Wyatt brings an elite blend of size, strength, and athleticism combined with ridiculous toughness and nastiness in the trenches. Devonte Wyatt's first step off the line is ridiculous and it's where a majority of his effectiveness comes from as a defensive lineman. He can overwhelm offensive lineman with his immense explosion out of his stance very early in a play and has ended many plays in the backfield before running backs can make a move. He comes out of his stance with exceptional pad level allowing him to establish the better leverage very early when he makes contact. He's a thick and powerful defensive lineman and when he gets into an offensive lineman's pads he can overwhelm them very quickly. He possesses exceptional speed and agility for defensive lineman and getting up field or chasing ball carriers down the line is not an issue for him. He has a good punch off the line that can be quite effective if he hits his mark and he can hold his ground very well once he locks his hands into an offensive lineman.  As a pass rusher, Wyatt gets excellent penetration in the pocket that can often force the quarterback out early where his linebackers can finish the job. He possesses a good array of pass rush moves such as a swim move, push-pull move, and his favorite by far the stack and shed maneuver. He's very good at being very mobile when passing rushing up field both ensuring that opposing offensive lineman can't get a good grip on him, often resulting in holding calls, as well keeping the quarterback guessing as to where he's going to scramble outside the pocket. You won't see tremendous production from the sack column but he got ridiculous pressure at times for his defense with his ability to run through offensive lineman like the Kool Aid man through a wall and it often forced quarterbacks to divert their course of action before a play could develop. He's active with his hands when he can't get by to the quarterback and has had success attacking passing lanes. In run defense is where his true skills come out because unlike other defensive lines in college football Georgia's lineman were tasked with stopping the run before the pass which is how they became dominant. Wyatt's ability to shed blocks when engaged with the offensive line is exceptional and often had to do so with his fellow lineman in Jordan Davis clogging holes. Wyatt is as nasty an interior lineman as you'll find in this draft as every swipe, punch, hit, and block shedding maneuver is done with immense power and maliciousness which allowed him to overwhelm offensive lineman as the game went on and take over towards the end. He takes phenomenal angles when chasing to make tackles and with his elite athletic ability he makes chasing down and tackling running backs downfield a weekly occurrence. He can hold up at the line in run defense, especially in short yardage, with the best of them and forced many offenses to punt on 3rd and inches. He's an excellent tackler with his ability to grab bring down ball carriers with either one or two arms by far his best trait in this regard is instincts and high football IQ coming into play here as he tries to punch and strip the football in order to cause a turnover, something he's had success doing in college football. Wyatt probably has the hottest motor in the NFL draft among interior lineman because there seems to be no play on the field that Wyatt doesn't think he can make whether it be running quarterbacks out of the pocket and out of boards or chasing running backs 30 yards downfield which is a testament to his extreme competitive nature as well as elite conditioning and stamina as a defensive lineman. Devonte Wyatt played on a pitch count for the Bull dogs which certainly limited the opportunities he had to make plays for Georgia and it does show scouts just how productive he was to his team when he was on the field. Devonte Wyatt played in the SEC, the toughest college football conference in the country, and his production against top NFL prospects gives scouts great insight into how his skills will translate into the NFL.  He played on a championship team in 2021 and he and his counterpart in Jordan Davis were a huge reason for Georgia's title run which should earn him huge draft praise with his ability to come into the brightest of lights college football has to offer and win the game with a dominant performance by him.

It's easy to be dominant in the trenches when your next to the monster known Jordan Davis whose taking up at least two blocks every play allowing his fellow defensive lineman to win 1-on-1 matchups and while Wyatt certainly capitalized on those opportunities it does beg the question: Can he do that in the NFL with the help of a Jordan Davis like defensive lineman? Devonte Wyatt is very much a work in progress from a pass rushing standpoint as his sack total and film would suggest and continuing to polish his technique will be a crucial part of his development in the pros. His punches off the line can be inaccurate which can lead offensive lineman brushing them off and engaging with him early. Block shedding in a pass rush is difficult on an occasion as has average arm length as well as his tendency to leave his chest open to lineman. He's struggled against double teams on occasion I think more so due to surprise at times rather than an inability to hold up at the line.

Devonte Wyatt is going to need an excellent combine as well as great workouts with teams to show that he was a tag team partner with Jordan Davis on the defensive line rather Robin to his Batman because while Devonte Wyatt was certainly an effective defensive lineman it was in the shadow of Jordan Davis who offenses literally had to divert a good amount of resources towards in order to have a chance. Wyatt's athleticism, motor, technique, and nastiness is what's going to get drafted as those skills translate to the NFL very well but having to be "THE" guy on a defensive line rather next to "THE" guy could be a challenge for him. I think Wyatt immediately improves a run defense if paired with a quality defensive lineman and could develop into a menace in the middle by third year in the league and became a decade long anchor for an organization. If he can improve as a pass rusher, he has pro bowl potential as well.