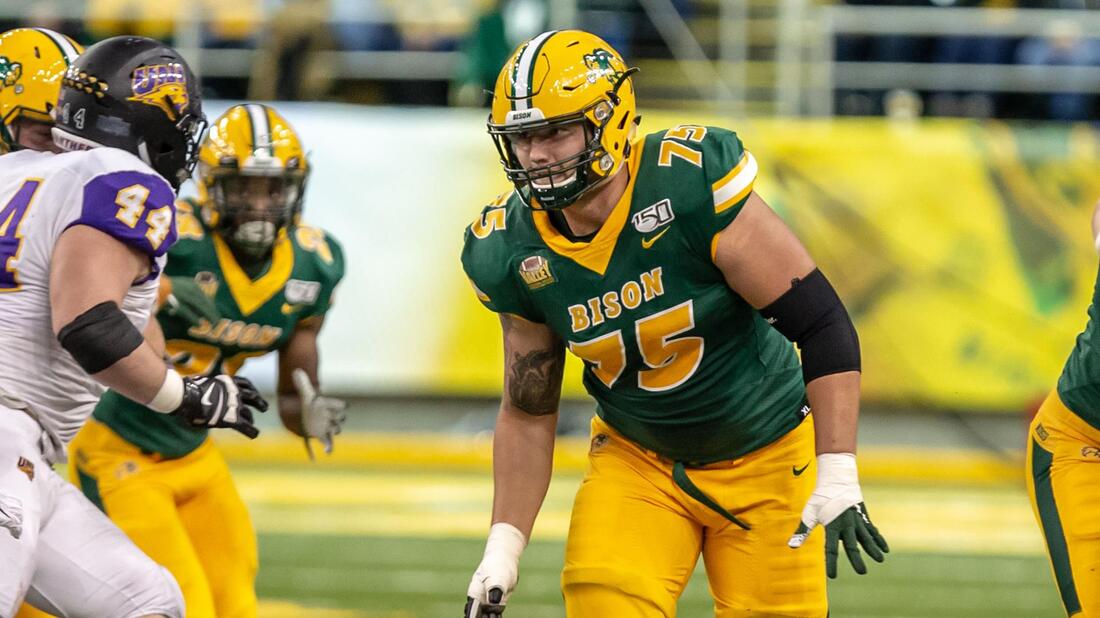 Dillon Radunz will go down as one the best offensive lineman to ever come out of the Missouri Valley Football conference and certainly the best to ever come out of the North Dakota State Bison's football program. He's been a man among boys since he stepped onto the field and has been a rock for the Bison's offensive line since his freshman year. He possesses prototypical offensive tackle size at 6'6" and 305 lbs. with great arm length and exceptional balance. His big hands be like vise grips if a defensive lineman allows him to latch onto his pads. He has very good upper body strength and is very effective standing up pass rushers who try to get into his chest. He has very good body lean and some of the most balanced feet in this draft class among the offensive lineman. He has very good technique in his feet and good flexibility in his back and hips allowing him to take punches from bull rushing lineman and recover quickly. He has a good punch that can stun defenders and give opportunities to take advantage He's very quick out of his stance and is rarely beaten off the snap. He keeps is opponents out his chest consistently and never seems to be caught leaning too far forward or backwards. Does a great job of riding his rusher out of the pocket and keeping his inside gap clean from stunts. He has a very good reaction time to blitzes and knows how to neutralize them to give his quarterback time in the pocket. He's a special talent as a run blocker where his nastiness and power are on full display. He has yet to be beaten in the trenches when he's tasked with creating holes. He's been the Bison's go to offensive lineman to run behind when short yardage is needed because he can't be stopped when he gets going. He's good at turning defensive lineman out of the hole and giving the running back some daylight when running through his gap. He's an excellent offensive lineman in the second level of a defense as he knows how to diagnose defenders angles well and engage the player that poses the biggest threat to make a play. He comes off the snap with surprisingly great leverage for a man with his height and effortlessly creates holes with upper body strength and underrated power in his base. He's a competitive offensive lineman who gives exceptional effort in games and in practice. He's a huge reason why Bison's quarterback Trey Lance was allowed to flourish the way he did in 2019 considering that he was rarely pressured on his blindside, let alone sacked.

The main thing that's going to keep a lot of teams from potentially drafting Dillon in the 1st round will be his level of competition which was poor to say the least. Maybe one guy from each team he played might get a shot at playing in the NFL but it probably won't happen. He has yet to play against an opponent from a Power 5 conference which would really show how good he really is. At times he can be overzealous with his punch and get caught leaning forward, leaving opportunities for rushers to get by. He's not very quick in space, even for an offensive lineman, and corralling linebackers and safeties in the second level can be a difficult task at times. While's fully recovered from the injury and has played exceptionally well, it's still worth noting that he suffered a torn ACL his freshman year.

​He's easily the best small-school offensive lineman to enter the draft in years but he will need to prove himself at both the Senior Bowl and NFL combine if he wants teams to take him in the draft. He may have to spend time at guard early in his career but his long term future is on the blindside of the offensive line.