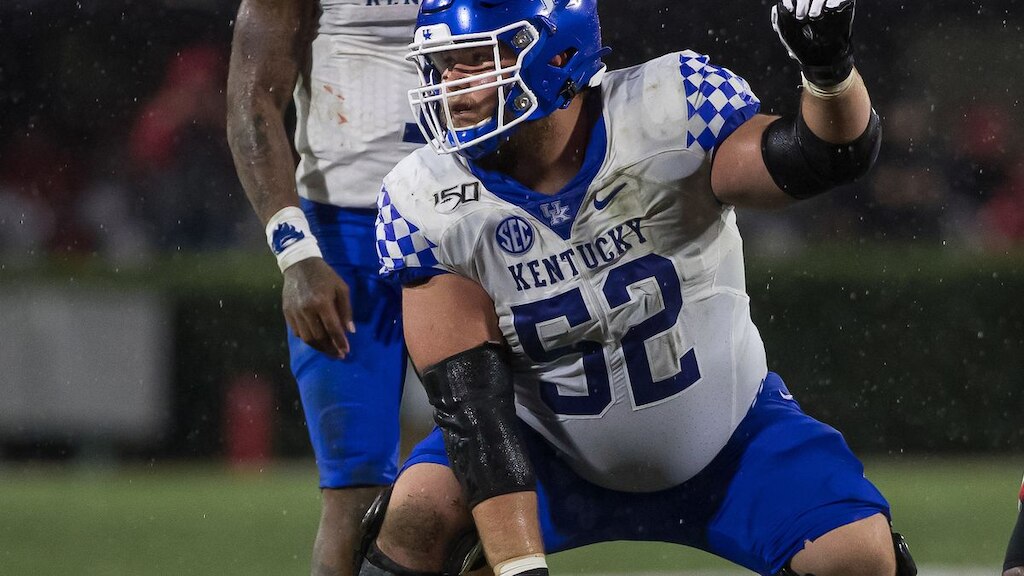 Drake Jackson has been the cornerstone of the Kentucky offensive line since his freshman year and has exceeded expectations for the Wildcats. He's built like a prototypical center at 6'2" and 310 lbs. with a very powerful base and impressive athletic ability. He plays with exceptional pad level given his low center of gravity and squatty frame and is a tremendous run blocker with his natural leverage. He comes off the snap very quickly and with plenty of explosion and quickly puts his man into a back pedal. He's very good at turning his man out of the hole and giving his running back some extra daylight to run through. He's very fast hands and is a technically sound hand fighter. He possesses a good punch and good upper body strength to hold his up and keep him from getting leverage. He's at his best on combo blocks where he can quickly drive his man off the ball, disengage, and make blocks in the second level of the defense. He's very agile and quick for a man his size and has no trouble engaging with linebackers and safeties in the second level. He has played against some of the best defensive lineman in the country and has held. He was probably the biggest reason for running back Benny Snell Jr. becoming the Kentucky all-time leading rusher as he would open up clean holes in up the middle of the defense, where Snell Jr. thrived. In pass protection, his very low center of gravity makes him naturally great at defending against the bull rush as he always seems to be the low man in that scenario. He possesses very good lateral agility which allows him to mirror most pass rushing defensive tackles in the interior of the defensive line. He does a good job of making calls at the line of scrimmage and recognizing stunts and blitzes. He does a great job of keeping his fellow lineman on the same page on run plays and effectively calls out blitzes.

While his compact size certainly helps him at his position it also doesn't help him against pass rushers who win with length. He has found himself on the losing edge against pass rushers that can get into his chest and drive him off the line. He's been susceptible to swim moves and rip moves at times and hasn't figured out how to effectively stop counter rush moves. Kentucky's ground and pound style of offense has somewhat limited his ability to showcase what he can do in pass protection.

Drake Jackson to me is more pro ready than most interior line prospects in this draft due to his size and athletic ability and should have one of the higher floors among lineman. He's a potential starter early in his career and a quality lineman once he gets his bearings.