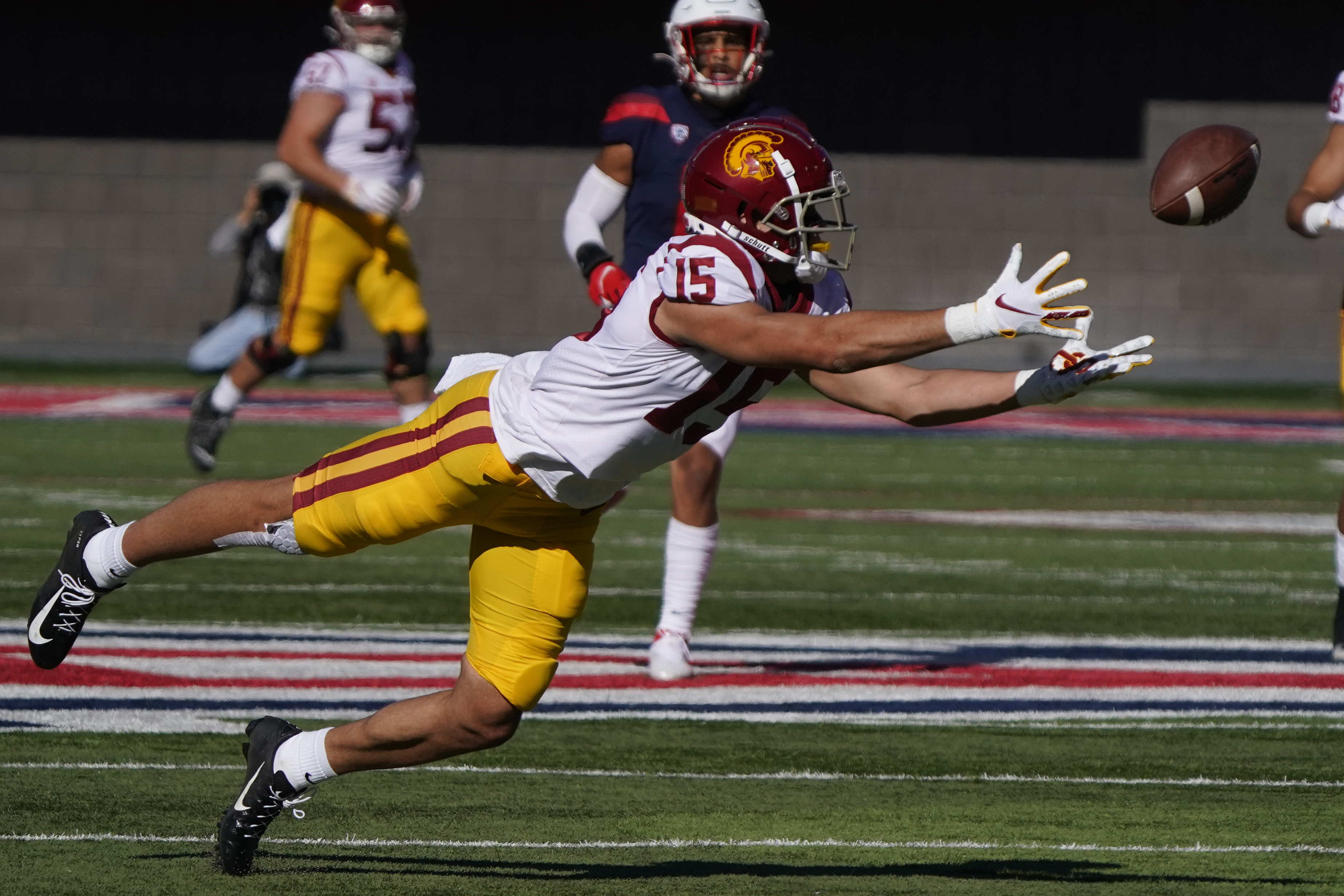 Photo by Rick Scuteri-Associated Press
Through all the turmoil that's been going on at USC, the one constant has been Drake London's stellar play for the Trojans which has sent his draft skyrocketing. Drake London brings elite level size to the receiver position checking in at 6'5" and 215 lbs. with exceptional size, length, and toughness. London plays the receiver position like an NFL fullback using his tremendous size and strength to not only get open but to also make plays. He has big hands with an impressive grip to haul in passes in contested situations. He's fast for a receiver his size and has surprisingly nimble feet allowing him to change direction quickly and make defenders miss. He's the best receiver in college football at getting yards after the catch because he's a player that refuses to go down when he has the ball in his hands. He possesses good speed and agility at his size and can be very deceptive in his burst both in his route-running as well as when he has the football. He runs through tackles like a powerback and when smells the line to gain, he will power his way across it. He has some wiggle in his hips that allow him to make defenders miss as well as make nice cuts on his routes. He's very good at high pointing the football and rather than letting it come to him and his build allows him to be a favorite to come down with the ball on every contested catch. He will put his body on the line to make difficult catches and has plenty of highlights of him diving for footballs. He has tremendous hands to go along with a very large catch radius which gives his quarterback a lots of room for error on throws towards him. He's made some highlight worthy one handed catches at USC which shows just how dangerous an offensive weapon he can be when paired with a mediocre quarterback in college, let alone an accurate NFL quarterback. He has exceptional leaping ability given his basketball background and is going to the betting favortie for jump balls in the NFL with his size, length, and vertical explosiveness. He doesn't allow press coverage to alter his routes and bulls through contact at the line. He's a red zone nightmare for defenses to his size and aggression and should find early success in producing touchdowns for a team. He has great awareness of the boundary on sideline catches and does a nice job of keeping his toes in inbounds. He possesses good route-tree and clearly shows that he's polishing his technique over his three seasons in college football. He's as tough as titanium on the field and isn't afraid to go over the middle in shark infested waters and take a hit to make a play. He's also a good blocker at the receiver position with his size and aggression and it only goes to show what kind of football player he is. He was a former USC Basketball recruit as well as football and his basketball hops and hands certainly translated very well into the position. London was one of the most dangerous receivers in college football before he went down with a season-ending ankle injury and when he was gone, USC collapsed as whole, showing his ridiculous value not only the offense but to the entire team as well.  He's an extremely competitive player and leaves it all on the field as well as bringing a contagious energy to the rest of his team.

He's not the most graceful or fluid athlete at the receiver position and while he does have enough athletic ability to make plays, it's not anything spectacular. He's a bit choppy in his footwork and his ability to run smooth routes is still a work in progress. Not a deep threat by any means and isn't going to burn corners down the field. He could bulk some more in his frame to better handle the rigors of the NFL.  Because of his lack of fluidity in his footwork and route-running he has a tough time getting good separation from corners and many of his passes can turn into contested catches early. His fractured ankle will need to be monitored and looked at

Drake London is an old school receiver with his toughness and size and should be a top target for teams in need of an aggressive receiver that will make the necessary plays to win games. His fiery competitiveness, raw ability, supreme are what separates him from the rest of the receiver class in this draft and those are traits that you can't teach in a player. He's going to have scouts and coaches fall in love with him during the draft process with the right quarterback, he could be a special player.