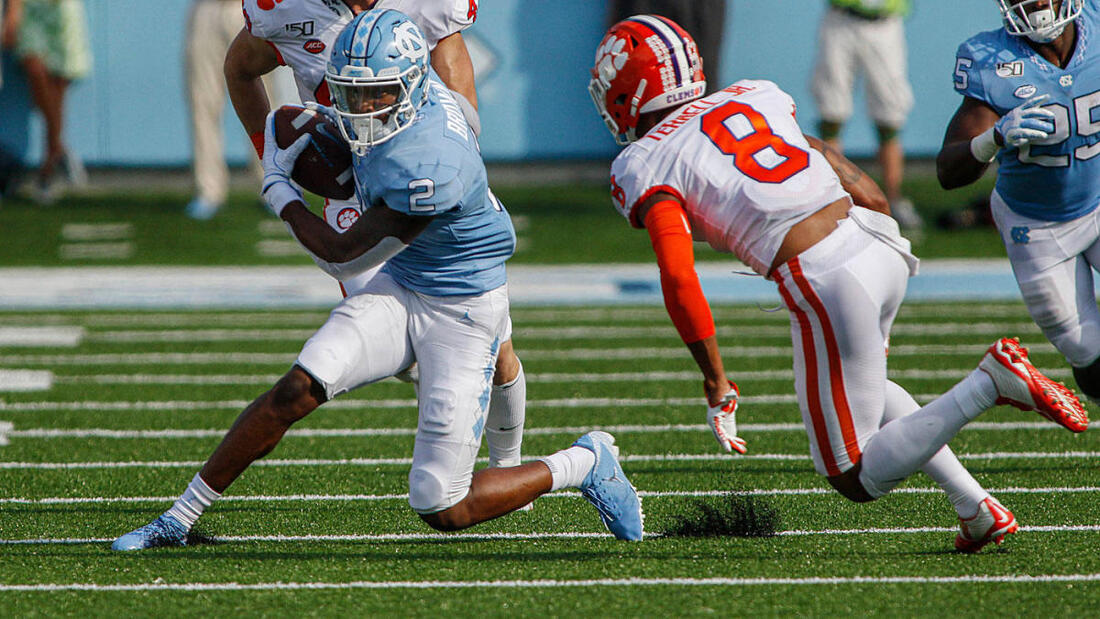 Dyami Brown was one of the more underrated receivers in 2020 and quietly has two straight 1000 yards receiving seasons for the Tar Heels. He is muscular 6'1" and 195 lbs. with great speed and agility. He was the Tar Heels offense's main deep threat in 2020 and proved difficult for corners and safeties to cover man to man. He's a dynamic athlete that can change gears very quickly on seam routes, allowing him to burn defenders. He possesses a very good sense for creating separation at the top of his routes and giving him some cushion to haul in passes. He has very good hands and rarely finds himself using his body to bring in passes. He's very agile in the open field and can create yards after the catch when given an opportunity. He does a good job of keeping his feet in bounds on sideline passes and knows how to drag his feet in order to make a play. He's a very explosive athlete that can make contested catches if need be. He's very good at stuttering defenders in press coverage, allowing him to use his speed to get by them. He showed himself in 2020 to be a capable blocker at the receiver position which is an underrated skill for NFL receivers.

He played alongside 2 star running backs in Javonte Williams and Michael Carter as well as his counterpart in Dazz Newsome who ate defenses alive as well, leaving Dyami Brown on an island most of the time. He has only ever lined up outside on offense, never playing in the slot and almost never being moved around which shows his lack of versatility. He mostly ran deep routes in college football but clearly has the ability to learn more and expand his route tree. He doesn't do enough after the catch consistently to show what he can do in the open field but that can also be attributed to his style of play. Didn't run enough underneath routes for teams to see his full potential as a route-runner and will need to prove in workouts that he can be effective at all 3 levels of the field.

Dyami Brown has a lot of talent and loads of potential to be a starting receiver in the NFL, but he has yet to show his complete skill set in games. You possibly blame North Carolina for underutilizing him in their offense and relegating him to simply deep balls and intermediate passes but it's going to be very important to show on his pro day that he's so much more than just a downfield threat.