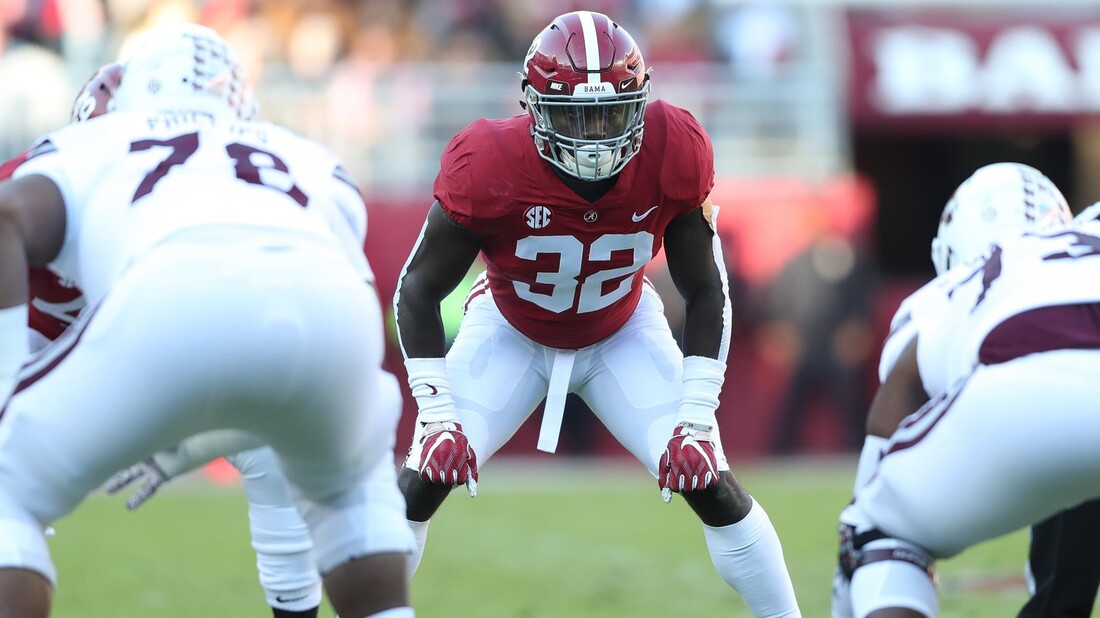 If it wasn't for a devastating knee injury during training camp last August, Dylan Moses probably would have been drafted in the 1st round of the draft this past April, and after a very successful 2020 campaign that saw Alabama take home the title Dylan Moses showed enough potential as a prospect to earn praise from scouts. He's a freakish athlete at the linebacker position with elite level speed, agility, and power in his 6'3" and 235 lbs. frame. He's got incredible upper body strength for a man his size and can suplex running backs that don't go down easy. He's probably the fastest linebacker to come out of Alabama in program history and that's not an exaggeration. He's as explosive a linebacker as there has ever been coming out of college and if he finds a crease in an offensive line, he will exploit it. He has a great deal of length in his body and could be a valuable outside pass rusher on defense from the linebacker position. He does a great job of disengaging from blocks, at least off of running backs, and making play in the backfield. He's a menacing hitter who plays with an edge in run defense. He's the last guy on the Alabama defense. A running back wants to cross paths on a run play because he's going to put a dent in their helmet. He's very good at diagnosing run plays and attacking rushing lanes before they develop. He's a textbook tackler with incredibly strong hands to grab and bring down ball carriers quickly. He's got the range of a fighter jet with the ability to make plays anywhere on the field. Limited playing time before his injury but showed just how dominant he could be if he was a full-time starter. Attacks the football when he sees an opportunity and clearly has a nose for the football. Rarely is outrun by players and is usually chasing them down quickly. Unreal explosion out of his stance  He's a very effective blitzer up the middle does a great job disguising his blitzes for maximum effect.

He's had the luxury of playing with one of the best defenses in the country that has elite talent in both the secondary and defensive line, allowing him to play a more simplified linebacker role. There was a noticeable drop in his speed and agility in 2020 and it was tough to tell if he had lost a step or if he's being cautious with his knee. His coverage needs a lot of work as he seems to get lost rather easily. He can lose his zone when covering short passes and has issues with man coverage as he doesn't do a good enough job of staying with receivers and getting his head around to know down passes. He doesn't attack the football enough when making tackles and will need to show more consistency at ripping at the football in the pros. He was more hesitant to blitz in 2020 and often found himself chasing players more often than attacking them and using his trademark ability to hit players that made him such a force for the Crimson Tide.

If you look at his 2018 tape, you see a ferocious linebacker that seeked and destroyed ball carriers every chance he got but his 2020 tape showed a more hesitant and patient linebacker that wasn't as willing to blow up plays and the fact that he didn't workout at the Alabama pro day is also concerning. Another year away from that devastating knee injury should help his confidence and ability but he's going to only have to get coached in coverage as well as land with a coach that can get him back to his old self. If a team can do that they can get a premium player at a discount price in the NFL draft.