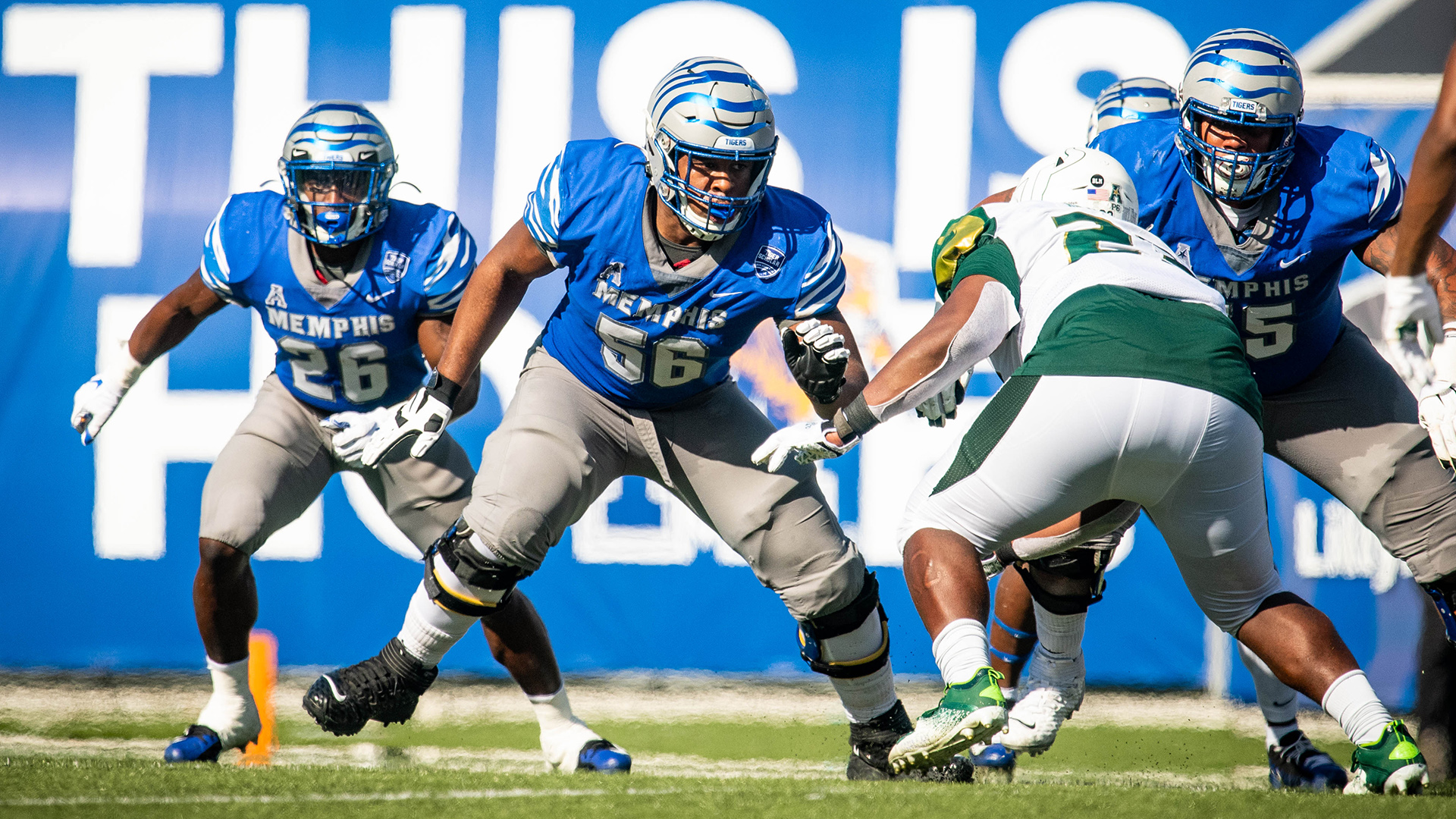 Photo by Matthew A. Smith-gotigersgo.com
If you could design an NFL guard prospect in a factory with any parts you needed the product would probably come out looking like Memphis's Dylan Parham whose play in 2021 certainly caught the eyes of all 32 NFL teams looking for interior lineman for their offensive lineman. At 6'3" and 315 lbs., Parham brings a muscle packed frame with exceptional athleticism, technique, and nastiness to protect his quarterback and create holes in the running game. As a pass protector, Parham has one of the best lower body anchors you'll find in a guard his size and when brings his hips underneath in him he can plant his trunky legs in the ground hold firm. He plays with phenomenal pad level and leverage and rarely finds himself getting driven off the line by defensive lineman getting underneath his pads. He's very powerful in his lower-half that also doesn't lack in the pseed department as his choppy feet show both good technique and excellent quickness. He's a very good hand fighter when engaging with defenders and does a tremendous job of keeping his chest pads clean. He has a quick punch that stun defenders and can pancake linebackers and safeties if he gets an opportunity too. When left untouched he possesses phenomenal quickness and agility in his base to ward off blitzers and keep himself in the play without having to lunge for blitzers. He's very good at recognizing stunts and blitzes in his gap and is highly capable both from an athletic and technical standpoint of neutralizing twists directed at him. When he's engaging in the trenches with defensive tackles in pass protection he has nasty streak that certainly helps make his opponent work for every yard upfield if they can get. As a run blocker, he plays with tremendous speed and nastiness that has helped put Memphis running backs on the map in the NFL. He comes off the line with tremendous explosiveness and can drive lineman off the ball with ease if he gets the angle on him. He takes excellent angles in the run game when engaging with lineman and if they are not careful he can overwhelm them and drive them off the ball. When he attacks the second level he's a nightmare for defenders to deal with because his speed, agility, and nastiness makes quick work of linebackers and safeties trying to get into the backfield. He's played both guard and tackle in his career and teams are likely to want to develop him at guard because of his frame and intangibles.He's tough SOB at the guard position who outgrew his previous linebacker role in high school when he came to Memphis and he hasn't looked back ever since switching to being an offensive lineman. He's highly competitive and has a relentless work ethic and teams looking for athletic guards to plug into their line should be very happy with him if they pick.

He's a zone-blocker primarily and may not work in other systems very well. His punches can be inaccurate on occasion when he initiates contact and too often finds himself outside the numbers which mitigates his power. His upper-body strength is questionable and it shows it's deficiencies when he's driving lineman off the ball as he struggles to upend and brings his feet behind him. Although he showed up to the combine at an excellent 311 lbs., his weight has been an issue for him in his college as he's played football at 285 lbs. and if he wants to survive in the pros he'll have to maintain his weight. He's struggled at times when dealing with powerful interior defensive lineman due his lacking mass strength in his upper body and hitting the weight and developing his upper half will do wonders for his pro career.

Dylan Parham is a tremendous athletic specimen and his prowess in both the run and pass game should get him plenty of looks throughout the draft process. Nastiness and good athleticism has often led to success in the NFL and Dylan Parham has both traits in spades and if he can bulk up his frame and develop more power in his upper body he could be a highly reliable starter in the NFL. I expect him to be a decent starter in the NFL and certainly has the potential to be a quality lineman in his career.