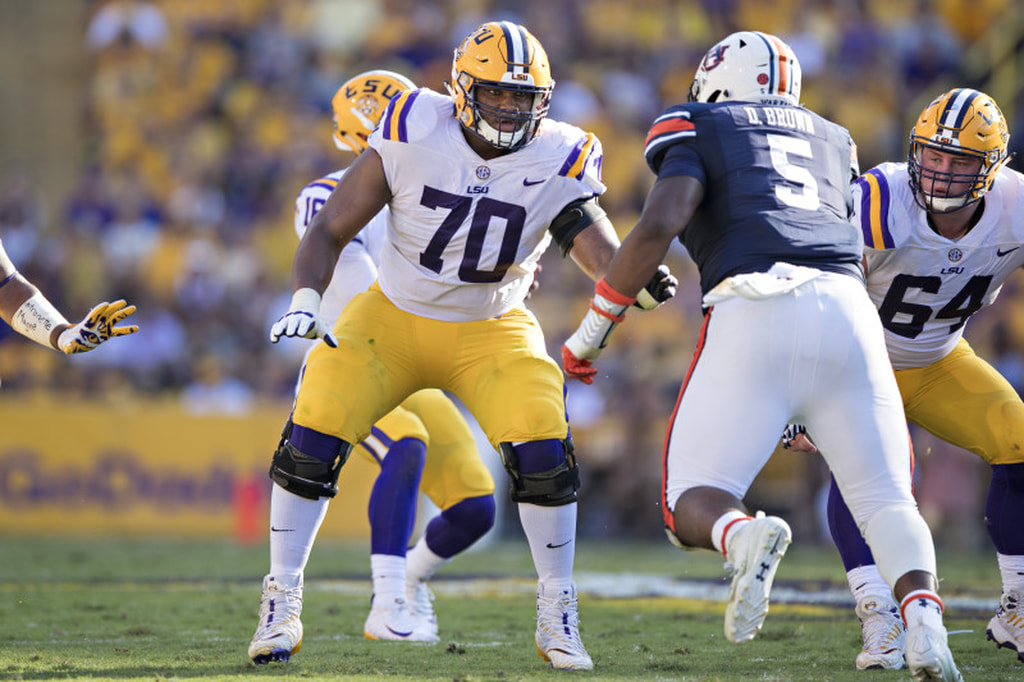 Photo Wesley Hitt-Getty Images
LSU didn't have a worthwhile year in 2021 with coaching controversy and roster upheaval with injuries to key players but the one player that showed up and played great for his team was guard Ed Ingram. At 6'3" and 310 lbs., Ingram brings great size, athleticism, and a high football IQ. In pass protection he displays exceptional agility and footwork that allows him to be within range of making great blocks on any player attacking his gap in the line. Quick and choppy feet allow him to assist on double teams with little adversity and does a great job disengaging smoothly to make blocks. He's a very talented hand fighter in the trenches that does a great job of swiping and clubbing hands away from his chest to ensure that he maintains control of the battle so he doesn't get beaten early. He has great length in his arms for the guard and has overwhelmed shorter armed defensive tackles that can't reach his chest. He's exceptional at recognizing stunts and twists in his gap. Defensive lineman does a tremendous job of making great blocks on them that often toss lineman to the ground with their own momentum. He has exceptional instincts when recognizing blitzers that are aiming to attack his gap and can be reliable on an offense to make calls and adjustments for his offense. Blitzing linebackers in college have had difficult times getting through him to the quarterback due to his nimble feet and has rocked a couple linebackers backwards in his career. As a run blocker, he's a very capable pulling guard due his speed for his and takes angles on blocks when running through the hole. He can reach the second level with ease and can make blocks with efficiency to extend run plays. He's capable of turning defensive lineman out of the hole to open up lanes for his running back and does a nice job of disengaging from blocks to try and continue up field. He can lead a convoy for big runs with his athleticism and has been seen making blocks 10-15 yards downfield. Ingram is a highly intelligent offensive lineman that's clearly studied the position and should grasp and learn mental aspects of any offense in the NFL very quickly. He's a versatile guard prospect that can play on both sides of the center position and with his high football IQ and build I wouldn't be shocked to see teams try him out at center in his NFL career with his ability to develop quickly. He's extremely tough and competitive even in a losing effort which was the case in 2021.

He has an undeveloped base for the guard position and has issues with getting enough leg drive behind him to bull defensive lineman off the ball. He needs to add more power to his upper body as well as he struggles at times to overwhelm powerful offensive lineman with strength as well as grip defensive lineman with a consistent lock in his hands. Not a mauler in the interior of the offensive line and could develop more of a nasty streak in the run game to wear down defensive lineman throughout a game more. His punch off the line in the run game can be inconsistent in terms of power at the point of contact. His hand placement in his punch is also inconsistent with some plays hitting the chest pads with accuracy and some plays nearly giving his opposing lineman a bear hug and becoming more precise in his punches will benefit him greatly. His lacking power in his base really becomes noticeable in pass protection when facing bull rushers as he struggles to reestablish his base and halt his defender in his tracks. His hip flexibility needs some work when taking on bull rushes as he's too often upended at the point of contact. His pad level is inconsistent in both the run and passing game and it hurts his ability to make successful blocks off the line in the run game as well as preventing lineman from collapsing the pocket in the passing game.

Ed Ingram may have suffered a bit in 2021 due a bad year in the organization from top to bottom and the talent around Ingram also didn't help him much either. His quarterback would often take too long in the pocket and the running backs on the team all seemed to play hero ball and if he were to go to an organization with good pieces and a stable front office and coaching staff, he could be a stud for a team. He'll need to polish his technique and develop more power in his frame but the mental aspects and athleticism needed for the position are there; that's what coaches want to see in a prospect regardless of position.