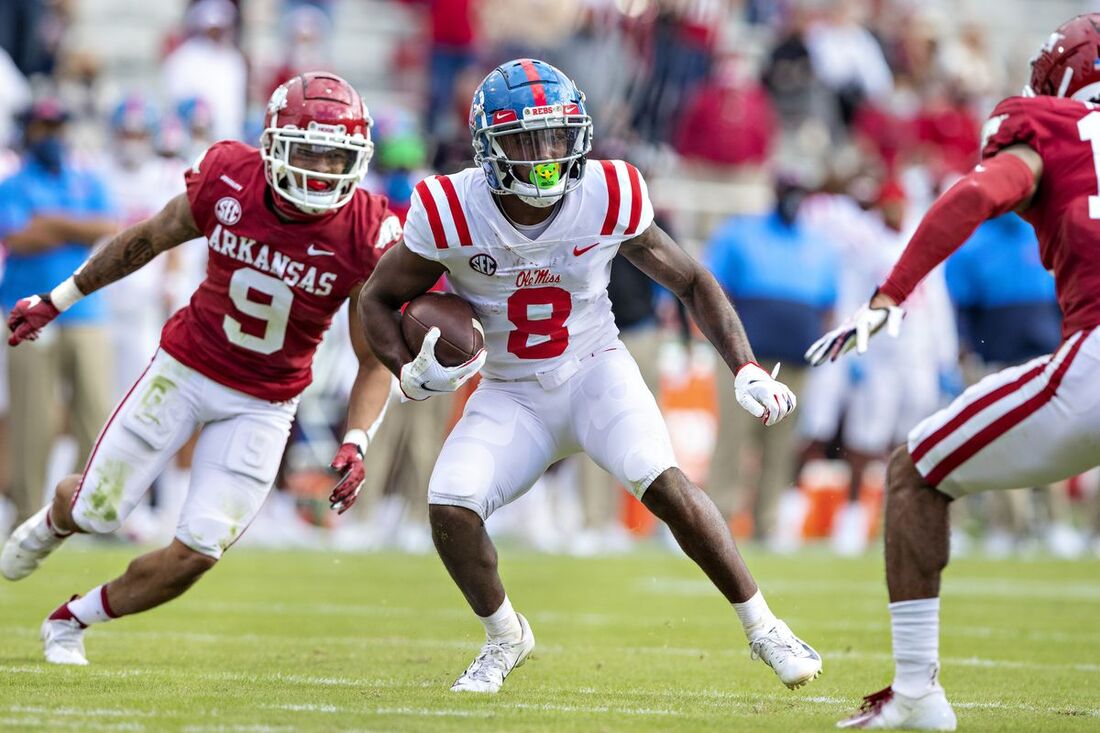 With all the exciting receiver talent in the SEC being produced this year Alabama, Florida, and LSU, many have forgotten about Ole Miss's stud receiver in Elijah Moore. He's a rock solid 5'9" and 185 lbs. That brings a great deal of speed and agility as his size would suggest. He's a very dynamic route runner who clearly works at honing his craft. He's a very fast player who can burn defenders down field as well as get to top speed quickly. He has a very big route tree and is used all over the field. He has good hands and does a great job of tracking the football in the air. He's a big play waiting to happen in games when left unchecked and can make a defense pay on deep passes as well as short ones. He's a major problem after the catch because he can elude defenders in the open field for more yards. His agility and ability to stop on turn on a dime has left many defenders in the dirt and a special talent in the kick return early in his career. He played in the SEC at Ole Miss and always found himself getting doubled due to the lack of talent on his team. He's one of the best in college football at separating from corners in the middle of the field with his excellent explosion and speed. He has a good release for a player of his size, often winning through quickness and technique, and can be a dangerous player to chase on seam routes. He plays tougher than most receivers his size as he shows a willingness to go over the middle and take a hit to make a play. He was electric in big games and always brings his best when the lights are brightest.

He's not a hands catcher which is a big deal to many offensive coordinators who want receivers to be sure handed. Will likely be viewed as a slot receiver due to his size and skill set and could affect his playing time in the NFL. Most of his success came from blown coverages that allowed him to have free runways at the end zone. His shelf life is questionable for me if he continues to take punishment in the middle because his body isn't built for those collisions. He has some potential maturity issues on the field after making headlines for his peeing dog touchdown celebration, although I haven't seen perform any such move since then.

I think he's going to be relegated to a slot receiver in the NFL and probably won't ever find himself outside of the at role. He's a great option in the slot and will certainly find success on deep balls in the NFL. His ability to create separation in tight spaces and his breakaway speed should make him an effective deep threat.