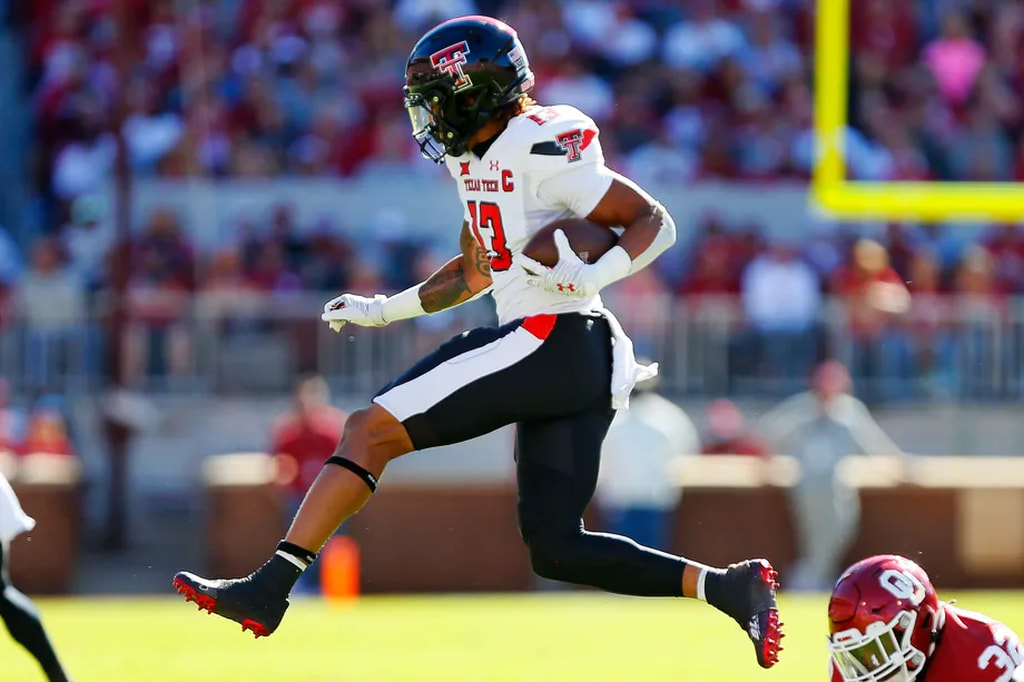 Photo by Brian Bahr-Getty Images
The Texas Tech Red Raiders have been a factory for producing offensive talent and the newest product from the program in Erik Ezukanma looks to have great potential. At 6'2" and 210 lbs., Erik Ezukanma is a well built receiver with great athleticism, excellent length, and good ball skills. Ezukanma is a big receiver that has been weighed in at 220 lbs. in his career and he certainly knows how to use his size to bully opposing defenders trying to cover him. He comes off the line with immense explosiveness that can jolt defenders trying to cover him in press coverage. He fights through jams at the line and has more than enough power in his frame to work through grabby coverage on his routes. In off-man coverage he showcases excellent agility and speed when breaking on short slants and out routes which has yielded tremendous gains in his career. Ezukanma has made his bones in his NFL career as a contested catch receiver and YAC receiver as he knows how to create big gains from short passes. In a contested catch scenario, Ezukanma attacks the football like his life depends on it and of all the tape I have seen of him, I have yet to find a corner that has wanted the football more than he does. He does a great job of high pointing the pass in the air and rarely uses his body to catch passes as he consistently uses his hands to reel in throws. He has excellent body control in the air with exceptional contortion of his frame to give himself the best chance of coming down with the pass. He has plenty of highlight reel catches in traffic in his three year career which shows a player with exceptional mental grasp of positioning himself to beat his defenders for the pass. When he's going deep down field, he has shown a great ability to track the football in the air and come underneath the pass with having to adjust his speed on the fly which has yielded quite a few deep touchdown catches. As a playmaker after the catch, Ezukanma has proven to be a menace to bring down both in the open field as well as going head on into defenders and displays rare toughness and grit for a receiver in this regard. He's shown an ability to put a nice cut move on a defender in the open field and has enough speed to take off downfield for big gains or long touchdown runs. He's a powerful and physical runner after the catch that can break tackles and get more yards and did so on a regular basis for the Red Raiders offense. He's fearless when engaging linebackers and safeties on collisions and has enough toughness and strength to power through tackles and fight for every last yard he can. He was such a dynamo after the catch for Texas Tech that he was used a bit as a sweep player or end round runner on offense and has two rushing touchdowns in his career to show for it. He's been the leading receiver on the Red Raiders the last three seasons and has had to do so with a revolving door of mediocre quarterbacks that have often thrown poor passes in his direction which shows he's certainly not foreign to the concept of turning chicken scraps into chicken salad on the field. He's a tough and competitive receiver who plays with a white-hot motor and you can be assured that he'll give you his best on the football field.

One of the reasons he's proven to be a highly reliable contested catch receiver is because of his lack of nuance and polished route-running that often gets him into these situations. He's not very good at separating from his opposing defensive back in off-man coverage as his footwork of the line is rather clunky and doesn't provide him any misdirection in his route. Outside of quick slants, Ezukanma doesn't his that explosive burst at the top of his routes to create separation and too often leans into his routes giving away his direction. He has one speed as a route-runner with no gear shifting in his route which makes it easier on his opposing corner when covering him in man coverage. Not much of a salesman on sluggo routes or quick hitches and will need heavy coaching in route-running to be a truly effective receiver. Not a versatile receiver prospect outside of the occasional sweep play and asking to create mismatches in the slot or in the backfield likely won't yield good results. Limited route-tree for a receiver prospect and will need to grow it considerably to make the field on a consistent basis. Relies too much on his athleticism and above average strength to play the receiver position at times which would explain his high production against weaker competition. Not immune to the occasional focus drop and teams will need to be aware of this issue when drafting him. Not a receiver that has shown much ability reading and attacking zone coverage often although he played primarily outside so this area could potentially be improved in the offseason. His lack of route-running in his 4th season in college football shows potential developmental roadblocks that coaches have to hurdle to get him up to speed which could cost him reps early in his career if he can't process information quickly.

While it's not a comparison by any means I see a lot of the same qualities that made Dallas Cowboys receiver Dez Bryant such a monster in the NFL and just like Bryant, Ezukanma doesn't possess the route-running nuance needed to make a great NFL career long lasting. Ezukanma will need to grind hard off and on the field to heavily polish his route-running if he wishes to stand the test of time in the NFL and ever see the field on a consistent basis. If he can do that, which is asking a lot, he's got potential starter capabilities in the NFL.