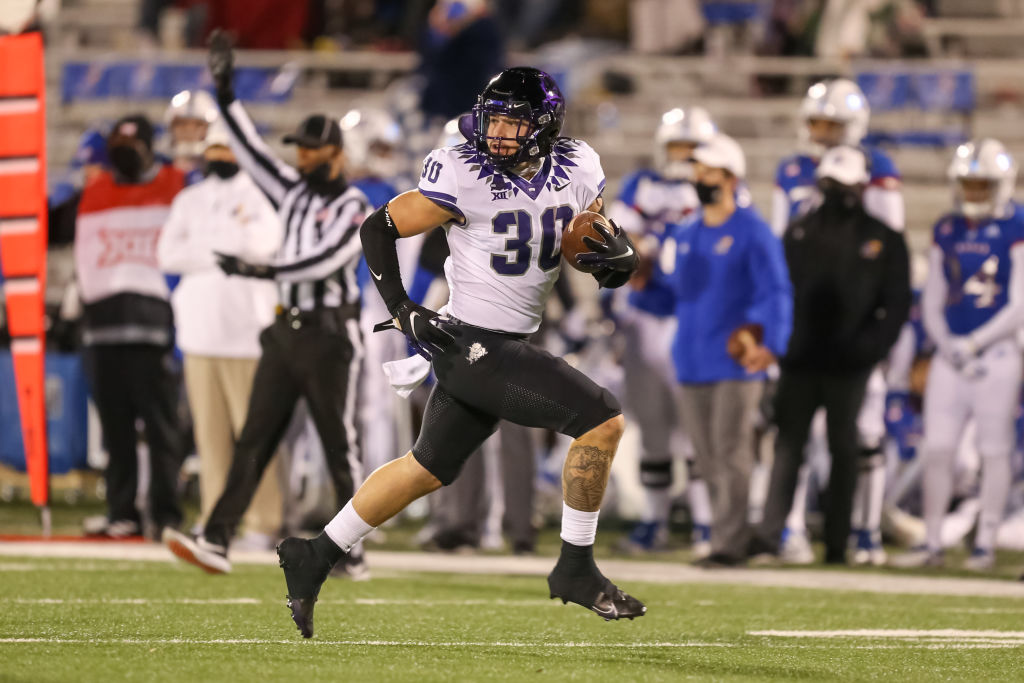 Garret Wallow was a playmaker on the TCU defense and has the potential to replicate his success at TCU in the NFL. At 6'2" and 230 lbs. with great athleticism and instincts. He's very quick to hit top speed when he locks on to a ball carrier and has the upper body strength to bring them down quickly.  He's very explosive out of his stance and does a nice job of weaving through the traffic. He can pack a punch when he hits ball carriers and does a nice job of tackling head on and stopping them in their tracks. He does a nice job of reading offenses and meeting ball carriers in the hole rather than catching them from behind. He takes great angles when making tackles and rarely finds himself losing his grip. He has excellent instincts in run defense and is always around the football at the end of the play. He's as fiery a player as you'll find in this draft as he brings incredible intensity, competitive fire, and an infectious do-or-die attitude that energizes his fellow teammates. He did a great job in2020 of trying to cause fumbles by always attacking and ripping at the ball carriers hands. He's not afraid to attack the trenches in order to make a play and he's very good at evading lineman to tackle his man. He's a very good athlete that has the necessary speed to play sideline-to-sideline with the range to make plays anywhere. He's a very flexible athlete and it shows when blitzing the line and attacking gaps. He can squeeze through cracks in the line and make plays in confined spaces. He can make tackles in the open field and has the recovery speed to stay within a play. He played safety early in his TCU career and shows a good understanding of passing concepts. He has the necessary agility and speed to cover zones quickly and proved himself to be very effective against some of the best passing teams in college football.

When he attacks the line of scrimmage has issues with fighting through blocks when he's caught. He lacks the power in his upper body to effectively engage lineman and shed blocks. Despite his three seasons at linebacker he still shows that need development in his game such as his tendency to take false steps in run support. He can at times bite on play action and read-option plays as he's very eager to blitz into the backfield and make a play. He could add more weight to his frame to better withstand the rigors of the pros.

His tape shows a player that brings the necessary electricity to become something more than just another linebacker but his reactive tendencies and shortcomings with his size could hinder his promise. If he puts on weight and becomes more patient at the position, he could be an early starter in the NFL.