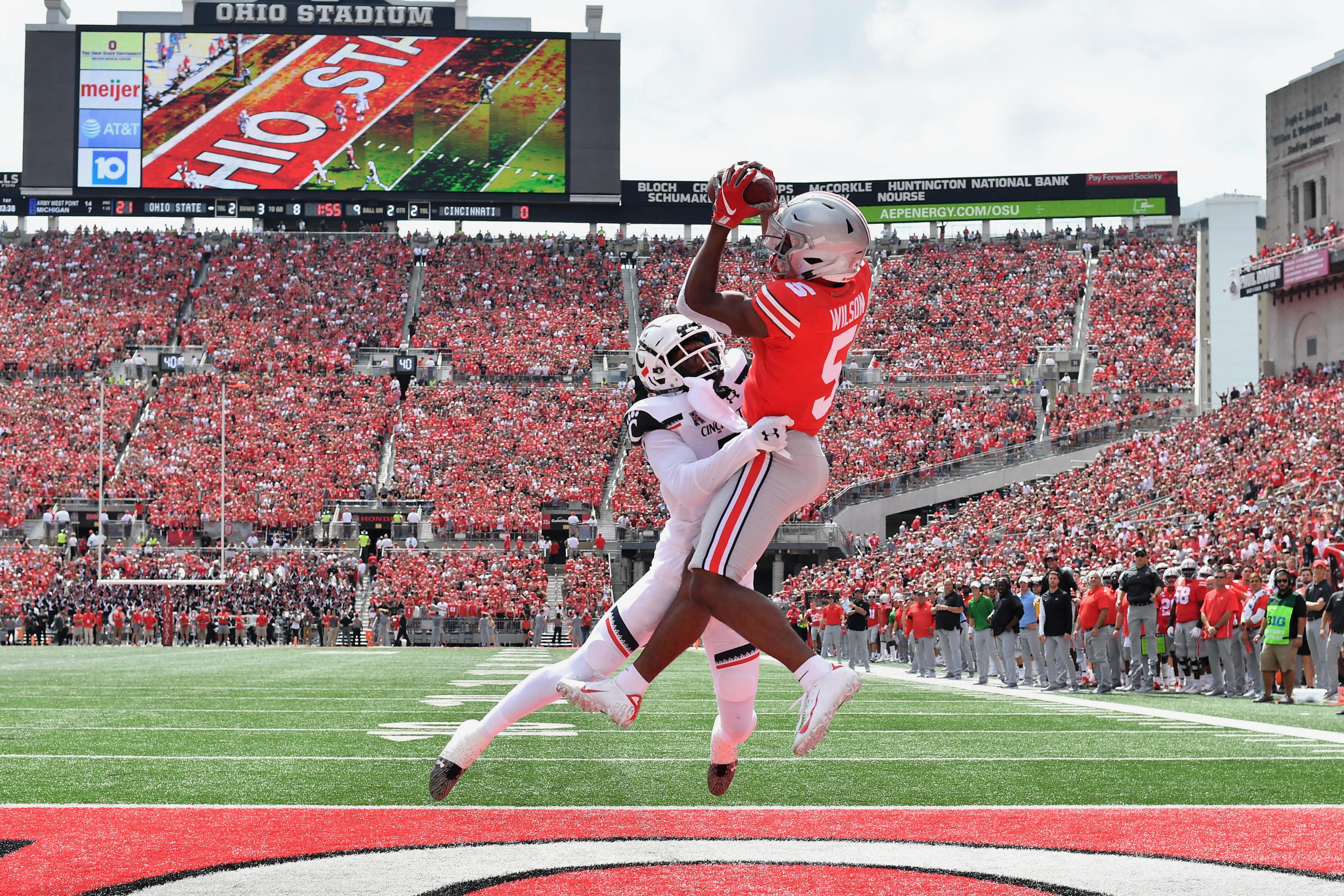 Photo by Jamie Sabau​-Getty Images
Ohio State's receiving corps were the best in college football without a close second in Chris Olave and Garrett Wilson and while Olave was the safe and secure receiver that can get open and pick up the yards to put points on the board or keep a drive going, Garrett was the big play waiting to happen receiver that could make a college defense look like a pop warner team with his electric athleticism and playmaking ability. At 6'1" and 180 lbs. brings elite athleticism, excellent route-running, and big play ability. He's a magician when he's in space because he can juke, spin, and slip through tackles with the best of him and although he doesn't possesses that 80 yard catch run play on his resume, he possesses that level of ability as a YAC receiver and any team with a creative coordinator should have him high on their board. He's a very polished route-runner whose elite quickness and agility allows him to get open early and often early in his route. He has a very good route-tree and knows how to run each of his routes very well and which makes him one of the more polished receivers in this draft. He can get immense separation at the top of his routes both on shallow routes and deep which certainly helps him nab easy passes. He has soft hands when catching passes and does a nice job of reaching out for passes rather than using his body which is nice to see for a receiver of his stature. He's very good at avoiding contact when he can not just by making defenders miss but going out of bounds when he has his chance.  He has breakaway speed when he has green grass in front of him and on more than one occasion burned defenses deep. He's a very versatile wide receiver prospect that has played in the slot, on the outside, and has even been used on reverses, RPO's, and has return experience. He's a great supportive teammate based on film as he's always palling it up with his guys after they make big plays and I do like how he'll trash talk a bit on the field in order to try and gain a psychological advantage. He found room to make plays with his limited opportunities, I use limited relatively loosely, as he had to compete with Olave and Smith-Njigba and despite that issue he still finished 2nd on the team in receiving yards and receptions which is a testament to his He's very tough for receiver his size especially in the run game where makes a tremendous effort to block and coaches do love to see a player with his size limitations work hard for the benefit of the team.

Garrett Wilson has benefited a great deal playing alongside Chris Olave because Wilson gets to face single coverage often against a teams second best cornerback which allows him to take advantage of lesser players and inflate his stats a bit. He's benefited from two stud quarterbacks throwing him the football in former Ohio State quarterback Justin Fields and current Ohio State quarterback Justin Fields. He has questionable hands not because he can't catch but he's often looking ahead to make a play before he's got the ball secured, resulting in drops. He can play outside in my opinion but most of his production came in the slot, especially in 2021 after the rise of their new set receiver in Jaxon Smith-Njigba, and he'll likely need to be eased in the outside in the NFL. Like his counterpart in Olave, Wilson lacks functional strength in his frame to fight through press coverage and may have to be schemed open early in a play if a team plans to use him outside in his rookie year. Not going to be a great jump ball receiver, despite his ability to elevate, and won't be much of a fade route receiver in the NFL. I didn't see a great deal of catches in traffic with Ohio State's offense scheming him open quite often and many of his catches have come with huge separation from his route-running and blown coverage on defense.

He's an interesting receiver prospect in this draft because of his route-running, big play ability and versatility but I do worry about how much he benefited from getting left on an island against the second and third best corner on an opposing defense. He's electric and can make plays happen but any team that drafts him needs to be careful about how they use because I think he can play everywhere. I think easing him into an outside role on offense would be a much wiser decision. He'll be a phenomenal asset on offense in the slot with his quickness and agility to both quickly run and get open past the line to gain as well as pick extra yards with his elusiveness. He's at least a highly reliable slot receiver in the NFL and if he can prove himself on the outside he could be a very dangerous weapon, and potential pro bowler, in the NFL.