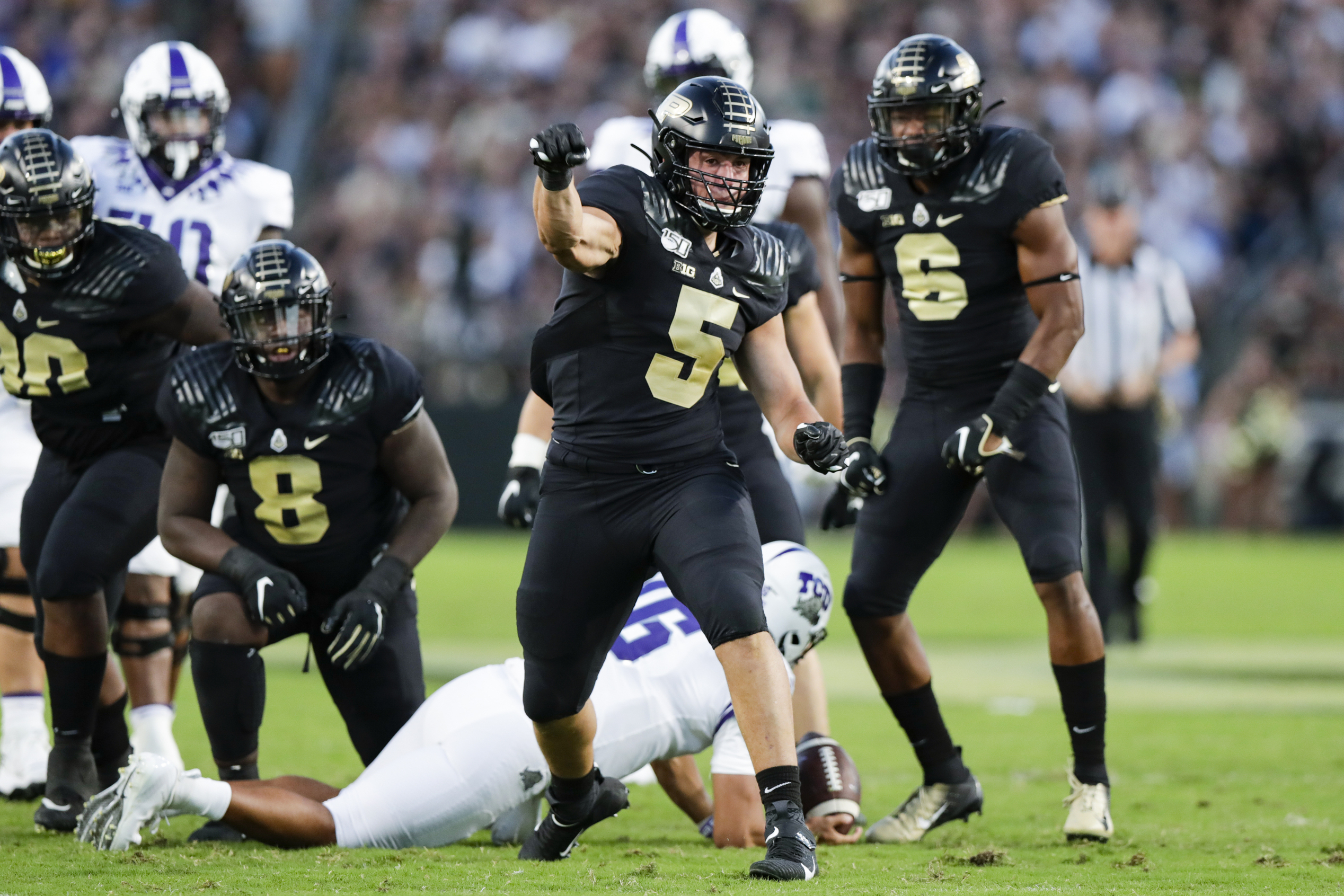 Photo by Michael Conroy-Associated Press
George Karlaftis has been one of the most disruptive edge rushers in the BIG-10 for the past three seasons and has shown enough talent to warrant a high draft selection. At 6'4" and 275 lbs., Karlaftis brings tremendous size and power to the edge rusher position. He has a very broad frame with power in his upper and lower half of his body that he uses well. He has a very impressive first step with great explosion and agility to make moves quickly and get pressure early. He has great speed for his size and plays fast when he locks onto the football. He has good arm length to help keep offensive lineman out of his chest. He does a great job of keeping his pad level low and establishes better leverage at the point of contact on a consistent basis. He has very active and quick hands to swipe punches and get free quickly when attacking offensive tackles. He has a powerful punch that helps him stack and shed offensive lineman and keeps offensive tackles from overwhelming him with power. He’s a phenomenal pass rush technician despite his lack of college experience, an injury and covid-19 cut his 2020 six game season to just two games, which gives him a very high floor as a prospect. He has a very quick and effective swim move that has been used both inside and out on offensive tackles. His low pad level helps him a great deal when landing his swim move with consistency because it lowers his chance of his chest being a target for tackles and it allows him to quickly initiate the move without the offensive lineman picking it up and neutralizing it. He has a very powerful stack and shed move with upper body strength as well as a potent inside dip and rip move. He has tremendous lower body strength as well and possesses one of the better bull rushes in the draft among edge rushers. He has more flexibility than expected for a edge rusher as compact as he is and bending the edge on offensive tackles is not lost on him as a pass rusher. He can play with his hands in the dirt as well as standing up as a pass rusher and has found success from both stances. In run defense, he possesses more than enough power in his frame to hold his edge on outside runs. He shows his high football IQ on fakes and reverses as he’s rarely fooled, and knows how to disrupt plays when he reaches the backfield. He’s a great tackler with good form and vice grips for hands to latch and one-arm tackle ball carriers. He attacks the football in both the run and pass game and causing turnovers clearly is a goal of his. Since his phenomenal freshman year in college, he’s been treated by teams as a number threat on the Purdue defense and constantly is facing double teams which has shown his ability to fight through immense protection. He has shown the ability to fight through contact at the line and take on tackles and guards. He’s very good at stunts and twists and brings immense power up the middle when he engages guards. He’s a high motor player with tremendous toughness and doesn’t stop playing until after the whistle. He’s a competitive player who brings his “A” game when the lights are brightest.

George Karlaftis is quicker than he is fast, and while he is fast for his size he isn’t going to run down ball carriers when giving chase. He has a tendency to stand up on run plays if it’s not obvious where the offense is running the ball, giving up his chest and shutting him down for that play. He has strictly played edge rusher in his college career with very little snaps inside so using his as a versatile defensive line chest piece might be out of the question for him in his NFL career, although he certainly has the size to play both. He can have trouble shedding blocks once an offensive tackle gets into his chest and disengaging from contact is something he will need to develop in the pros. He suffered an undisclosed leg injury that ended his already short 2020 season and while it appears he has recovered fully, it’s still noteworthy given it’s secrecy.

If George Karlaftis had more speed, he’d be a guaranteed Top 10 pick with his level of technique, athleticism, and size for the position but the only question for him, outside of him cleaning up some deficiencies in his run defense, is answering if he’s a sack artist or a guy that gets pressure. Either way I think he makes an impact his rookie year in the NFL and his high floor tells me that he has the potential to make a few pro bowls in his career.