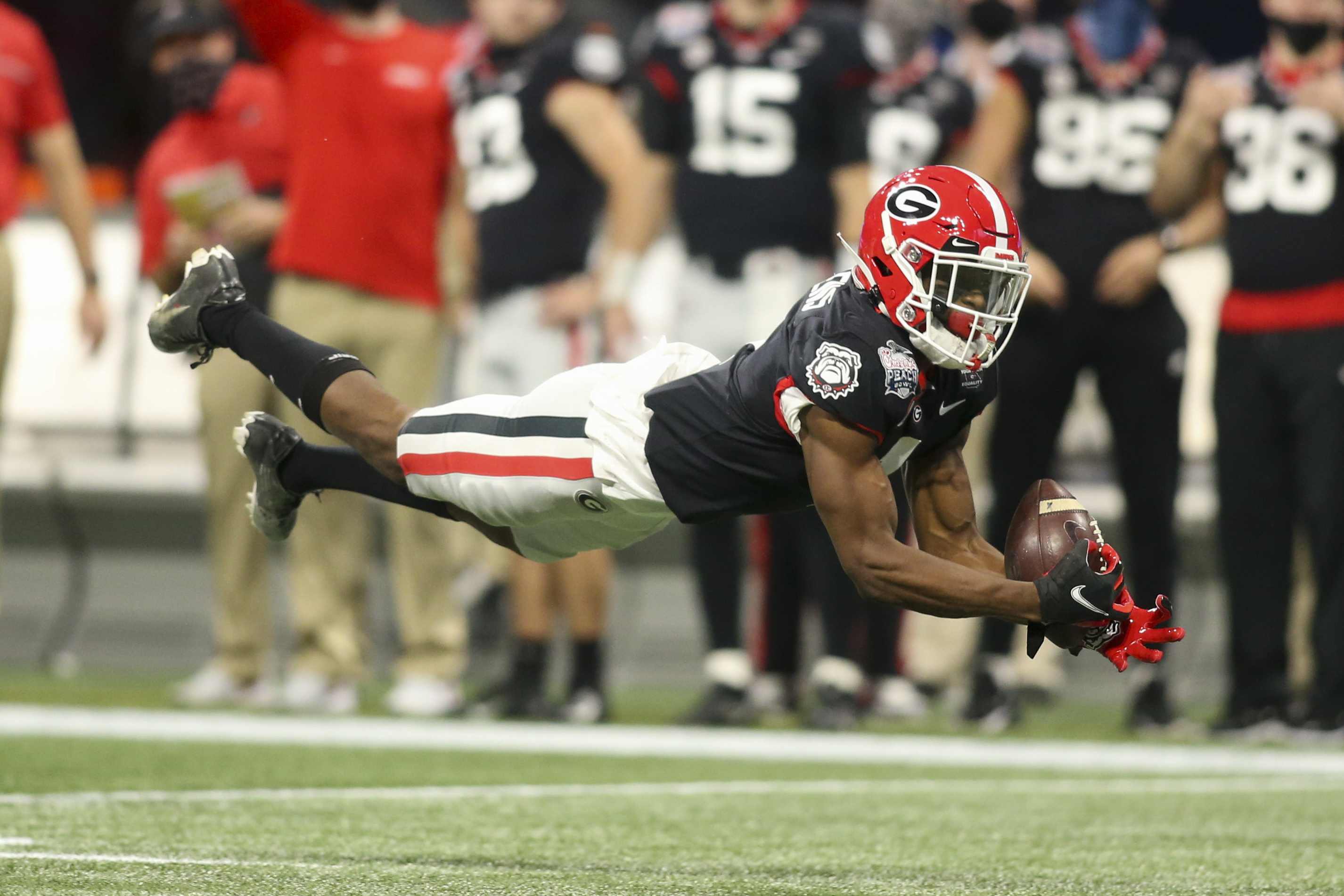 Photo by Brett Davis-USA Today Sports
George Pickens has had one of the more injury plagued college football careers I have seen in a very long time but it's a testament to his ability as a receiver to still show in his limited opportunities just how good he can be if the ball is thrown his way. At 6'3" and 200 lbs., Pickens brings great size, phenomenal athleticism, and exceptional hands. George Pickens has been the best receiver to come out of Georgia in a very long time and if it wasn't for some injuries in his career, he probably could have set records at the university. He's an electric athlete on the field and was a mismatch for many cornerbacks that played against him. He comes off the line with a great explosion and can scare corners very easily coming out of the gates and forcing them to give him cushion. He has extremely reliable hands that can pluck balls way out his frame and his catch radius is tremendous which allows quarterbacks to play with confidence when they throw footballs in his direction. He has excellent vertical explosiveness and outreaching corners for jump balls was something Georgia quarterbacks relied on him to do constantly. When he has the football in his hands, he can make tacklers miss in the open field as well as break away from tacklers as he can slip from defenders quickly and his ability to pick up the line to gain was a major factor for the success of the Georgia offense. He can make catches deep with his ability to burn defenders that he can pull sluggo moves and without a real deep threat for this offense, the Bulldogs struggled with his presence. When you think Georgia Bulldogs you think an extreme version of a Ground and Pound offense as Georgia's constantly putting running backs and offensive lineman into the NFL and occasionally a receiver will pop up from the program but Pickens production came from limited opportunities and often less than accurate passes and NFL teams love players like him that make chicken salad out of chicken crap. His recovery from his torn ACL in the spring is what movies are made of because most players would have buckled under it and rehabbed for next year but seeing him work his butt to get back on the roster with four games to spare and make crucial catches to bring Georgia the title is simply astonishing and it's testament to every characteristic he has that HOF players had when they played which is toughness, determination, and perseverance.

His torn ACL in the spring of 2021 was expected to end his season but miraculously found himself recovering for the final four games of the season and making a crucial catch in the College Football Championship Game and while it certainly shows his incredible work to comeback from a devastating injury, his knee will have to be checked out to ensure that it is fully healed and not rush job to get back on the field. He's a capable route-runner and his route-tree needs growing in the NFL which will take a good receiver coach to help manage. He has, while super ripped and muscular, a lanky frame that needs more bulk to and adding at least 10-15 lbs. to it could be a great way to lengthen his career. Not a versatile wide receiver by any means and is strictly an outside option in his NFL career. His lacking muscles in his upper body can hurt him against bigger press corners and building will certainly help him separate from press coverage much easier.

George Pickens has the makings of a very good outside receiver and with a quarterback that can deliver him accurate passes he could be a special player but he's got work up route-tree and become a more fluid route-runner to truly maximize his potential. Teams are going to absolutely love his story and his toughness and I can certainly see that in the right situation, he could a quality #1 receiver in the NFL.