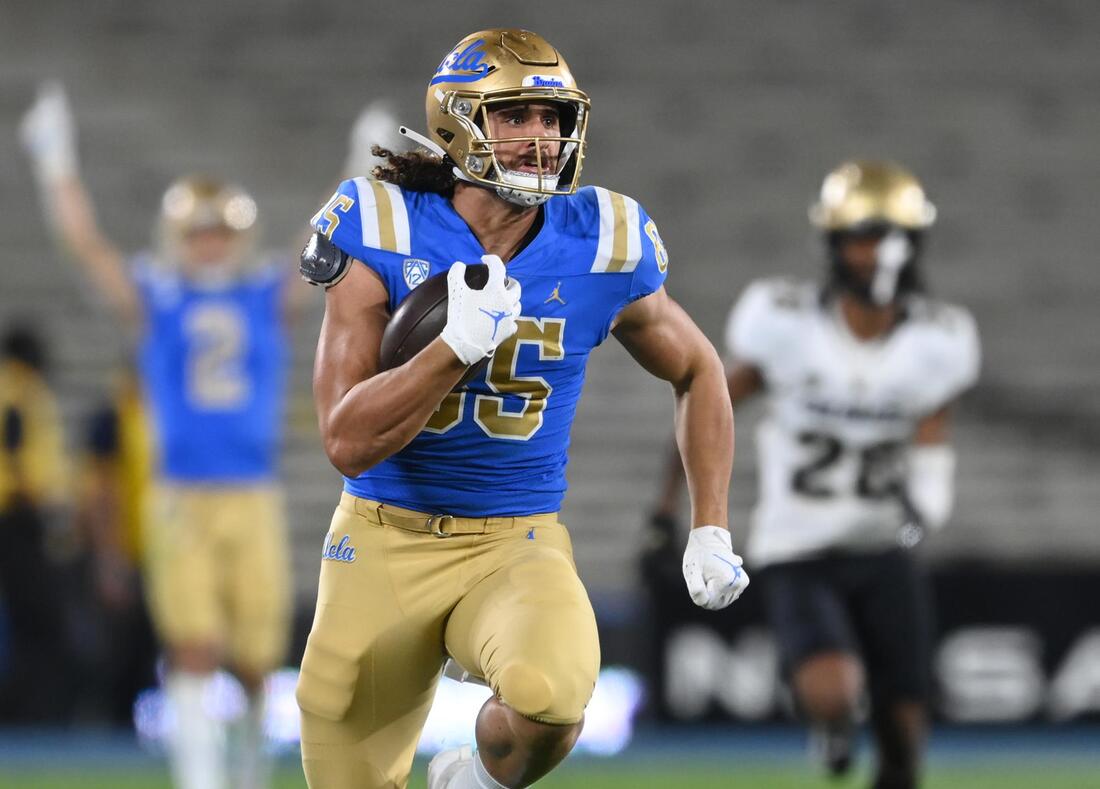 Photo by Jayne-Kamin Oncea-USA Today Sports
The UCLA Bruins were a surprisingly good team in 2021 and a significant portion of their offensive success came from the play of tight Greg Dulcich. At 6'4" and 245 lbs., Dulcich brings good athleticism, excellent ball skills, and a knack for making big plays. A converted wide receiver, Dulcich displays excellent nuance and fluidity in his route-running that has allowed him to beat defenders regularly in 2021. He comes off the line with good footwork and explosiveness, whether in-line or in the slot, and has an attack plan for getting open in coverage. In man coverage, he does a great job of changing his gears in his route to disguise his breaks at the top and knows how to use his size and length to outreach corners and safeties for the ball. He possesses a very good route tree given his days as a receiver and will be able to seamlessly transition into any NFL offensive passing system. He gets tremendous separation at the top of his route which as he possesses good explosiveness in his lower half and is very good about snapping his head around to the quarterback. Dulcich possesses great hands at the tight end position that consistently provide a soft landing for the football and he's been exceptional at securing the catch through contact. He has a great catch radius that allows him to overwhelm defenders at the catch point and he's no stranger to diving and leaping for footballs away from his frame. He was a difficult tight end for corners and safeties to deal with on contested catches in traffic as he not only possesses great length but because he possesses excellent vertical take-off ability that allows him to become a favorite in a 50-50 situation. He does a nice job of taking the pass least resistance when running after the catch by following his blocks and making the occasional juke move to get up field and often takes two tacklers to bring him down. He possesses a high football IQ given his successful transition from receiver to tight end and has been used as a versatile offensive weapon on some short tight end pitch-n-catches. He's a competitive blocker despite shortcomings in this area and will get better with time. He's taken snaps in the slot and at the X and Y receiver positions and I expect him to be able to line up in the same fashion in the NFL. He's a high motor player that has some toughness to his game and teams can be assured that he'll give 100% on every play.

I wouldn't categorize Dulcich as a blocker in his NFL career and probably won't find himself being used in the run game very often. He doesn't play with much play strength as a tight end and this has negatively affected his ability as a blocker. Lined up mostly outside the line at UCLA and probably won't have the same success in a run-based offense that requires him to drive defenders off the ball. Quicker than he is fast as a tight end teams may need to scheme open a bit on deep routes. He needs a bit of a runway to reach top speed and has been caught from behind on more than a few occasions. He can lean into his routes at times and will need to improve this to get more separation from defenders at the top of his route.  Needs more muscle on his frame to become a more effective blocker in his NFL career and may have to live in the weight from his first couple seasons in the NFL. Not one to make defenders miss in the open field and often gets tackled by the first defender.

Greg Dulcich was a versatile offensive weapon at UCLA in the receiving corps and certainly has helped him throughout the draft process as teams slowly but surely look for weapons like him at the tight end position every year. Dulcich will need to become a much better blocker and work on filling his frame with more muscle in his career but the difficult nuances of the position that can take years to develop is something that he has quite the head start on and could be an impact player for a team within his first few years in the league.