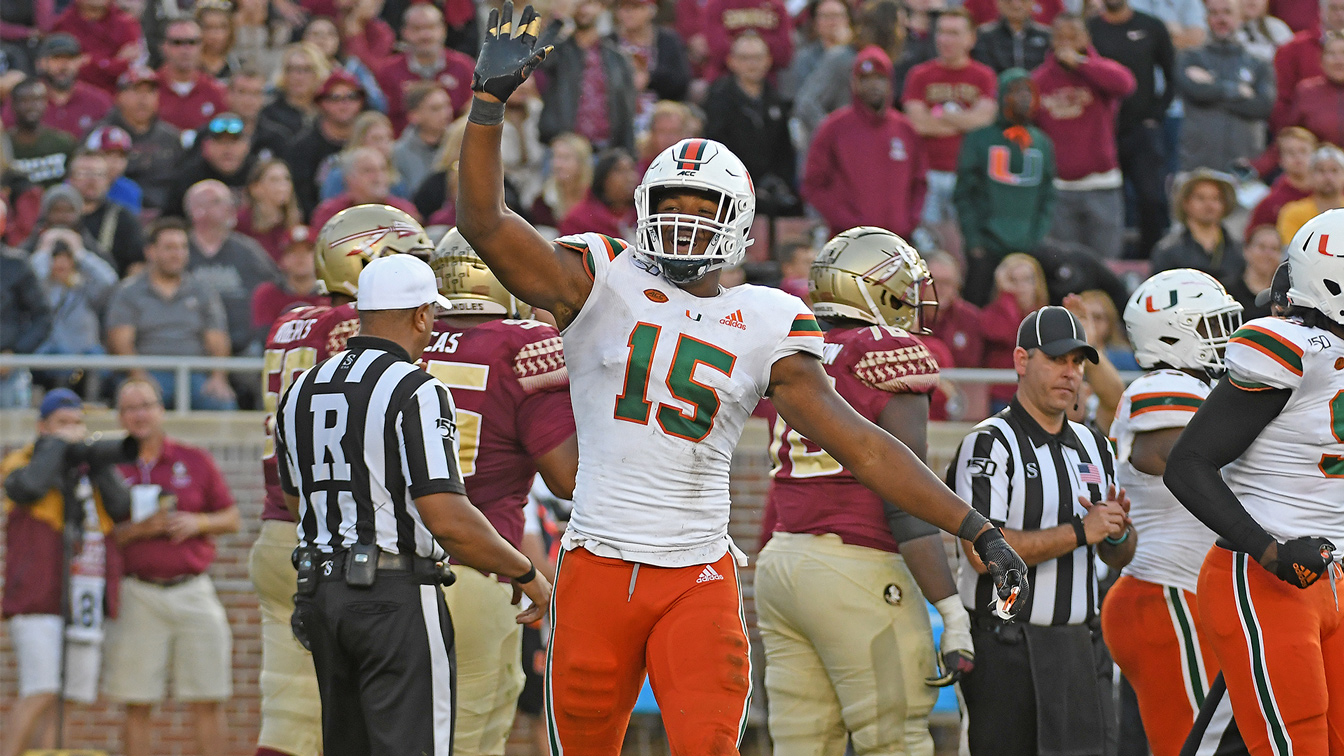 Gregory Rousseau may have opted out of the 2020 season but his 2019 year was a ridiculous season, dominating as a pass rusher from all over the defensive line. He's a freakish specimen at the edge defender position, measuring in 6'7" and 255 lbs. with extremely long limbs and powerful arms. He's very explosive off the line of scrimmage and despite his size he always seems to establish the better leverage against offensive lineman. He's fast hands and brings a lot of power behind them when he punches. The best foot quickness a college football prospect has had in over a decade. He's got elite level flexibility to bend the corner on the edge and make any offensive lineman's life a living hell on the football field. His best attribute may be his positional flexibility with his ability to effectively line up all along the defensive line as well as play the stand up outside linebacker and rush in a 3-4 defense. He uses his length better than any pass rusher in the last 5 drafts and makes his transition into the NFL that much easier. He's still learning the position since being recruited out of high school as a wide receiver and has shown unbelievable progress adjusting and thriving which shows incredible football IQ. Is always looking to bat down passes and disrupt throwing lanes if he fails to shed blocks. He comes off the line with excellent pad level and does a great job of maintaining it through his progressions when putting moves on an offensive lineman. While not always successful, he will look for the strip sack if he is in the right position to get it. Underrated power in his upper body which is why he's such an effective bull rusher. Does a great job of countering cut blocks and is quick to regain balance and attack the quarterback. He has some experience playing in coverage from his high school days of playing safety and I can definitely see him roaming the edge in zone coverage effectively with his athletic ability, although it would be a stretch to say that he would be effective.

He's very raw in his pass rushing moves and it shows up on tape when he can't win with his physical attributes. No counter rush moves in his repertoire but as mentioned before he's still learning the position. I would like to see him play more consistently because while I have seen him absolutely dominate college football games, I have seen him disappear in some too. Needs to play the run more consistently but clearly has shown promise in run defense as well. His absence from 2020 will be a detriment to his draft stock but given the lack of pass rush talent overall in this draft, I doubt he falls far.

He's still growing into his body, he's still working on his technique, and he's already the best edge rusher in college football which gives him easily one of the highest ceilings in the 2021 draft. He's going to need some serious coaching out of college given his short career playing on the defensive front but sky's the limit with him and if he gets put onto the scheme, he could become a superstar very early in his career. His raw ability, size, and athletic ability make him too good of a prospect to pass up and I fully expect him to go in the Top 15.