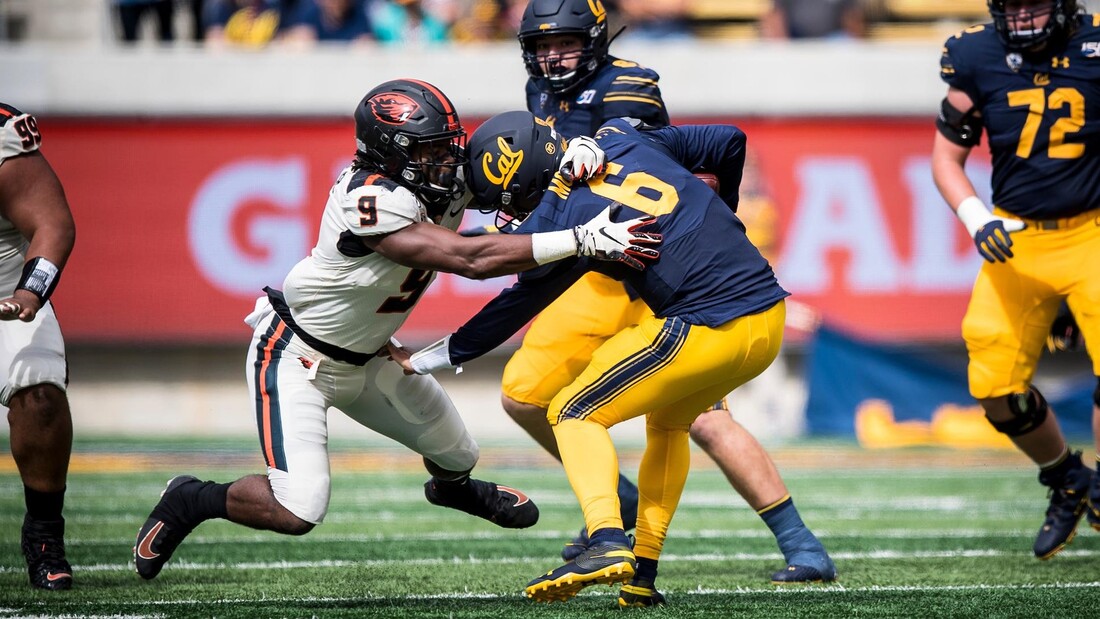 Hamilcar Rashed Jr. was a demon off the edge for the Beavers in 2019 but a subpar 2020 season has put draft stock into a tailspin. He's got excellent length at 6'3" and 250 lbs. with a long wingspan and a rare motor. He's an excellent athlete with speed and agility to burn and is a hard player to stop once he gets going. He's a very flexible pass rusher which makes him a dangerous defender coming off the edge with his ability to duck and bend the edge. He plays with unreal intensity and competitive fire that energizes his fellow teammates and gives his defense an edge. Aggressive tackler that makes his presence felt on contact. Has no fear of taking on blockers in run support and fights through blocks like his life depends on it. He's got some power in his arms to walk offensive lineman into the quarterback using his length. He has an excellent swim and rip move has been hard for PAC-12 offensive tackles to block. His speed to power transition is quick and explosive and should do well in the pros. He has a very effective push-pull move that makes him a dangerous second effort rusher. He showed in 2019 that he can be a game wrecker if he smells blood in the water and teams will hope he can bring that same level of play into the pros at some point in his career. He was circled by every offensive coordinator in the PAC-12 in 2019 and most teams still couldn't contain him. He's a very agile athlete on the edge and has no issues with changing direction and giving chase quickly. He's an excellent backside pursuer who brings enough speed to run down ball carriers. He can play offensive tackles like a one-on-one matchup and it shows his ability to play chess as a pass rusher by setting offensive lineman and staying one step ahead.

His size, currently, limits him from playing with his hand in the dirt in the NFL and depending where he's drafted in the NFL he could be asked to pack on more muscle. Run defense is not his best attribute as he can get pushed around by athletic offensive tackles that can counter his rip and swim move. No counter rush moves if he fails the snap of the ball and can find himself getting caught in the wash at times. Not a ton of production coming out of a 3-point stance and will likely need to play in a 3-4 scheme to find success. Not enough experience in coverage or enough skill to play as an every down pass rusher and might have to be a situational rusher early in his career. His 2020 season was very disappointing considering he went from 14 sacks in '19 to zero sacks in '20 and he will need to show out in his workout as well as win over coaches in interviews.

He's got the goods to be a major force off the edge if coached up right. If he can improve his ability in run defense and polish his pass rush technique he could be a very reliable every down player. His ceiling in a 3-4 scheme is very high with his athleticism and competitive nature and if he can get put into the right situation in the NFL, skies the limit for him as a prospect.