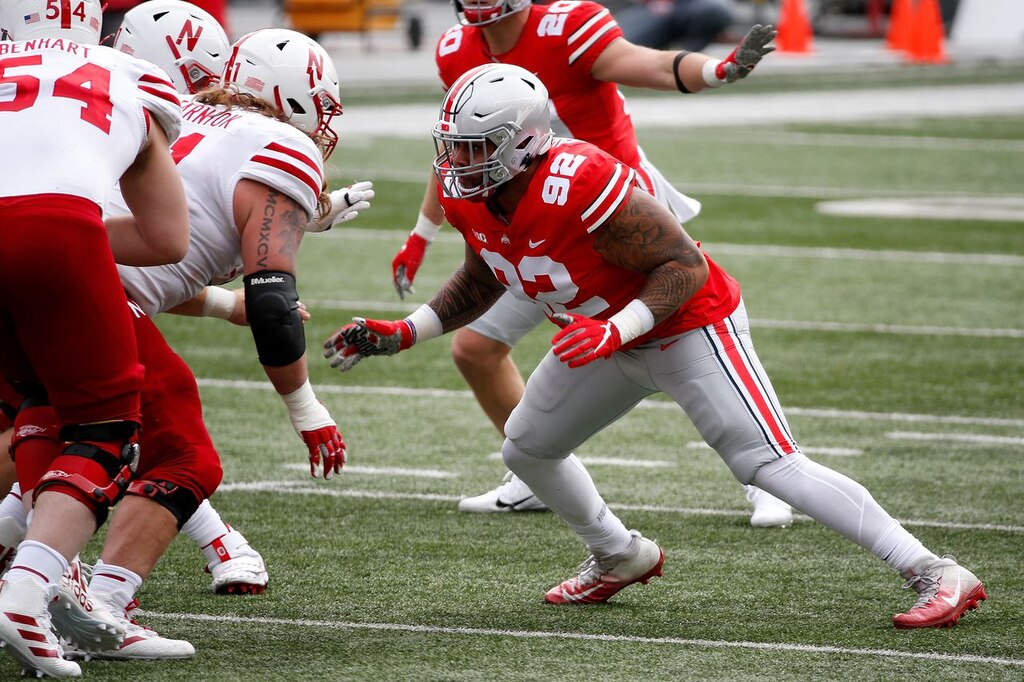 Photo by Kirk Irwin-Cleveland.com
Haskell Garrett has been the anchor for Ohio State’s defensive line for the last three seasons and will now look to take his talents to the NFL. At 6’2” and 300 lbs., Garrett brings excellent power and explosiveness to the defensive line position. He comes off the snap with excellent pad level which is made easy with his height being on the shorter side and is quick to engage early and create pressure quickly. He has great power in his compact frame and brings excellent drive from his lower half. He has a good punch and strong hands to hold onto chest pads and keep himself locked in. He’s very twitchy in his lower-half which allows his stutter step at the line and initiate moves more effectively. He has a quick swim move off the line that allows him to get into the backfield quickly if the interior lineman is caught off guard. He has a good push pull move in the interior that can help him tackle the quarterback if he tries to escape up the middle. He has a good bull rush that can collapse a pocket quickly if he gets into his opponents chest pads. He’s a vicious hand fighter at the line who gives great effort to keep his pads clean in pass protection. He has great pursuit speed for his size and has shown the ability to change direction quickly to plays opposite his side of the field. In run defense, he does a phenomenal job of using his lower center of gravity and power to hold down his gap and force runs to go around him rather than through him. His exceptional pad level really helps him consistently collapse runs up the middle. He keeps his base wide and shoulders squared at the line which helps him mitigate and halt double teams against him. He also has proven himself to be a much more consistent gap shooter in 2021 with him being the most experienced player on the defense and can force running backs to cut back out of lanes or stop in the backfield as he comes charging in. He’s a very violent run defender who will bring rare intensity when attempting to shred blocks. He’s a good tackler that does a great job of finishing tackles quickly without giving up yardage after contact. He plays with phenomenal toughness and tenacity in the trenches and allows his fellow defenders to make plays around him. He has lined up all over the defensive line for Ohio State which allows him to play in a multitude of fronts potentially in the NFL. He’s a high motor player and ferocious competitor who will do-or-die in the trenches to get the job down.

He has very short arms for the defensive lineman which hinders his ability to be a consistent and productive pass rusher up the middle. He doesn’t have many pass rush moves in his arsenal, outside of his swim move and push-pull move, and adding a spin or club-swipe move would benefit him greatly in his NFL career. He doesn’t have any counter rush moves to use when block shredding and it really affects his ability to continue to get up field. He doesn't possess the size to play nose guard or 1-tech and doesn’t have the length to play on the edge in 4-3, limiting his position to being a 3-tech in a 4-3 or a 5-tech. He has trouble with blockers that can utilize length and power against him and while he puts up a fight he often finds himself getting neutralized in the run game. He’s not very flexible in hsi frame which makes it difficult for his squeeze through gaps in the trenches and make plays. He doesn’t try to strip the football when making tackles and will need to make this a part of his skill set if he wants to find success in the NFL. His short arms make it difficult for his to try and bat down passes at the line when he can’t break loose and get free from blockers.

Haskell Garrett is a high effort, high motor, and high intensity player which has helped him greatly at Ohio State not only in maintaining his starting position but also helping anchor his defense against some of the best offenses in college football. He has seen his production in 2021 sharply rise compared to the rest of his career, especially in the sack and TFL columns, which should get him plenty of looks from scouts. Garrett plays with competitive fire and tenacity coaches absolutely crave in players and his powerful and compact frame should certainly earn him praise from defensive coordinators running a 4-3. He’s a high floor-low ceiling kind of player but in the right scheme and if paired with a coach that knows how to get the best out of him, he could be a very good starter in the NFL.