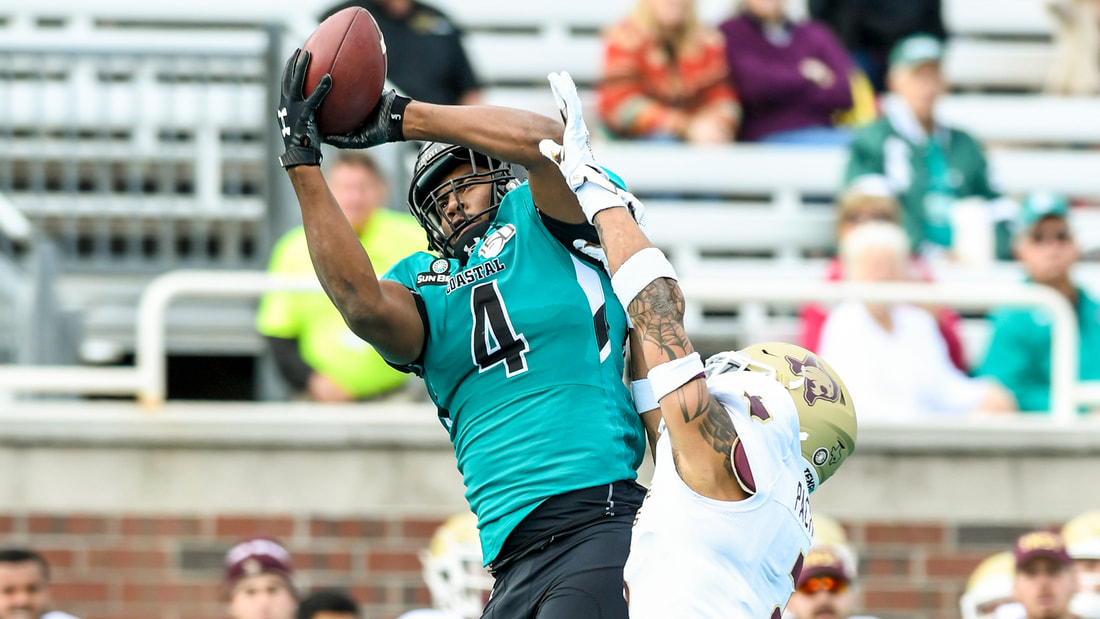 Photo by Coastal Carolina University Athletics
If there's a small school stud that NFL teams are going to be clamoring for in this draft it's Coastal Carolina's Isaiah Likely whose production and potential are just uncommon in players from his Division. At 6'4" and 240 lbs., Likely brings elite athleticism, ball skills, and playmaking ability to the tight end position. This guy is one of the best home run hitting offensive weapons in the draft regardless of position or level of competition as he absolutely scorched defenses in college football. His ability to take short passes and turn them into 60 yard house calls in this draft is second to none among tight ends and he clearly showed himself to be a man amongst boys athletically. He brings exceptional hands to the position with his ability to leap and pluck tough catches out of the air and come down with them as well as plenty of catches on wobbly passes or even tipped balls. He's the scariest tight end in college football to leave room to make plays because he's very capable of making defenders miss in the open field, breaking tackles, and fighting through contact to make the necessary plays for his team. He's an excellent route runner for tight end that run the whole route tree with finesse, fluidity, and quickness. He creates great separation at the top of his routes, often making him and easy target for his target. He's one of the most versatile prospects in this draft with snaps with his hand in the dirt, in the slot, at both X and Y receiver, he's even lined at fullback and halfback and Coastal Carolina even had him motioning on several plays as he was truly the teams best athlete and offensive weapon without a close second. He's very capable of going vertical to come down with jump balls and mossing defenders in the red zone, something he did quite a bit for the Chanticleers. He's a very good blocker for a man his size as he comes at defenders with low pad level and aggression and while he's beating up primarily on corners and linebackers in the open field mostly, his effort and toughness are highly admirable qualities in an NFL player. He's a high football IQ player on the field that's great about not causing penalties or being out of position. By all accounts he's a highly intelligent human being that coaches aren't going to have to worry about him off the field.

Coastal Carolina plays in the Sun Belt which is full of sub par football teams that rarely make college football rankings which Isaiah Likely beat up on defenders below his weight call. He doesn't bring the biggest wing span to the position and he'll need semi-accurate passes if he wants to have a chance at the football. He's light in his frame at 240 lbs. and adding some weight, maybe more muscle to his frame might be needed for the NFL, which could cost him some speed and fluidity that has put him on the map. He played more of an H-Back role in college with very little in-line snaps with his hand in the dirt, unless it's a run play, and may need to team to see past what a traditional tight end looks like in order to use him effectively.

Isaiah Likely could be a dangerous weapon for the right offensive coach in the NFL with his rare athleticism and playmaking ability and if he has a great combine, impresses in workouts, and does well in interviews it wouldn't shock me to see him get taken in the top 50. I emphasize that he needs to go to the right offensive system because they're are few teams in the NFL that I believe know how to use him effectively. He's a boom-or-bust prospect in this draft and if he booms for a team in the NFL, he could be a special player.