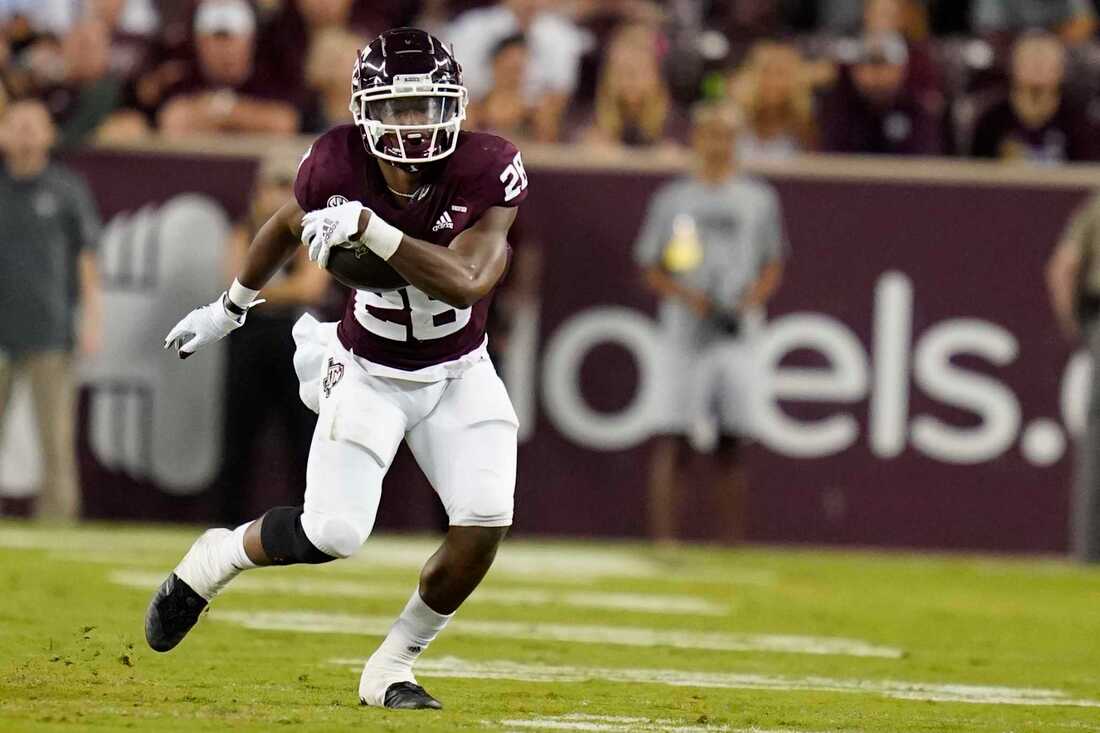 Photo by Sam Craft-Associated Press
The best running back in the SEC, Isaiah Spiller's consistent production and tough running style make him an enticing running back prospect in the 2022 NFL draft. At 6' and 215 lbs., Spiller brings good power, great balance, and excellent athleticism. Isaiah Spiller has some of the best contact balance in the entire draft as he made bouncing off of tackles and big hits a consistent theme when he ran with the football. He's a powerful running back primarily and he can bring the pain when he ducks his shoulders to run over defenders, often leaving dents in helmets and violent sound bites from the field. He possesses very good ball carrier vision both in between the tackles with his ability to find holes opening and closing and having enough quickness and agility to weave through traffic in the trenches. He trusts his eyes as a runner and rarely deviates from the plan as a runner. He can make people miss in the phone booth and when he sees some daylight in front of him, he can plant his foot and get to top speed quickly. He has a very powerful lower half that can be a nightmare to tackle as he just keeps churning and bulling his way free. He's very effective as an outside runner as he can turn the corner and get up field quickly. He has a very good jump cut that he times very well and what's more remarkable is that he doesn't lose any speed when he initiates it. As a receiver, Spiller flashes good hands and a decent understanding of how get open out of the backfield when his quarterback is in trouble and while he's certainly not going to moved around the field on offense like a chess piece, he's certainly capable of becoming a reliable receiving option on screens, wheels, and speed outs for his team. As a blocker he's very capable of delivering big shots in pass protection and blitz pickup. He was Texas A&M bell cow back since his freshman year which shows the amount of confidence they have in his ability. I liked his consistency in college as a running back and he never seemed to waver during the season and his production was relatively leveled out which brings home the point of his consistency. He's a tough competitor that can pick the necessary line to gain or die trying and NFL teams in need of a running back that set and keep the tempo for games should have this guy very high on their list.

I would say that benefited a great deal from the Texas A&M offensive line and Kenyon Green specifically considering he'll be a top 20 pick in the NFL draft and is considered by many to be the best run blocker in the NFL draft. Spiller doesn't possess the elite speed to break games open and needs a bit of a runway to reach top gear. He was hardly used as a receiving back in college and when he did catch they were mostly screens, shallow crosses, or just safety valve throws to prevent sacks. Not a great blocker from a technical standpoint as he's too willing to try and cut block blitzers rather than square up. He has trouble picking up blitzers in pass protection as well as and becoming more adept at recognizing incoming defenders correctly will benefit his career greatly. He has over 600 touches under his belt as a powerback and while that's not a crazy level of usage it's enough to make teams have to consider his longevity in the NFL. He doesn't try to avoid contact as much as he should and learning to make more evasive moves in the open and to save his energy for another down will need to be coached up in him. He has issues with holding onto the football on occasion likely due to his propensity to high contact style of running and will need to become more aware of holding onto the football.

Isaiah Spiller is a powerful back with room to grow as a prospect and he's fully capable of being a team's bell cow back to ensure that an offense remains consistent. He's been a staple for the Texas A&M offense since he stepped on campus and while that does mean he took on more carries than some other running backs in this draft, 600 touches isn't a killer amount. He'll need to temper his willingness to find contact as a running back and polish up his game but his ability to be a tone setter on offense is something teams crave in the NFL.