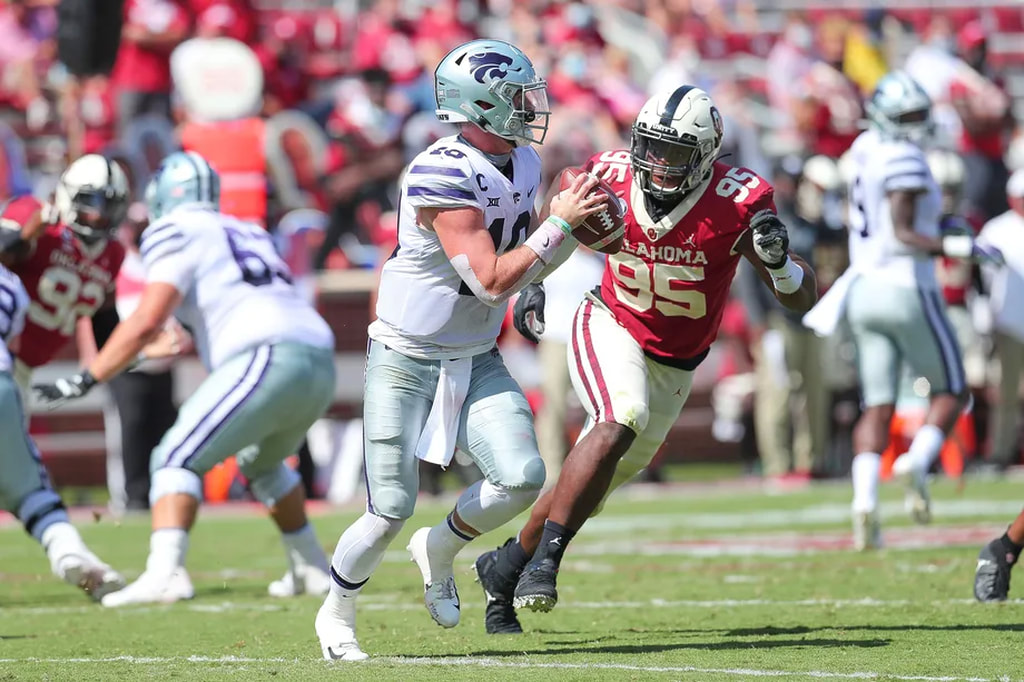 Photo by David Stacy-Icon Sportswire via Getty Images
Oklahoma had one of the best defenses they have had in years in 2021 and Isaiah Thomas was a key cog in their front seven last season. At 6'5" and 266 lbs., with good athleticism, great power, and pass rush technique. Isaiah Thomas is an edge built to go forward to make plays and he certainly showed this ability during his time in Oklahoma. He comes off the line with good pad level and does a nice job punching with power off the line of scrimmage to create separation and momentum. He has heavy hands behind his punch and is precise and accurate with getting his hands into his opponents chest to initiate moves and control his rush. He has a very potent bull rush that is mode easy by his length, early pad level off the line, and powerful punch that has helped him collapse the edge a bit to either force the quarterback out of the pocket or get the sack himself. He has a very powerful swim move that is accurately and effectively used when his opposing lineman is off balance a bit off the line and can get into the backfield quickly once initiated. He also possesses a potent and powerful push-pull that has been made effective after his punch off the line and it allowed him to consistently make his presence known in the opposing backfield when initiated successfully. When he makes contact with the quarterback he often makes it count by drilling them into the turf or clubbing the throwing to cause a fumble which he had great success doing in 2021. He's a violent hand fighter that will club and swipe his way free and will wear down his opposing lineman throughout a game with his physical play. In the run game is where Thomas has made his money because he's very stout on the edge against the rush. When all else fails in his rush, he's great at disrupting throwing lanes by getting his arms up to bat down passes which he did successfully quite a bit. He has an immensely powerful base for a defensive end prospect and rarely did he find himself getting driven off the line or blocked out of the play. He holds his ground with immense tenacity and aggression and has forced many runs to his side of the line to bounce outside for his linebackers to feast on. He brings excellent versatility to the defensive line as he's taken snaps both inside and outside and while I think he's strictly a defensive end his snaps in the interior are an intriguing aspect of his game. He's been the better man on many goal line situations with his relentlessness to hold his ground in the run game and can be a reliable run stuffer for an NFL team. He's a great competitor and tough as nails player in the front seven and teams in need of a defensive end that can bring tenacity and physicality to a squad.

Isaiah Thomas has a tendency to bite on most play fakes, boot legs, or read-options targeted at him and he'll need to become much more patient in his style of play to find success in the NFL. He rarely wins with quickness and agility and struggles to deal with offensive tackles that can overwhelm him with athleticism. His ability to change direction quickly and efficiently is highly questionable and I can't see him playing any position outside of 4-3 defensive end. He can get caught in the wash of the run game on occasion with his lacking agility and needs to become better at creating and maintaining separation to work the line of scrimmage. His pads tend to rise when he rushes up field and having more consistency with keeping his pads below his opposing lineman's is crucial to his career. His footwork needs considerable work as there are too many wasted steps in his rush up field and he'll need to be more precise with his movements in the pros. He's not a flexible edge rusher prospect and rarely has challenged offensive lineman outside with lacking ability to bend the edge. His get-off can be late and at times lackluster off the line and I am unaware if it's because of his inability to be explosive or if he's always anticipating the rush which was his primary role in 2021. His counter rush game needs work because too often when his first rush move fails he gets stuck hand fighting with his opponent and has a way of escaping outside of a spin move when it's too late. Playing next to Perrion Winfrey and Nik Bonitto opened up some lanes for him to make plays and it will be interesting to see how he performs without two stud defenders commanding significant attention. Not a lot of pursuit speed at times in the run game and can take questionable angles on tackles. He was arrested in 2021 for on suspicion of driving while impaired and because of an outstanding warrant for failure to appear on petty larceny charges which could scare off teams worrying about character issues.

Isaiah Thomas is one of those rare defensive ends that relishes the dirty work in the trenches and if teams believe him to be a dude that made a mistake off the field and not a dude that makes mistakes off the field, he could get a phone call on Day 2 or 3 of the draft. He's not going to change life for a team off the edge in the NFL but he'll help the rest of your defense make an impact. He could be a coaches favorite prospect towards the end of Day 2 in the draft and if he gets put in the right system, he could be a key contributor early in his career.