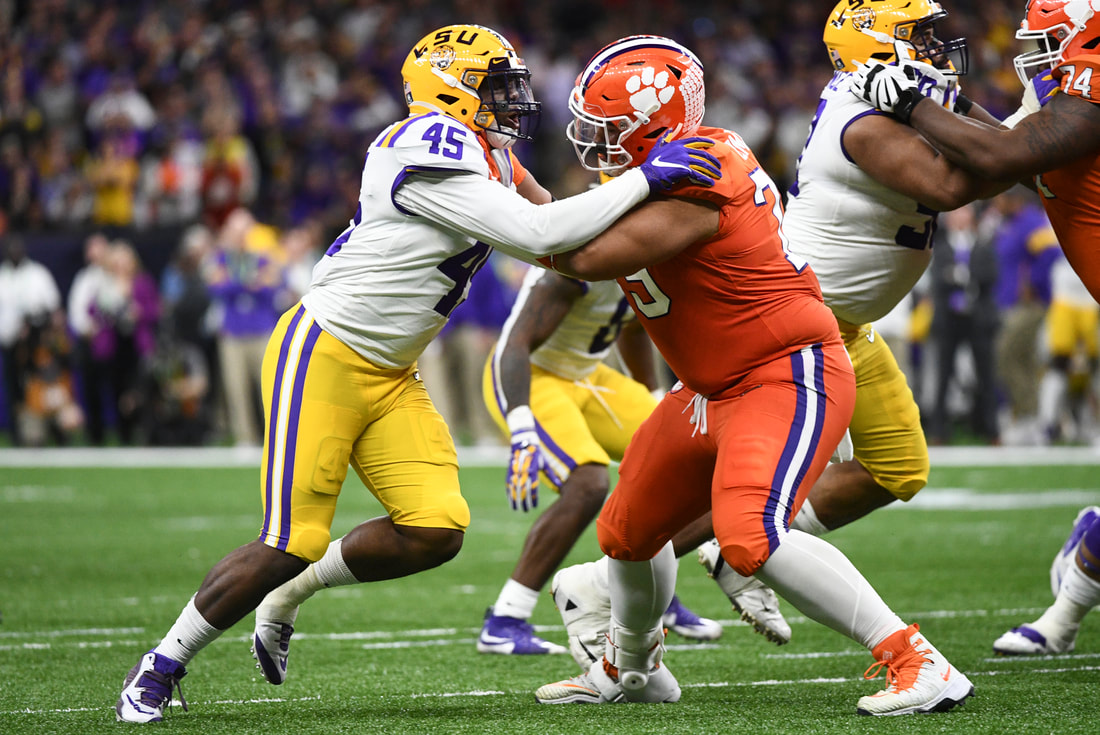 Jackson Carman has been Clemson's most underrated player and has emerged as one of the most underrated offensive line prospects in this draft. He's a mountain of a man at 6'5'' and 345 lbs. with immense power and surprising mobility for a man his size. His upper body strength will likely rank among the top 3 in the combine and is going to give NFL players fits if they try to out muscle him. He has long arms and vise grips for hands and when he's able to grab his opponent with them it's always a win for him. He's meaner than an injured mongoose and absolutely relishes plant defenders into the turf when he has the chance to. He does a good job of keeping his opponents out of his chest and thrashing them off of him if they get close. He's a good hand fighter that uses an aggressive chop to knock his opponents arms off him. He has a punch that could knock a bear off its feet and he uses it well. He possesses good mobility in his feet that allow him to mirror most college defenders off the snap. He has good balance in his feet and rarely is knocked off kilter. He does a good job of riding his defender out of the pocket as they bend the edge on him. He does a good job of picking up stunts and twists that come his way and can effectively neutralize them if he picks them up early.  He's a monster in the run game and is a key reason for why Travis Etienne has had so much success running through the left side of the line. He's a mauler and a brawler as a run blocker and has shown little difficulty coming off the line and driving his opponent backwards. He gets good leverage in the run game and his massive 345 lbs. frame does the rest. Rarely, if ever, is stood up or halted at the line and makes quick work of defensive ends that try to hold the edge. Does a nice job of turning his opponent out of the gap and giving the running back some daylight to run to. He's a monster in the second level of a defense when he can reach it with his sheer power and size as well as his decision making when blocking.

While he possesses good mobility for a big guy, he still has trouble with speed rushers and defensive ends that can pair good technique along with their athletic ability. He can get caught leaner forward when blocking his guy on the edge and can find himself leaving his inside gap open for spin moves and counters. He was absolutely dominated by 2019 #2 overall pick Chase Young when he played him and it will be interesting to see how performs against a similar prospect in terms of talent. He can struggle at times blocking the second level of a defense if linebackers and safeties are athletic enough to get by him. He can at times look for the kill in pass protection rather than focusing on the play and it can lead to blitzers getting through.

​He's going to be a menacing enforcer type on an NFL team's offensive line and will be a scary presence if a defender takes a shot at his quarterback. He's done a great job of keeping quarterback prospect Trevor Lawrence clean in the pocket and playing bouncer to any defender trying to get after his guy.