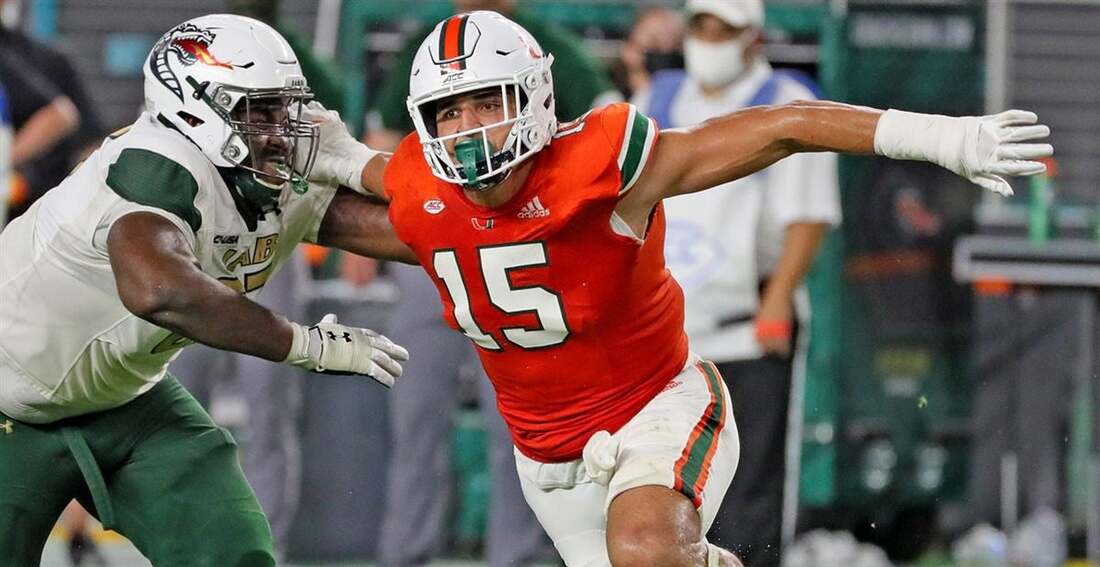 Jaelen Phillips went from a potential bust as a recruit to one of the best pass rushers in the ACC in 2020 and will look to make his mark in 2021. He brings prototypical size as a pass rusher at 6'5" and 265 lbs. with long arms and a thick powerful frame. He can play with his hand in the dirt or from a stand up position and he's extremely effective at both. He possesses exceptional strength in his torso and arms and is an effective bull rusher when he gets the better pad level. He's an explosive edge rusher off the line and does a great job of maneuvering through traffic and making play in the back field. He's very agile for a defensive lineman his size and has shown an ability to stop and redirect on a dime when giving chase. His strong hands make him a very good tackler allowing him to latch and bring down with ease. He showed in 2020 a very high football IQ as he does a very good job of staying focused and patient and allowing plays to develop a bit. as well as rarely, if ever, falling for sweeps, read-options, or play action. He possesses much better pass rush technique than you would think given his lack of playing time until 2020 and he possesses numerous moves such as a cross chop, a rip and dip move, and very quick swim move. He possesses enough flexibility in his hips to bend the edge and give chase to the quarterback. He's a very good run defender who does a great job of holding his edge and forcing running backs to bounce outside. He's very good at defending the read-option play by holding his ground and forcing the opposing quarterback to think twice about taking off. He was a consistent player in terms of production in 2020 who only got more effective as the year went on.

He doesn't consistently play with good pad level when coming off the edge, especially from the stand-up position, and has found himself on too many occasions fighting to regain his leverage off the snap. He's a work in progress as a hand fighter and has a ways to go as a counter rusher with too many plays that are just one and done due to a miss timed punch or swim move. He has only had one year as a full time starter and as impressive as he was, it would have benefited him a great deal to stay for another year. He played alongside another talented pass rusher in Quincy Roche who commanded much more attention from offenses due to his past success. He had to transfer from UCLA due to some medical issues involving concussions and at one point planned on retiring from football before finding himself donning the Canes uniform. Not much of a factor in coverage but has the necessary athleticism to make plays in this aspect of his position.

Jaelan Phillips' story is a tremendous one with plenty of ups and downs and I would be shocked to see his tale not mentioned throughout the draft process. If he can continue to sharpen technique and learn some counter rush moves he'll be a menacing pass rusher. If he can get paired with a coach that runs a hybrid scheme, he'll be at his most effective.