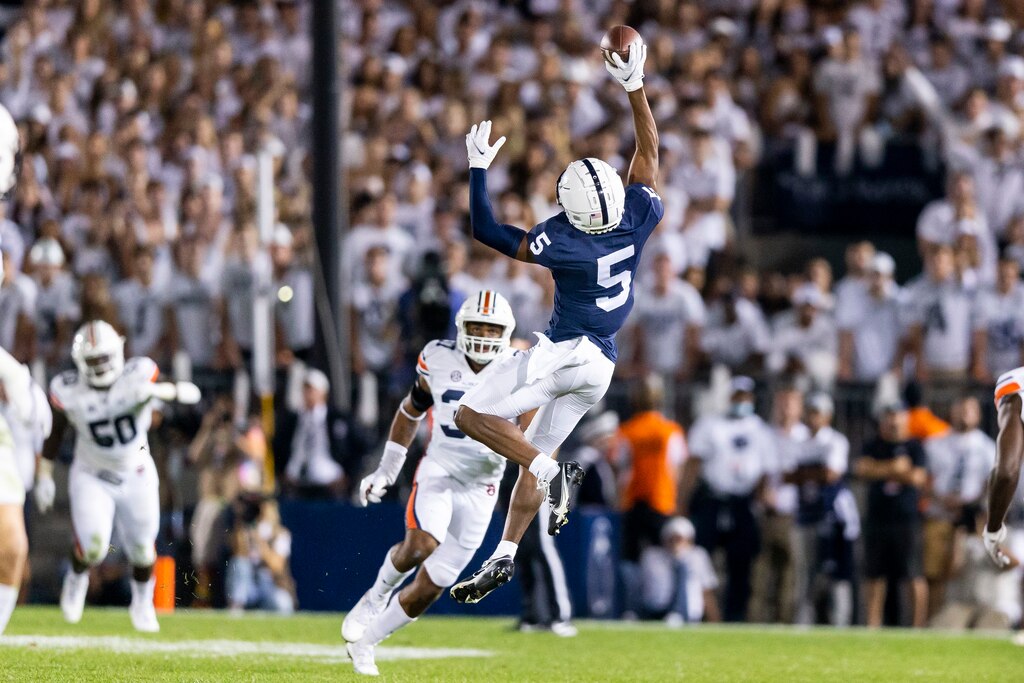 Photo by Joe Hermitt-Pennlive.com
Penn State has been a factory for deep threats the past few seasons with their propensity to attract freakish athletes and Jahan Dotson looks to be the best receiver prospect to come out of the program in a very long time. At 5'11" and 185 lbs., Jahan Dotson brings excellent athleticism, rare ball skills, and great route-running. Dotson has very good speed with excellent agility which makes him a match up nightmare for bigger corners that can stay in front of him. His time spent track and field has given him that extra gear when going deep to scorch his defenders and get in front of the pass. Jahan Dotson might have the best hands in this draft regardless of position because he possesses huge hands for his size that appear to have excellent grip strength as well as extreme confidence in their ability to snag passes either with two hands or one. He's a highly polished route-runner that plays with clear nuance and confidence in his ability to create separation at the top of his routes. He has a large route tree to go along with his polished game and quarterbacks and offensive coordinators won't have to do much scheming to get him open. He can be a nightmare in the open field with his ability to make defenders miss as well as find gaps in a defense with his ball carrier vision. He possesses a very high football IQ especially in crunch time as he has great awareness of the line to gain and knows how to get himself open to pick it up. Prepare for takeoff on contested catches with Dotson because he can fly with the best of them and he proved at Penn State that despite his size he brings enough competitiveness and strength in his hands to reel in passes and hold on through contact way up in the stratosphere. He's a very versatile receiver prospect with Penn State's usage outside, in the slot, on reverses and trick plays, as well as in the punt return game where he averaged 13.5 yards per with a touchdown on his resume. He's had to deal with a few quarterback changes in his college career and his ability to still produce with limited wavelength with said passes only magnifies how good he is from a technical standpoint. I love receivers that produce at a high level on a run based offense which is what Penn State ran and when the Nittany Lions needed a catch to keep a game alive or put points on the board, Dotson was the man they called upon to deliver. He's a voracious competitor on the field whose work ethic and film study shows up on the field.

He's a skinny receiver that doesn't bring much in the way of size to the position and while he's proven to be effective in the open field making defenders miss and slashing through defenses, NFL players are going to be able to tackle him and I fear for his durability. I would like to see him try and fight another day when he's near the sideline as he looks to try and score big on every touchdown. Press coverage has been his enemy at Penn State with his lack of strength in his frame and he'll need to become more efficient at separating from defensive backs that put the clamps on him. Not a receiver that I would be running over the middle with his lack of mass.

Dotson was an early riser in the college football season considering his somewhat limited targets this season and it shows a high level of skill and consistency at the position. Although his size worries me a bit, there are too many successful NFL players with a similar build that have gone on to become exceptional at the receiver position. His highlight reel catches and plays to bring images of Odell Beckham in his rookie year and while I am not comparing the too in terms of NFL production, Dotson should be a regular on NFL highlight reels in 2022. His skill set, ball skills, athleticism, and versatility make him a target for all 32 teams in the NFL draft and he possesses one of the higher floors among the receivers in this draft. I think he makes an impact in rookie year and could potentially be a on pro bowl roster early in his career.