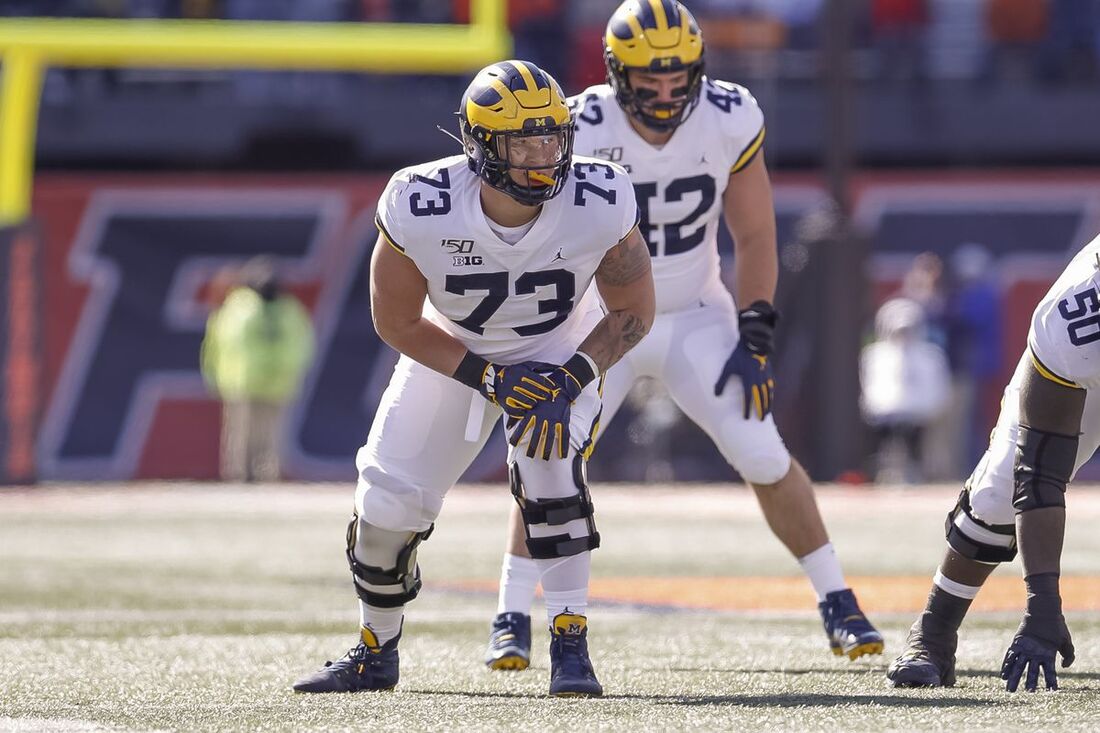 Jalen Mayfield was one of the best players on the Wolverine offense last year and should gain a lot of eyes from scouts if he continues his dominant play. Playing right tackle for the Wolverines, he shows great promise as a reliable offensive tackle in pass protection with his prototypical offensive tackle size at 6'5" and 320 lbs. with long arms and a well built frame. He does a good job of keeping rushers out his chest by properly utilizing his length and good hand fighting technique. He shows impressive athleticism on tape and will be a guy to keep an eye on at the combine. He reacts to stunts and twists very well and has shown the wherewithal to neutralize them. He's got good balance in his feet and flexibility in his hips to counter a defensive lineman's bull rush redirect them. Has a nice punch that can stun a defender for a second and allow him a little time to reset. Good power in his upper body to drive defenders off the line and create a running lane. He has risen up to the challenge against the top defensive lines in college football and is going to earn a lot of praise from scouts for his effort. Does a nice job of turning defenders out of a play in the running game and allowing a clean hole for a back to burst through. He's got powerful hands that can be like bear traps if he gets a defender's chest. He's got an immensely powerful base that is going to aid him well when creating holes in short yardage scenarios.

He doesn't play with great leverage for a tackle and it can get him in trouble against bigger ends that utilize length and power over speed and agility. He's got slow hands when hand fighting defenders and it can get him in trouble against more technically sound pass rushers. Struggles against the 3-4 ends in one-on-one scenarios as their power, and at times their length, can be too much for him. For all his athletic ability offers him he still seems to have trouble blocking speed rushers and has been eaten alive by some of the elite athletes of college football.  His bad footwork gets him into trouble if they get the jump on him and try to bend the edge on him. Struggles with counter moves and can leave his inside gap open for attack.

​He's got a high ceiling for an offensive tackle prospect but he will need to improve his technique a great deal if he wishes to reach it in his NFL career. If he can work his ability to counter speed rushers, he should find himself having a prosperous NFL career. I fully expect him to compete for a starting offensive tackle job early and should win the job by the midway point in the season.