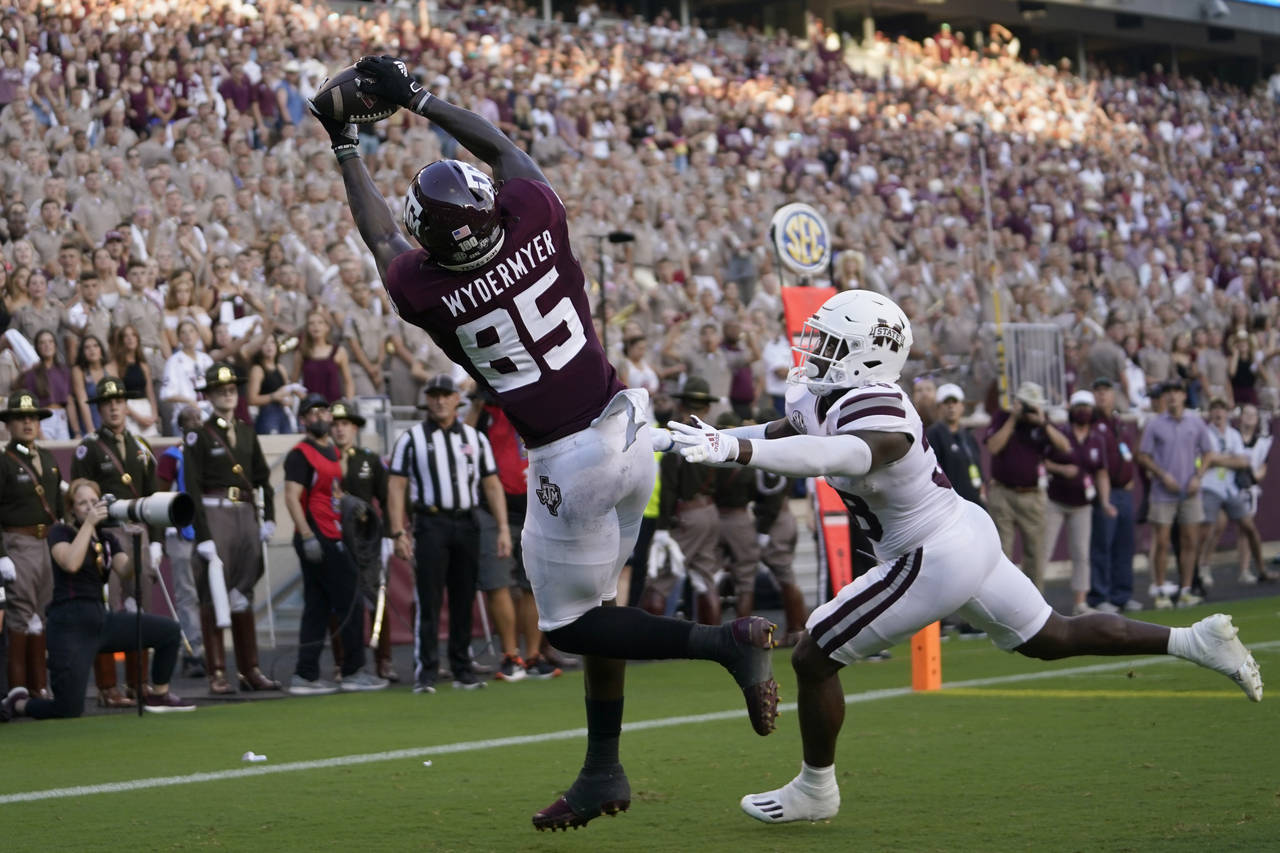 Photo by Sam Craft-Associated Press
Jalen Wydermyer is regarded as the best tight end prospect in this draft after two very good seasons for the Aggies as well as physical traits and intangibles that give him one of the highest ceilings in the draft among the tight ends available. At 6'5" and 265 lbs., Wydermyer brings elite size, exceptional athleticism, and excellent ball skills. He's a matchup nightmare for defenders all over the field and Texas A&M did a great job of using his versatility to their advantage. The Aggies lined him in-line, in the slot, and out-wide at both X and Y receiver and he has proven to be a difficult man for defensive coordinators to game plan for. He has exceptional ball skills even among tight ends with his huge wingspan and excellent timing when jumping up for passes. He's excellent at finding holes in the defense to sit and make quick catches as well as running vertically and at times burning defenders, often linebackers, with his sneaky speed. He can run the route-tree and possesses more than enough quickness and agility in his huge athletic to run them all very well. He creates great separation down field which is why he had so many open looks and YAC plays in college. He high points the ball very well and has excellent hands to not catch it but keep it in his clutches on contested catches or when he's hit hard. He's a very good 50/50 ball guy and often when the Aggies needed to make a play either to move the sticks or put six on the board, Jalen Wydermyer was their top choice. When he has room to make a play in the open field his fluid athleticism and big play ability come to fruition as he can make defenders miss and play through contact, a trait of his that teams are clamoring to find in tight ends. He's at his best in the red zone or in short yardage situations where use his size like a basketball center and box out his man and come away with the catch. He's mossed many safeties and cornerbacks in his career for touchdowns just by big-bothering defenders without leaping. Had over 14 touchdowns in 3 years for the Aggies offense with most coming against SEC defenses, showing his ability to make plays against the best prospects college has to offer. He displays a good football IQ with his versatility and ability to create separation and teams with creative offensive minds are going to love him when it comes to creating mismatches. He's a tough blocker who will take on any defender whether it's a cornerback in the open field or blocking a defensive end on the line and his high motor and effort can be seen here as he plays through and after the whistle.

He's not a polished or explosive route-runner which has often hindered his production and targets in college. He has issues as a blocker, mainly at the point of attack as he doesn't try to run over or pancake defenders but rather simply tries to block them out of the play. He struggles to maintain pad level when driving defenders off the ball and doesn't play with the aggressiveness needed to thrive as blocker. Used quite a bit as a vertical threat for Texas A&M which could be an issue for teams that want him to master the route-tree as this could give an insight into his struggles as route-runner.

I felt Texas A&M's quarterbacks over the years, run-based offense, and non-creative scheming of him in the passing game hindered his production and ability but if you watch his tape you see prospects making lemonade out of the lemons given to him. He'll need to play with more aggression and polish his route-running a bit but he has all the tools needed to make an impact in the NFL. He possesses a very high ceiling with pro bowl potential as a prospect and with the right quarterback throwing him passes he could reach his ceiling very quickly.