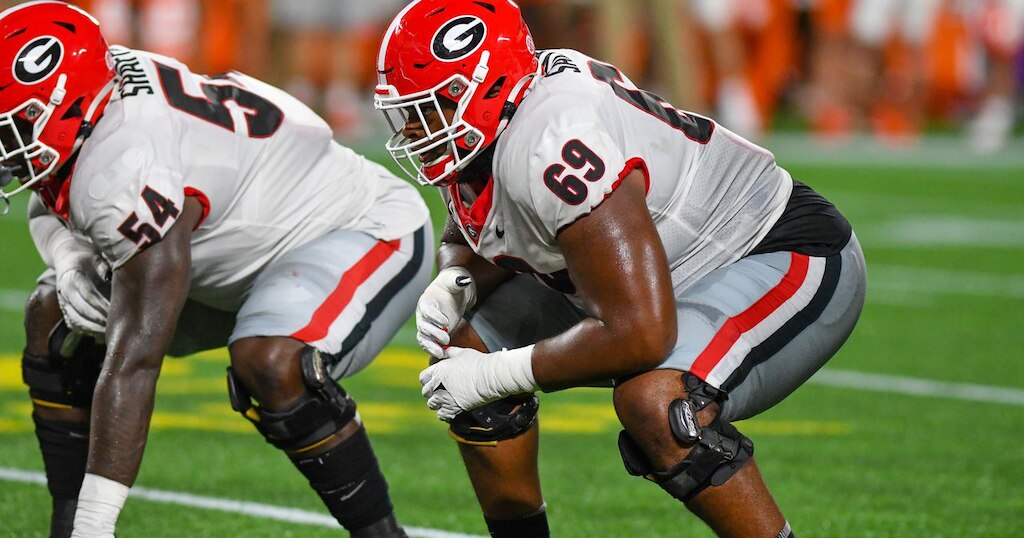 Photo by Rob Davis-dawgnation.com
The Georgia Bulldogs have been notorious for their monstrous defensive play in 2021 but the play of the offensive line for Georgia can't be ignored, especially the play of Jamaree Salyer. At 6''4" and 325 lbs., brings excellent versatility, athleticism and power to the offensive line. He's the most versatile offensive lineman in the draft with snaps at every position you can play on the line however his likely home in the NFL is guard until you need him somewhere else as his ability to add depth to the offensive line is his best trait. In pass protection, when he's playing tackle you see a player who is supremely confident in his athleticism on the end and has done a remarkable job of mirror edge rushers trying to outrun his outside shoulder. He has excellent agility and quickness in his lower half as well as great footwork which has helped him at the tackle position. He has very good power in his upper half and he has excellent punching power. He has great timing and accuracy with his punches and has sent players backwards when he hits it right. He's very good at keeping his inside gap protected from blitzers and defensive lineman. He's an excellent hand fighter partially due to his time playing on the outside against edge rushers and transitioning him onto the interior and facing slower defensive lineman on passing downs shouldn't be a problem. He does a great job of getting his hands into his opponents chest and has excellent grip strength to cinch chest pads and keep them from escaping. He's a violent hand fighter to go along with his technical prowess and does a great job of keeping his chest clean. Georgia is a run based offense and has a history of producing offensive lineman that can open holes in the trenches and Jamaree Salyer certainly fits that mold. He comes off the snap with good power and momentum and can be man-mover early if his opponent doesn't see it coming. He has more than enough athleticism to be a competent pulling guard and his previous experience with dealing with shifty players on the edge should help him maintain and sustain blocks in the second level of the defense. His punch is very powerful when in run defense and does a nice job of upending defenders and establishing better leverage when driving people out of the hole. He takes great angles when initiating blocks when running either down the line or in the second level of a defense. He does a very good job of turning people out of the hole on run plays and has enough power in his upper body to force lineman out against their will. He's played against some of the best defensive players in college football in the SEC and his transition into the NFL won't be as tough as other plays from different conferences. He possesses a very high football IQ with his knowledge of all three positions on the line and his ability to adapt and develop at each is also very impressive. He's a great competitor and team player and for coaches to choose him of all people on their line to learn every position shows the trust and confidence in his ability.

He's more of a jack of all trades and a master of none when it comes to his versatility and while that helps him a lot as a prospect, he's still relatively raw in his technique when it comes to playing guard full time. He lacks the desired length to play tackle in the NFL although his many reps at the position wouldn't discourage me from listing him as a backup in the NFL. He plays too high in his stance at the snaps and has struggled at times with dealing with defensive lineman that can outreach. His high pad level also hurts his ability to establish string anchor on bullrushes and on too many occasions found himself getting walked back into the pocket, forcing the quarterback to scramble. He can leave his chest a little vulnerable out of his stance with his tendency to keep his arms outside his frame and becoming more consistent at protecting his pads will need to happen for him to find success. He needs to add more power into his lower half if he's to transition to the interior of the offensive line and needs to do a better job of keeping his feet moving when driving defensive lineman off the ball.  His drive off the line can be inconsistent as well as when he plays with high pad level at the line and it just goes to show how much establishing proper leverage matters in the game of football. His punching power can be inconsistent as well with some ridiculous powerful shoves one play and average at best on the next which is likely due to his overall technical inconsistencies. His flexibility in his frame is questionable and it can leave him vulnerable to bull rushers getting the best of him. I would like to see him turn up the nastiness in the trenches more when finishing players because while he was able to finish edge rushers on occasion, defensive tackles are much nastier and whoever plays nastier in the trenches more often than not wins the most battles.

Jamaree Salyer's home in the NFL will be guard but his ability to play anywhere and be at least respectable is what sets him apart from the rest of the lineman in the draft class. He's one of those core players on a team that can keep a great season going by patching up whatever holes open and still find a starting spot on an offensive line. If he can clean up his technique such as his pad level and punching form, he could be a great pick in the draft for a team. He's at least a decent starter in the NFL and could be a season saving depth pick if someone goes down during an NFL season.