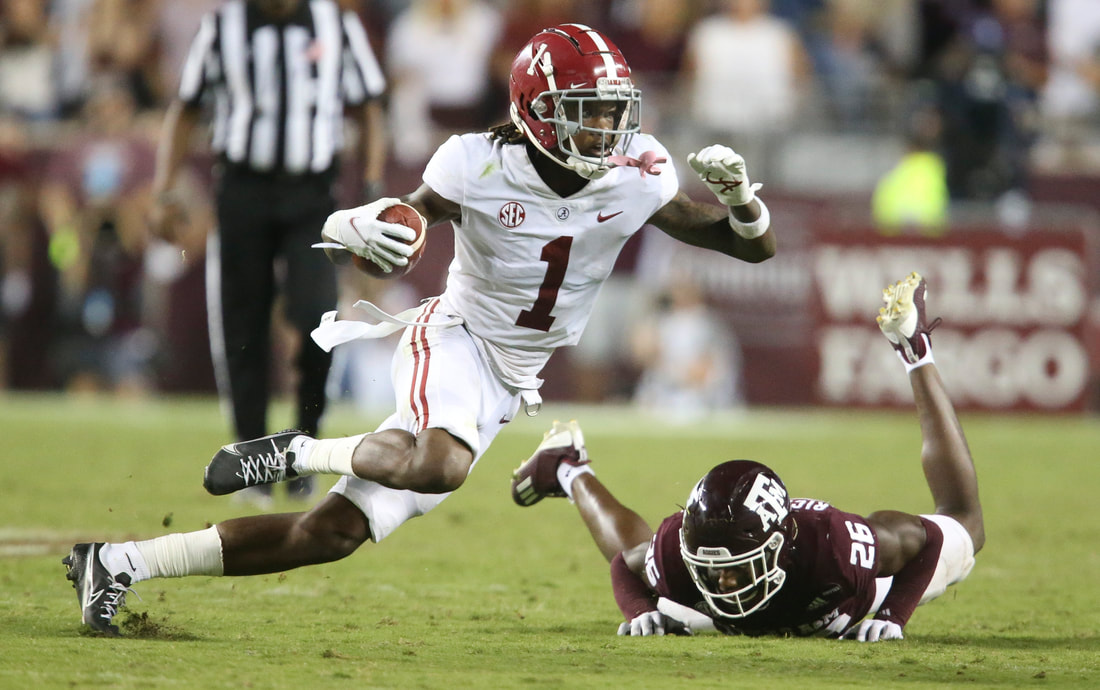 Photo by Gary Crosby Jr./USA Today Sports
Alabama has become the college football's preeminent wide receiver school for basically the last half decade and Jameson Williams certainly earned himself high praise for his phenomenal season in 2021. At 6'2" and 190 lbs., Williams brings elite speed, route-running, and play-making ability. I don't know who the receivers coach is at Alabama but every single receiver that comes out of that program is one of the best route runners in the draft as Williams made corners in single coverage look absolutely worthless at times with his elite route-running. He possesses a very large route-tree that he clearly has mastered in his one-year stint at Alabama and when Bryce Young got in trouble he looked for Williams on the field because he was often open. He possesses elite speed at the position and if he were able to run at the combine I wouldn't be shocked to see him near the top of the 40 yard dash times. He's extremely explosive out of his stance and can be a nightmare to deal on deep routes with his ability to stop and start in the blink of an eye and he's burned many of college football's best corners deep because of it. His separation at the top of his routes is ridiculous which is often why Bryce Young loved throwing in his direction. He has excellent hands that are attached to a surprisingly lengthy frame and he did a phenomenal job of plucking footballs out of the air for his quarterback and limiting body catches. He's effective at all three levels of the field and is a versatile receiver prospect with snaps outside, in the slot, and even was Alabama's premier return man for the last couple seasons which shows his playmaking ability and his ability to do it everywhere. He's one of the most dangerous receivers in the draft to give an open field to because he's proven to be an ankle-breaker and tough receiver to bring down if you don't get a good grip on him. He has incredible ball carrier vision when he gets the ball in his hands and he can find weaknesses in a defense when he's looking ahead. He's one of the best return men in the draft with his ability to get a head of steam quickly and find the open gaps in kickoff coverage and has two touchdowns in his career at Alabama to prove it. He's a tough runner as well as player and the team that drafts can be sure they are getting the money's worth out of him.

Jameson Williams was likely to be a guaranteed Day 1 selection until the Championship game where he sadly suffered a non-contact torn ACL which ended costing Alabama the game. Him suffering his knee injury likely cost him dearly in this draft because he won't be able to workouts with team, won't be able to show off that speed at the combine that made him a weapon on the field, he won't be ready for training camp, and he might even miss his rookie year all of which will be taken into consideration before NFL teams get a look at his knee to see the severity of it. Alabama's offense is a spread passing offense which allows Williams to take on single coverage often and slice through defenses with ease given how much space he often has to make plays. He's part of the most talented offense in college football with Heisman Trophy Winning quarterback Bryce Young, fellow potential high draft pick John Metchie, a beast at running back in Brian Robinson Jr., and an bruising offensive line lead by top NFL tackle prospect Evan Neal and while Williams is his own man on the field for the Crimson Tide it would be foolish to say that he didn't benefit some from the talent around him. Williams has a very slight frame that would be prone to injury in the NFL before his tragic knee injury and teams are going to have even more questions about his durability come draft day. He has a tendency to drop passes but not because of his hands but because he can look to make plays with football and lose concentration. I would like to see him add about 10-15 lbs. of muscle to his frame to better handle the rigors of the NFL. He's only had one year of starting experience and teams are going to have to decide whether he was a one-hit wonder at Alabama or if he was looked over by college teams and he really is that good. He can have trouble on contested catches if he has to try and fight for football with his lack of muscle mass and may need an accurate quarterback in the NFL to give him more of a chance. He can struggle to release on press coverage due to his lacking muscle mass. He's not afraid of contact which, while admirable and certainly a part of his success in college, is an issue considering his lack of mass and the brutality of the NFL. Not much of a factor in the run game as a blocker and will need to develop more in this regard once he gets to the NFL.

Jameson Williams would have been a top 20 selection in my opinion if he hadn't suffered that knee injury and it may cost him as a prospect. Torn ACL's are worrisome in the NFL but they aren't as big an issue as they used to be thanks to medical science and while it's certainly hard to see him bringing that same electric speed in the NFL, anything is possible for athletes like him and he should be a rebound from it. He's going to have to bulk up and may need to relinquish his return duties to limit the punishment he takes in the NFL. If he can do all that, he could be one of the best deep threats in the NFL and could find himself on a pro bowl roster at some point in his career.