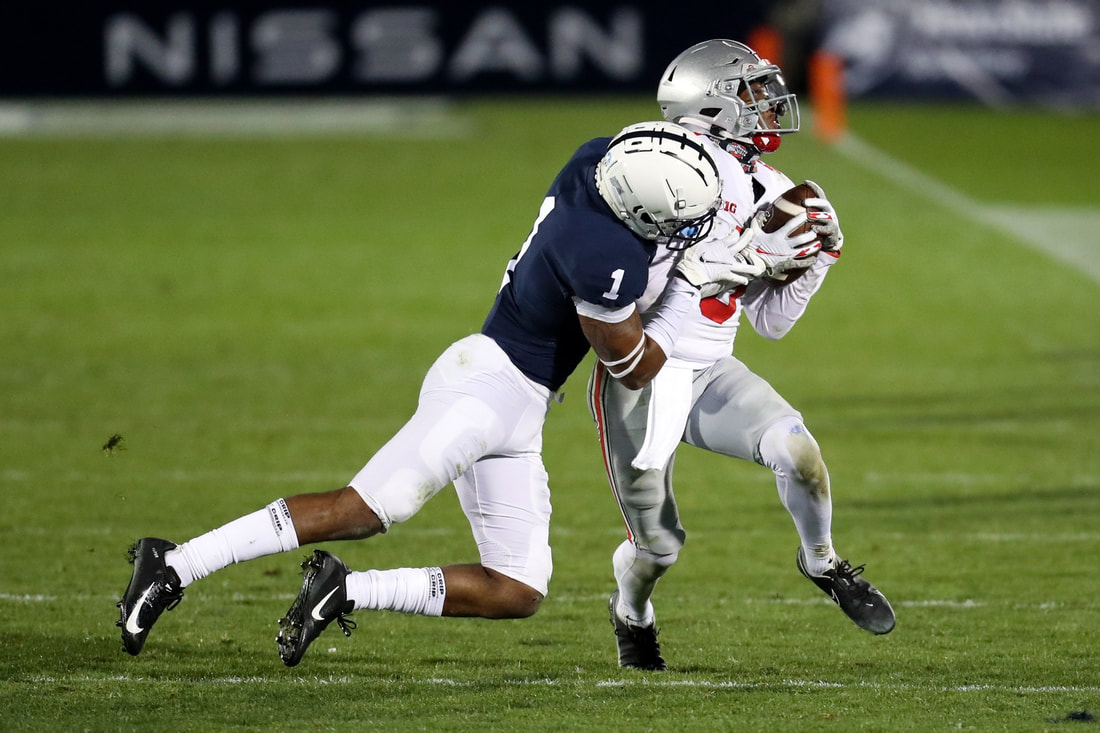 Photo by Matthew O'Haren-USA Today Sports
Penn State has produced some unreal athletes the last few years and safety Jaquan Brisker looks to be the next man for the Nittany Lions in the 2022 NFL draft. At 6'1'' and 205 lbs. Brisker brings freakish athleticism and ridiculous toughness in a brickhouse frame. A former JUCO product, Brisker has shown the ability to work relentlessly hard to achieve his goals and improve as a player and going from Junior College recruit to All-American Penn State safety to potential Day 1 selection is a major accomplishment in itself. Jaquan Brisker athleticism gives him excellent range, explosiveness, and agility and when in zone coverage all three attributes are easy to see. In zone coverage, Brisker often plays single high safety as Penn State likes to use their freakish athletes on defense in blitzing packages quite a bit and he has handled himself very well in the role. He does a great job of keeping his eyes on the quarterback, reading the play, and attacking where he wants to go with the football which often can lead to some big hits by him. His ridiculous athletic profile gives him impressive range, closing speed, and explosiveness and when the ball is thrown Brisker is usually not far away from it. His ability to run down passes and his potential to make plays from sideline-to-sideline appeared to scare quarterbacks and offensive coordinators in the BIG-10 and often didn't see many deep balls over the middle. He doesn't fall for look-offs of pump fakes very often and has good play recognition so as to not fall for boot legs or play action. You can tell he watches a lot of film from some of the plays he has made, check out his interception versus Wisconsin, and coaches won't have to worry about Brisker not putting in the hours outside of the field, showing his high football IQ and work ethic. When he contests catches, he does a nice job of trying to dislodge the football with his hand for more success rather than just going for the hit stick which helped boost his defended passes stat in 2021. In man coverage, Brisker has the size, athleticism, and power in his frame to handle tight ends one-on-one and enough quickness and agility to play against receivers as well and while hasn't been asked to do so for Penn State very much, he certainly wouldn't be overwhelmed if he had to. He has good ball skills and great hands when he has a chance to come down with the ball and has shown the ability to pick up yards after the catch. Jaquan Brisker is one of the most feared tacklers in the draft because he can wreck ball carriers at any given angle. He's an outstanding tackler with his impressive strength for his size and has textbook form when engaging, allowing him to bring down ball carriers on the spot. He's fearless when attacking the line of scrimmage and has been in some car crashes in the trenches that has seen ball carriers get blown up. He has ridiculous closing speed when pursuing ball carriers and has shown little with chasing them down. When he ducks his shoulder to hit stick receivers or running backs, he does a nice job of keeping his trajectory at the numbers to force potential fumbles and incompletions as well as avoid costly unnecessary roughness calls against him. He lives at the line of scrimmage when Penn State wants to blitz the back field and has proven to be a tremendous asset as an in the box safety. As a blitzer, he can make plays both off the edge and up the middle as his athleticism allows him to easily shoot gaps, weave through lineman, and burst into the backfield to make or disrupt the play. He can be trusted to play as an extra linebacker when stacking the line of scrimmage and his ability to dart into the backfield as an extra blitzer really helped Penn State in 2021. He's a high motor player that won't stop playing until after the whistle. Jaquan Brisker is a relentless competitor and worker who's going to leave it all after the game.

I wish Penn State used Brisker in more ways during his career because most of his snaps either have him lined up single high safety or in the box ready the blitz and wreak havoc and having more man coverage snaps under his belt would likely have rocketed his draft stock during the season. He doesn't attempt to rip the football out enough when making tackles and can take bad angles when making tackles occasionally. He has benefited from a ferocious front seven at Penn State in his two years of starting at safety with many defensive lineman and linebackers getting selected in the draft, Micah Parson and Jayson Oweh to name just a few, and often hasn't had to run around on the back end of the defense very long due to the pressure they created. Although nothing serious, he has dealt with injuries due to his style of play and while he hasn't missed any games because of it he may have to bulk up his frame a bit to make sure he has a more lengthy career.

JUCO athletes are some of my favorite prospects because coming from junior college to big Power 5 schools shows that the player puts in the work to meet his goals. Jaquan Brisker has all the tools necessary to be a great safety in the NFL with his athleticism, toughness, and work ethic but it's the unknown skills of his that could hold him back in the draft. If he can show in workouts that he can play man coverage and prove to coaches at the combine he's as athletically as advertised, I have no doubt in my mind he'll be a Day 1 draft choice and could be a potential pro bowl player in his career.