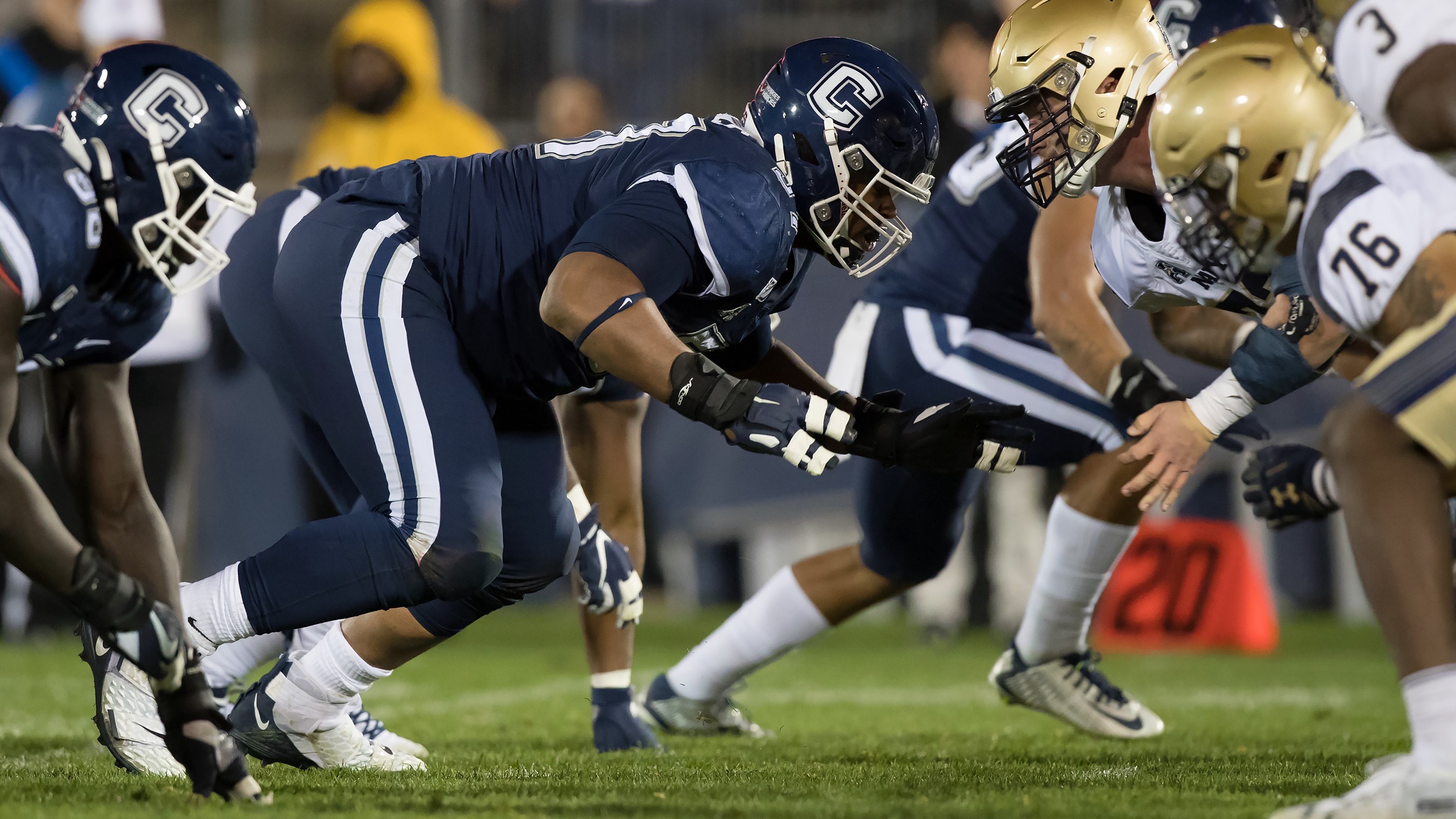 Photo by Stephen Slade-UConn Athletics
The UConn Huskies may have been terrible in 2021 but the lone bright spot on the roster was Travis Jones whose menacing presence in the middle of their line was hard to miss on tape. At 6'4" and 335 lbs., Jones brings immense size, phenomenal power throughout his frame, and surprising athleticism to become than just run-of-the-mill space eater. Travis Jones comes off the ball with low pads and tremendous power behind them that can knock most offensive line back a yard or two before they can recover fully. His punch off the line is very powerful and rock offensive lineman on there heels when he times it properly and uses it accurately. His extremely powerful frame can't be contained when he's single blocked and requires at least a double team from the offensive line to somewhat halt rush up field. As a pass rusher, his leg drive alone makes him a constant pocket collapser from the interior and if the quarterback takes his time in the pocket and doesn't get the ball quick enough you can be sure that Travis Jones will get to him. He's a very at keeping his pads clean from offensive lineman with violent swipes, clubs, and one-arm stabs that make trying to get a grip on his chest a very difficult task. He possesses an exceptional bull rush, even among nose guards, and can pass rush up the middle of an offensive I believe with that move alone. He has a very good push-pull move in the interior where powerful grip, immense power, and aggressive play all come together and make him very difficult defensive lineman to stay in front of. His sack production came from not just his ability to push interior offensive lineman into his quarterbacks lap but also with his impressive agility and quickness when he gets his shot on the quarterback as he shed blocks quickly and give chase to the quarterback. He has immensely powerful hands that allow him to make single-armed tackles with regularity and his ability shed blocks has proven to one of his best traits in the interior. His bones have been made as a run defender where his size, power, and malicious play make him a nightmare for run blockers to deal with. He's very good at planting his feet in the ground and establish an incredible anchor in his base to force runs to bounce outside and give his defenders a chance to make plays. He can hold his own against double teams in run defense and has shown to be very capable of shedding blockers and keeping with the play. Jones a great tackler and possesses a white motor that doesn't stop until he hears the whistle. He's been the team leader since he arrived and will be a phenomenal locker room presence in the NFL. He had to lose weight when getting the starting job at UConn and went from 360 lbs. to close to 330 lbs. in order to get on the field and he has maintained that weight effectively since reaching it.

HIs first step off the line is relatively average, even for his size, and is often having to fight through blocks from start to finish rather than being able to beat his man with natural strength and athleticism. He was tasked with being a run defender exclusively at UConn and doesn't possess many pass rush moves as a consequence. Most of his production as a pass rusher comes from pushing the pocket and keeping his eyes on the quarterback and disengaging once the quarterback is within range and doing a better job of shedding blocks and getting up field to get sacks will serve him well in his career. UConn doesn't play very many talented college football teams do to their FBS Independent conference status and while Travis Jones certainly was a handful in the middle of the trenches throughout the season, the talent he faced has to be taken into account. His size relegates him to interior line position with very little versatility outside of being a 1-tech in a 4-3 or a nose guard in a 3-4. His arm length is average for an interior defensive lineman could be an issue in the NFL but nose guards have made a for themselves with average arm length before.

Travis Jones could be a huge asset to a team that's in serious need of help in run defense because he certainly has the make up of an NFL nose guard or 1-tech that can eat blocks and give his guy clean blitz lanes to attack the backfield but if your expecting him to come and provide pass rush help in the interior early in his career you'll be disappointed. He's a work in progress as a pass rusher despite having the requisite pieces to become one and if paired with the right coach he could be a decent pass rusher in the middle. I think he could be a reliable starter in his career that has potential to be an every down lineman in his career.