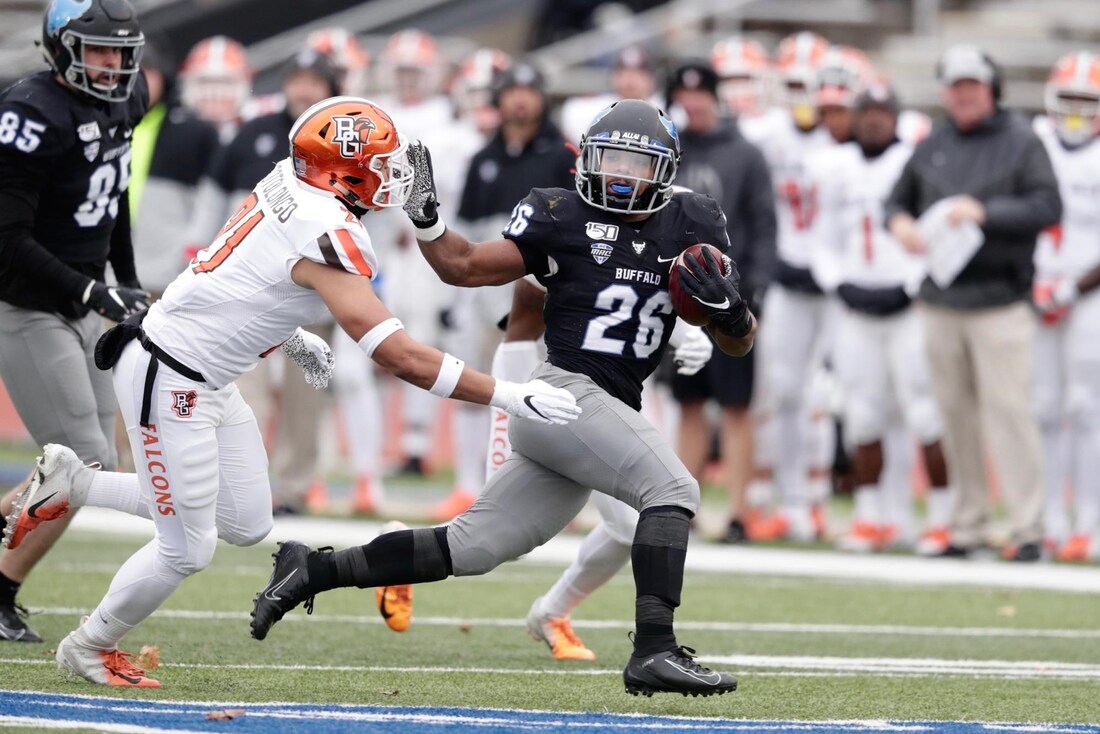 Jaret Patterson lit the MAC conference on fire with his two exceptional seasons and should find himself hearing his name called in April 2021. He's a short and compact running back at 5'9" and 200 lbs. with good athletic ability. He's a fantastic runner between the tackles where most of his damage is done to defenses. He's got exceptional quickness in his feet and can make plays in the phone booth better than most players in the draft. He can make guys miss in very short areas with a quick and effective juke move. He's got a good stiff arm for a shorter player that can leave defenders in the dust. He's got a good spin move that can shed tacklers and allow him to pick up more yards. He's got exceptional agility, even for his size, and can make defenders miss with ease. While not utilized much in the passing game, he clearly shows that he's capable of being an effective safety valve and threat on screen plays. Excellent ball carrier vision, especially running through the trenches, and always seems to pick the right hole to run through. He was the bell cow back for the Bulls and constantly faced 7-8 man boxes in college and still came out clean on the other side. He can be a nightmare in the open field with his agility and is easily one of the better running backs in college football when it comes to making defenders one-on-one. While he's not a back that's going to run players over, he will drop his pads and fight for extra yards. He had a 409 yard game against Kent State and 301 yard game against Ball State in 2020 which shows a rare level of dominance when he's hot.

He plays in the MAC conference which rarely, if ever, features top end talent and he has yet to face top competition in college football. His team played against Penn State in 2019, the only team that many would consider among the elite in college football, and came up short. He doesn't possess the speed necessary to outrun defenders, even in the MAC conference, and has shown to have difficulty out running defenders on pitch and stretch plays. Not a player that will run defenders over and if he gets caught by a defender, he doesn't possess enough space to break away. He can be susceptible to arm tackles and can have trouble when asked to cut back. Need to see more production in the passing game and I would like to see if he can maybe return punts and kicks.

​Jaret Patterson has made defenders look really bad in his first couple seasons for the Bulls and reminds me a lot of Chicago Bears running back Tarik Cohen. His ability to make players miss is probably going to translate into the NFL but he lacks the skill set and size to be a 3-down running back and will need at least a couple seasons to possibly compete for the starting job. If he can show up as a return specialist on an NFL team, he might find himself a home very quickly in the NFL.