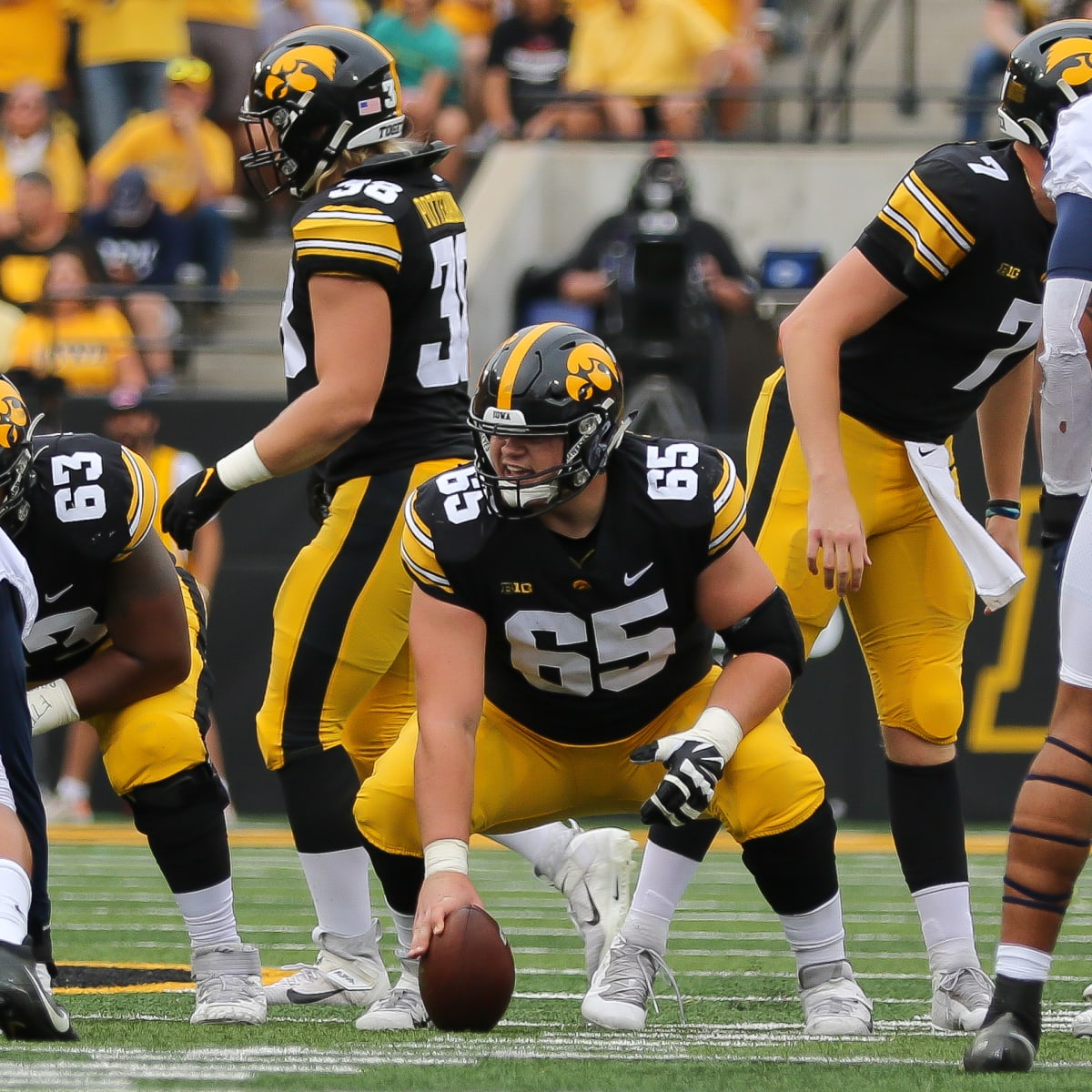 Photo by Rob Howe-hawkeyenation.com
The Center position  is one of the most undervalued positions in the NFL and Tyler Linderbaum is coming out of Iowa as one of the most complete Center prospects to come out of college football in a very long time and might be one of the most complete offensive players in the entire draft. At 6'3" and 290 lbs., brings elite technique, exceptional athleticism, outstanding football IQ. A former high school wrestler, Tyler Linderbaum possesses excellent power throughout his frame as well as exceptional balance in his lower half which allows him to take on contact and regain his footing quickly. He possesses rare football IQ, even among centers, and will be a phenomenal asset for quarterbacks at the line when it comes reading defenses, calling out blitzers, making calls for the quarterback at the line, and recognizing stunts and twists. Linderbaum possesses some of the best quickness and agility for a center that I have ever seen coming out of college which has helped him dominate both in the run and pass game for Iowa. He was originally recruited to play defensive lineman but transitioned to center during his freshman year and to see his development in just two full years at the position shows rare development speed for a draft prospect and I fully expect him to pick up the speed of the NFL very quickly. In pass protection, Linderbaum plays with phenomenal pad level at the snap and does a great job of halting rushes up the middle. His wrestling has given him absolute monkey wrenches for hands and when he clamps onto lineman, he doesn't let go. He's very quick out of his stance and displays excellent overall awareness in the middle by providing help to his guards and pop defensive lineman that try to break into the backfield on the inside. He's very aggressive in pass protection lined up against nose tackles or 1-techs and can be menace for lineman to deal with. He's a malicious hand fighter that brings both speed and power to his technique and he packs excellent power in his punches when getting into the lineman's chest pads. He possesses rare flexibility for an offensive lineman of his size and taking punches from lineman and having to bend his hips and readjust his positioning on bull rushes has been a non-issue for him. As a run blocker, Linderbaum is truly something special with his exceptional athleticism, powerful build, textbook technique, and malicious style of play all helped make Iowa's zone-run offense one of the most difficult to prepare for in college football. He comes out of his snap with low pad level, excellent leverage, and bad intentions and Iowa constantly ran up his gap on a majority of their runs. He's quick to grab onto a lineman's chest pads and does a phenomenal job of keeping them in front of them when driving them off the ball. He has very quick and powerful choppy steps when he's bull dozing defensive lineman which helps prevent them from getting their feet beneath them. He's a vicious finisher when gets a good angle on his opponent and his wrestling background helps to effectively and quickly topple bigger and more athletic defensive lineman by using phenomenal angles and overwhelming them early in his engagement. He brings the pain when making initial contact with defenders and has a litany of pancake blocks in his career to show it. He's an excellent player to have on double teams with his natural strength, athleticism, and aggressive play which allows him to not only help with combo blocks but he can also break off from lineman and make blocks in the second level to keep a run going.  He's shockingly fast and agile for a man his size and making blocks in the second level against linebackers and defensive backs is something that sets him apart from other interior lineman in the past with his ability not only to mirror them and accurate make contact with them but to also toss them out of the way with ease. He's a great lineman to have leading the way on blocks which is something he did quite a bit for Iowa on pulling plays and screen passes. He's a high motor, high effort, high energy player that plays with exceptional competitive fire.

I would like Linderbaum to gain more weight when heading into the NFL because while he clearly has shown that he's more than capable of handling his own at 290 lbs., NFL defensive lineman might capitalize on his size. He's so suited to play center due to his lack of arm length that I don't know if he has any positional flexibility and teams shouldn't draft him with the notion of moving him around the line.

The Iowa Hawkeyes have been one of the most underrated schools in the NFL when it comes to producing exceptional NFL line talent, Tristan Wirfs, George Kittle, T.J. Hockenson, Noah Fant, and Brandon Scherff to name a few, and Tyler Linderbaum looks to be the best out of all of them heading into the draft. His development at the center position with his limited time spent at the position is spectacular and NFL teams in the upcoming draft should hold him in high regard if he happens to be available for their pick. He's the best interior lineman to enter the draft since Quenton Nelson and I would be shocked to see him not have a similar impact on a team that Nelson did for the Colts. He possesses easily the highest floor in the draft among offensive players and is a plug-and-play pro bowl offensive lineman within his first two seasons in the NFL.​