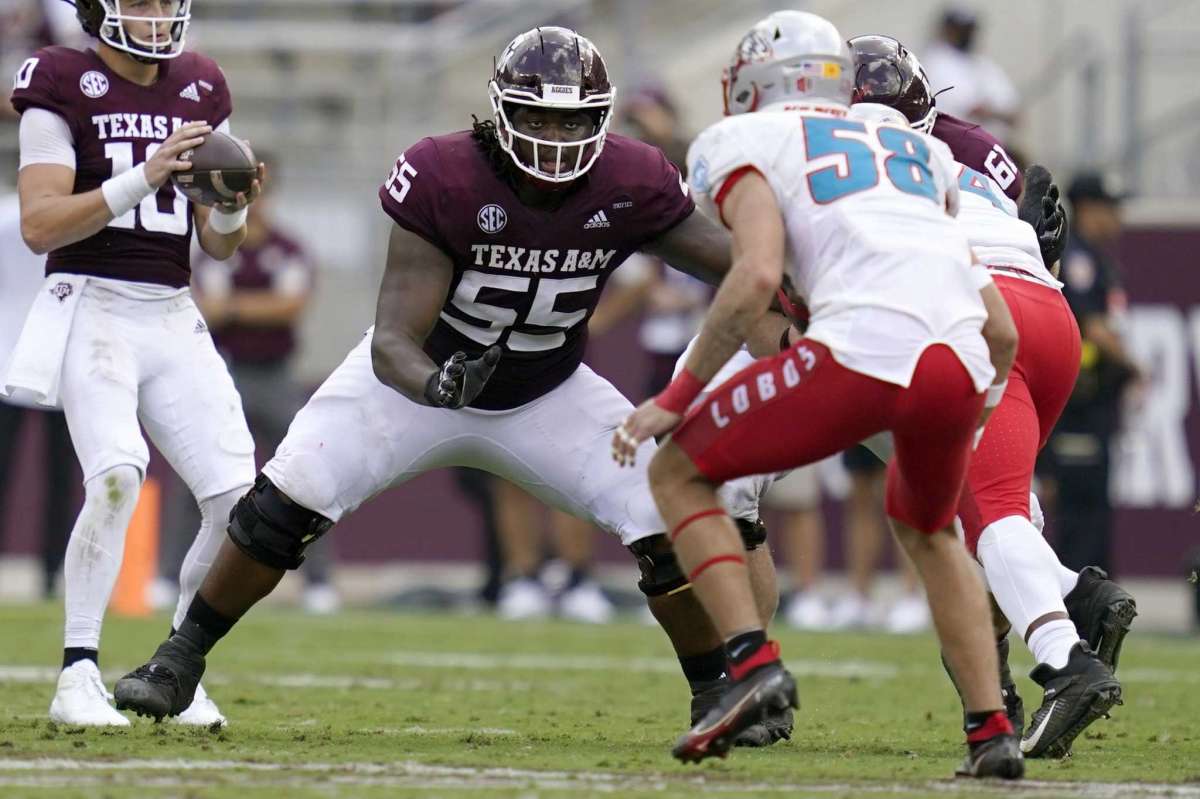 Photo by Sam Craft-Associated Press
Offensive guards rarely get the attention other positions get in the draft but Kenyon Green certainly has earned the hype over his career at Texas A&M. At 6'4" and 325 lbs., Green brings the desired size and length to the interior of the offensive line and rare athletic ability to match. He's built to bulldoze in the run game and he has plenty of highlights that show him doing just that. He possesses immense power in his upper and lower half of his body and when the Aggies run the ball, they run behind him. He comes off the ball with impressive explosion and power and he does an incredible job of keeping his pads very low, allowing to out-leverage his man on every play. He’s very quick footed and walks back his defender with ease. He does a nice job of shooting his hands into his opponents and he has the grip strength in his palms to keep his defender glued to him. He does a tremendous job of driving his man out of the hole and usually turns his defender out of the lane easily. He’s as mean as an ornery bull on the field in the run game and looks to topple and plant his opponent rather than just finishing them. As a pulling guard, he’s a wrecking of momentum and power once he turns upfield and makes first contact with defenders and usually is pancaking and running over defenders with ease. He gets to the second level of the defense with ease as he possesses impressive straight line speed for a man his size. He looks to annihilate linebackers and safeties in the 2nd level and more times than not he scares them out of the hole. Rarely needs help when asked to plow nose guards back and out of the lane and when asked to double team, he creates canals for his running to run through. In pass protection, you can really see the power his frame when defending bull rushes as nose guards and defensive tackles can’t upend him. He possesses a very strong anchor when he pops out of his stance and has great length in his arms to keep defensive lineman out of his chest. He has very active and aggressive hands and has one of the most powerful punches off the line in the draft. He has great awareness of his quarterback's location in the pocket and does a nice job of giving his quarterbacks escape routes up the middle if needed be. Not fooled by stunts or twists directed at him and has enough power and explosion in his frame to halt or even pancake defenders coming at him. He has played snaps at both guard and tackle in his college career and excelled at both positions which gives him plenty of versatility for teams with weak depth at the offensive line. He plays against the best defenses in college football in the SEC and consistently dominates against NFL talent every game. His aggressive mauler mentality and relentless blocking in both the run and pass game show his high motor and competitive fire and should earn plenty of fans among coaching staffs looking to add attitude and ruthlessness to their offensive lines.

His raw technique can be his downfall in the interior and while he has the mentality and athleticism to make up for his shortcomings in college, NFL defenders could potentially eat him alive if he doesn’t improve. One of his biggest issues coming out has been his inconsistency with his pad level because while he certainly comes out of his stance in the run game with low-pads and power too often in pass protection Green will pop straight out his stance which gives his opponent a much bigger target to attack his pads and can weaken his overall anchor against interior defensive lineman. He has average lateral agility for an offensive lineman and when asked to block against speed, either against edge rushers and blitzing linebackers, he can struggle to keep up and shut them down. He can play too far over his toes at times and can get caught lunging to block defenders which can cause him to occasionally miss his block against shifty and speedy defenders attacking him straight up. When pulling on run plays because he plays over his toes and lunges he can also miss blocks in the second level and leave cut back lanes for linebackers and safeties to make a play behind him. His aggression can at times get the best of him when making blocks as he can look for the pancake over the block which can lead to him missing his keys when getting to the second level.

Kenyon Green is one of the most aggressive offensive lineman in the draft and plays the position the way it’s supposed to be played, mean and nasty. If he can polish up his technique and reign in his aggression just a bit, a team will have a stalwart offensive guard for a decade and a potential early pro bowler on the line.