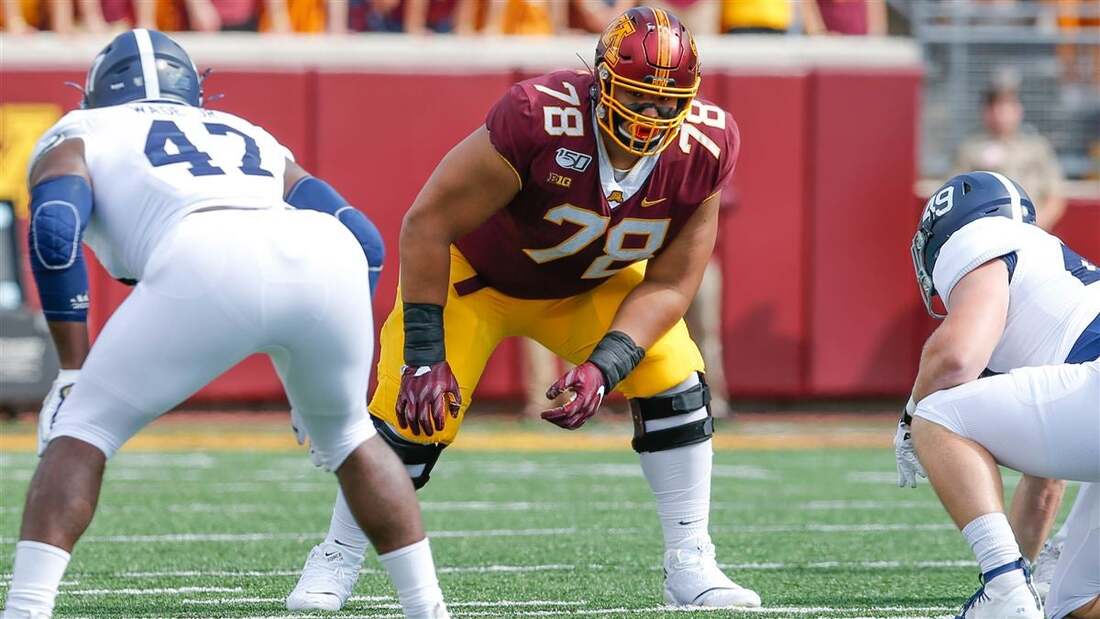 Photo by Dan Owen-247 Sports
There has never been a bigger NFL prospect than Daniel Faalele and that is saying something considering 2020 1st round pick Mehki Becton was 6'8" and 370 lbs. Daniel Faalele is a 6'9" and a whopping 385 lbs. gargantuan offensive tackle with unreal strength and equally unreal mobility for his size. He's easily the most intimidating offensive lineman in this draft just in terms of his size and mobility at first glance and has on occasion intimidated college football players because of it. In pass protection, comes out of his stance with great explosiveness and quickness in his lower half which allows him to ensure edge rushers can't take his outside shoulder too quickly. He utilizes his natural length effectively and never lets defensive lineman get the inside of his pads. He possesses one of the most powerful punches in the draft and if he gets a clean shot, defenders have been tossed like rag dolls when he connects. He has immense power in his hands and arms and when he gets ahold of chest and jersey, he will not let go. He has probably the best anchor in the draft given how big he is, how long his arms are, and massive and powerful his base is, and even some of the best NFL edge rushers and defensive lineman are going to fail to force this guy back into the quarterback the moment he plays a game. He's excellent at mirror edge rushers off the line as they simply can't get around his frame. He has completely eliminated power rushers from defenses and has developed a reputation among defensive coordinators when it comes to who they play on his side of the line as they always seem to avoid putting their power rusher on his side after about quarter of football. He's very good at riding speed rushers out of the pocket and can at times toss them off balance when he can't get enough force. He has a tremendous mean streak, even for an offensive lineman, and has on numerous occasions fallen on top of his man when he drives them into the ground. His hand fighting skills are very impressive for someone who's still learning the position with his ability to get into his opponents chest and not only keep his chest clean but also to violently shed grips off him. Minnesota is a pro style offense and even for all his prowess in pass protection, his ability as a run blocker is where he money is made as a prospect. He comes off the line like a locomotive and will blow up any and all defenders in his path. He wants to punish and maul defensive lineman at the snap and has often taken on multiple blocks in a short span to give his running back a very clean hole to run through. He does an excellent job of standing up his guy and turning them out of the rush lane of a defensive line as well as driving them completely out of the play. He finishes blocks very quickly when going forward and does a great job of moving onto the next block just as quickly to keep a run play going. He's going to be a option #1 in short yardage power run plays and I am not sure if he'll ever lose a battle. He has enough mobility to reach the 2nd level of a defense and block linebackers and defensive backs, or at least scare them out of the play. His punishing style of run blocking has a pattern wearing down edge rushers and defensive lineman quickly and a lot of Minnesota's big runs could be seen off his side of the field with his ability to make his opponents quit. He was formerly a Rugby player that gave football a try in high school and quickly gained notoriety and popularity among the top colleges in the country. And to see how fast he has picked up the sport not only shows his high football IQ but also his high overall IQ as well. He's a tough SOB given his experience playing Rugby and how violently he plays football and will be a welcomed addition to an NFL team in need of an enforcer like player. He plays with maximum effort and competitive spirit on the field and given how fast he's picked up the game and teams are going to be clamoring to draft him if he makes it into Day 2 of the draft.

His lack of experience and exposure to the game of football has made him a very raw prospect technically and any team that drafts him is going to have to be patient with him as he adapts to the NFL. His footwork needs a great deal of coaching as he can be caught getting flat footed in pass protection. His balance in pass protection has been his biggest issue so far as there are too many reps of him falling due to overextending and lunging to make blocks. He relies too much on his power at times when run blocking at the point of attack and has been stood up on rare occasions due to bad fundamentals. His punches, while powerful, can often be inaccurate and timed poorly resulting in shoulder pops and mitigated power and cleaning up this aspect of his game is vital for his overall development. He has trouble with speed rushers that can bend the edge on him and doesn't take good enough angles to ride them out of the pocket because of it. He plays too high out of his stance in pass protection which can leave his chest open for attack as well as mitigate his power at the point of contact in the run game. He has trouble establishing the better leverage in the run game and it gets him into trouble when his guy matches him power for power as he can get halted. Not the most flexible offensive lineman in the draft but he hasn't had to be crazy flexible due to his size. He doesn't know how to properly react to stunts and twists and will need a great deal of coaching to get him ready in the pros. He's not built to play guard in the NFL and could be a risky choice to play left tackle given how new to the position, although anything seems to be possible with Faalele given his quick learning skills at the college level, which hurts his ability to be a versatile offensive lineman. Daniel Faalele was listed at 400+ in 2021 before the college football season took off and despite him playing very well at the weight NFL teams will have to get him hooked with a strict diet to keep his weight in check as he has shown to be able to gain it fast.

I used to think that giant rugby players like Faalele couldn't play offensive lineman due to the nuance of the position, the unorthodox positions player would be put into, and the mental aspect of the game for offensive lineman that could be very difficult to grasp for those who haven't played the sport, and then Jordan Mailata was drafted by Philadelphia late in the 7th round with the 233 pick simply to see because he was, like Faalele, a gargantuan 6'8" and 350 lbs. monster of an athlete and all he's done since is play exceptional football and earn himself a 4 year 64 million contract proving that you don't need a lifetime in the sport to become a great player. Luckily for Faalele, he has some experience that Mailata didn't and he has shown the ability to not only develop quickly but also dominate in college football, even at 400+ lbs. back in 2020. I think if a team drafts him, coaches him up, and exercises patience with him, they could have a pro bowl level offensive tackle. He's a boom or bust prospect for sure, but one with real potential to boom in spectacular fashion. ​