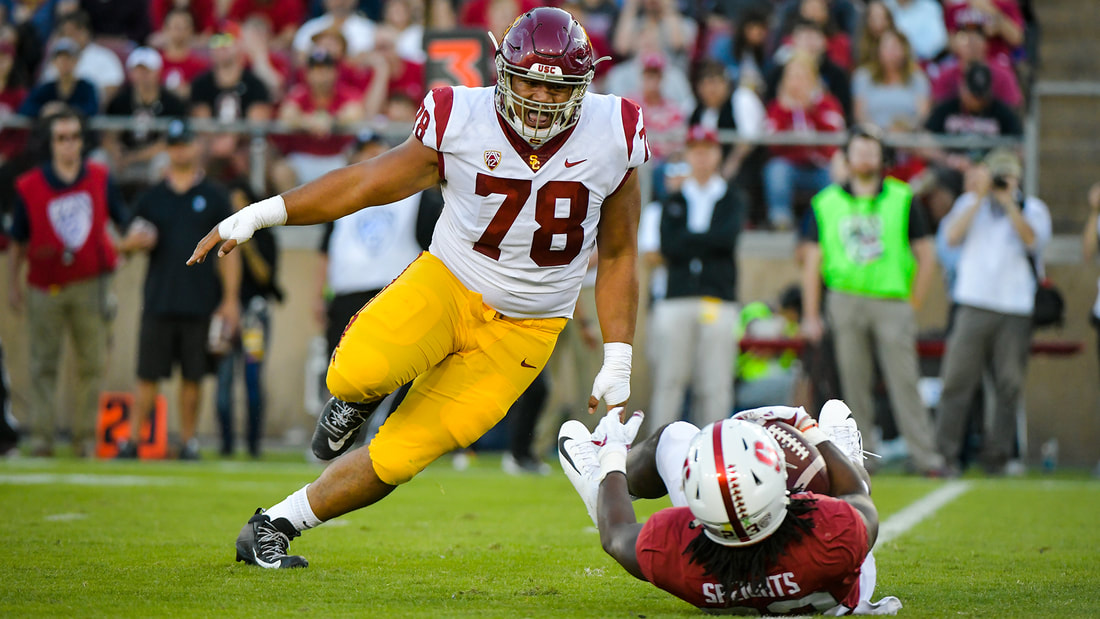 Jay Tufule has been USC's most impressive defensive player over the past couple seasons and if he dominates next season in the PAC-12, he's going to rise up draft boards come April 2021. He's an impressive athlete on tape with very good speed and power in his 6'3" and 315 lbs. frame and it shows on the field. He's a very versatile defensive lineman with the ability to line up as a 3-tech, 1-tech, and even a nose guard if a team needs him to. He's the first guy off the ball on the defensive line and is quick to get into the backfield. He's very good at establishing the better leverage at the snap of the ball and knows how to use it to his advantage. He does a nice job of maintaining his pad level through a game and continually keeping offensive lineman on their toes. He's got a good repertoire of pass rush moves like a swim move, rip move, and bull rush. He's got probably the best lateral agility among the defensive lineman and it shows up in run defense. His explosion when making a tackle in the backfield is otherworldly and is why offenses accounted a lot in the PAC-12. He's got a great motor and plays with a great deal of effort on the field. He's very good at collapsing running lanes and moving down the line quickly to make a play. He's very good at quickly disengaging from blockers and creating pressure on running backs and quarterbacks. He's got some impressive wheels for a man his size, check out the fumble recovery for a touchdown against Utah. He's got exceptional strength in his hands to one-arm tackle ball carriers and rip offensive lineman out of his chest. He has good enough arm length to cause problems for offensive lineman and enough power to drive them back if reaches into their pads. There probably isn't a more consistent defensive lineman in this draft both with his play and production which is a trait that teams really love in a draft prospect. He steps up to the plate in big games and has shown to not be afraid of the spotlight.

He can fall for the draw play or the play fake too often and can leave a rushing lane or a cutback open that can hurt a defense badly. His awareness has to get better from the defensive line when tracking ball carriers because too often he loses the ball carrier. His athletic prowess and technique have yet to appear on the stat sheet which gives me questions about if he can dominate an NFL offense. He is surrounded by quality talent on the USC roster which has given him more opportunities than most players, opportunities he can fail to capitalize on at times. Struggles against longer guards at times and will need to work disengaging their blocks more. He lacks a counter rush game currently and will need to develop if he hopes to win in the NFL.  Too reliant on his natural athleticism at times which can get him into trouble.

Jay Tufele's athleticism and size is going to earn him a lot of fans in war rooms because his potential is through the roof as a 3-down defensive lineman. If he can wow some scouts at USC's pro day with his athleticism I am sure that he'll find himself getting called late in the 1st round.