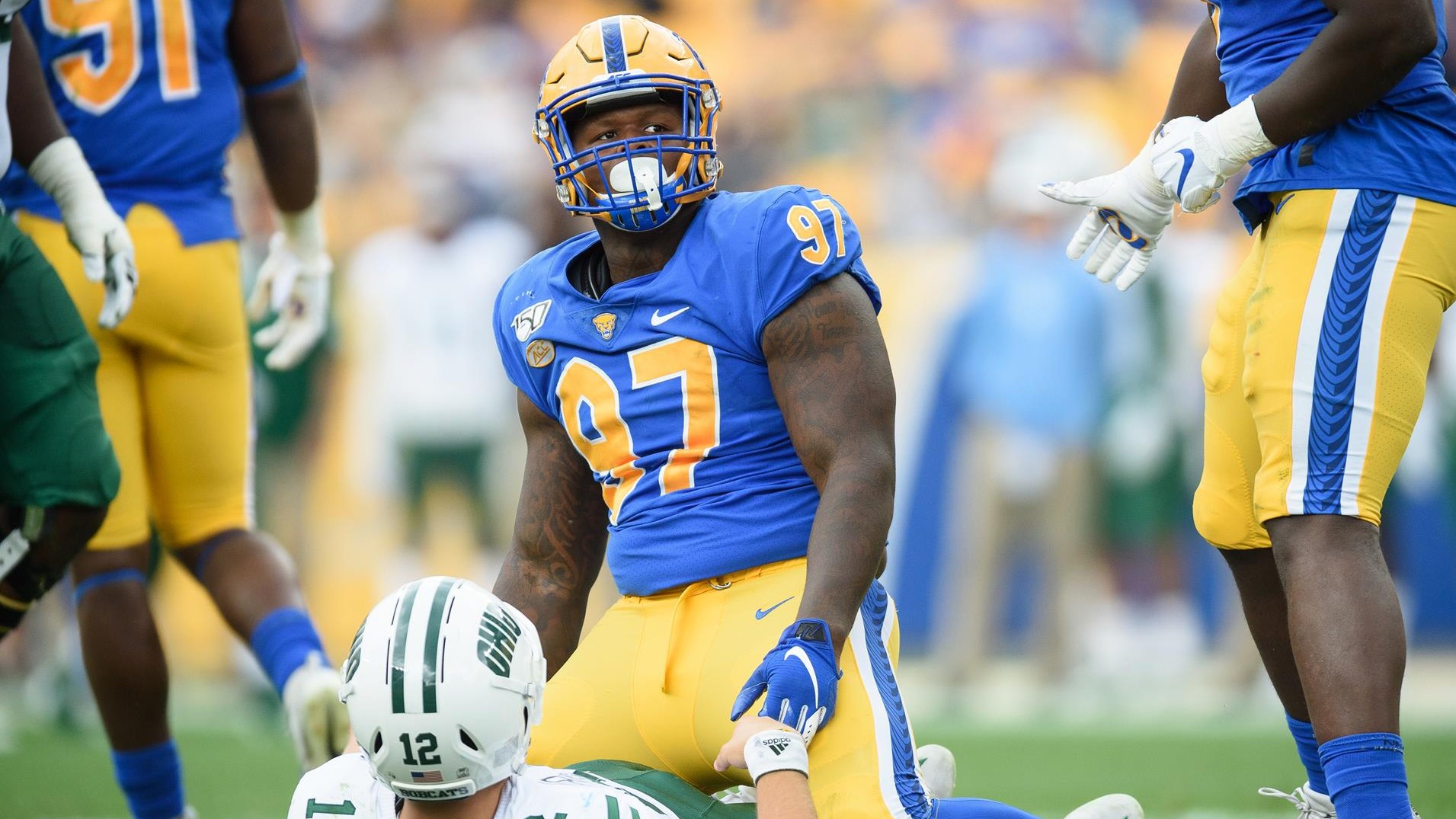 Jaylen Twyman went from a relative no-name player to easily the best pass rushing defensive tackle in the entire country with his unique build and relentlessly quick style of play which no offensive lineman could handle in 2019. At 6'2" and 290 lbs., Twyman is perfectly built to play the 3-tech position in the NFL and is easily one of the more polished pass rushers in the entire draft. He possesses very long arms despite his relatively small stature. He's very strong at the point of attack and very fast and explosive off the line of scrimmage. He possesses a very good arsenal of pass rush moves including a vicious swim move, a rare jump step move that has been made famous by Robert Quinn and Aaron Donald, a stack and shed move that offensive lineman can't seem to defend, an impressive dip and rip move. He's a very good hand fighter and does a great job of keeping offensive lineman out of his pads. He's got a freakish build for a defensive tackle with very little body fat and muscles on top of muscles. He knows how to put moves together and confuse lineman which is why he's so effective at getting into the backfield quickly. His effort and motor are outstanding and is a constant force in the trenches until the game is over. He's great at getting skinny and shooting through gaps in an offensive line which plays very quickly for an offense. Very good at shedding double teams and penetrating the backfield. He can take offensive lineman for a ride with his bull rush if he gets underneath their pads. He's constantly the first guy off the ball and has the agility to wreck a game plan before it starts if not accounted for. He's often in pursuit if the play is away from him and has enough speed to at least stay close to ball carriers. Pittsburgh was one of the best blitzing defenses in college football because of his ability to rush the passer and NFL teams will be taking notice in 2020.

He has a tendency to rise up too quickly and rush the pass rather than use his natural leverage and freaky arm length to get underneath an offensive lineman's pads and that is something I hope to see improved next year. Run defense is a question mark still because of the blitzing tendencies Pittsburgh has allowing his run defense ability to be overshadowed. His size and skill set kind of pigeon-holes him as a 3-tech pass rushing defensive tackle but it would be worth experimenting with him as a defensive end in a 3-4 or even a 4-3 given his freakish athletic ability. Too often gives up on his bull rush and can waste movement trying to shed blocks. Haven't seen much of a counter rush move game most likely due to his ability to win with his first move and I would like to see how he handles getting beaten. Doesn't attack the football enough and rarely deflects passes. He opted out of the 2020 season, leaving the question marks scouts had on him in 2019 unanswered.

If he can show off his athleticism during Pitts pro day and remind everyone why he was such a threatening interior defensive lineman, he could see his stock rise quite a bit. He has the athletic ability and pass rush technique to be a great player, but his opting out of the season has done a number on his draft stock. He could be a steal in the draft if picked by the right team that knows how to utilize his talent.